Marx and the physiocrats 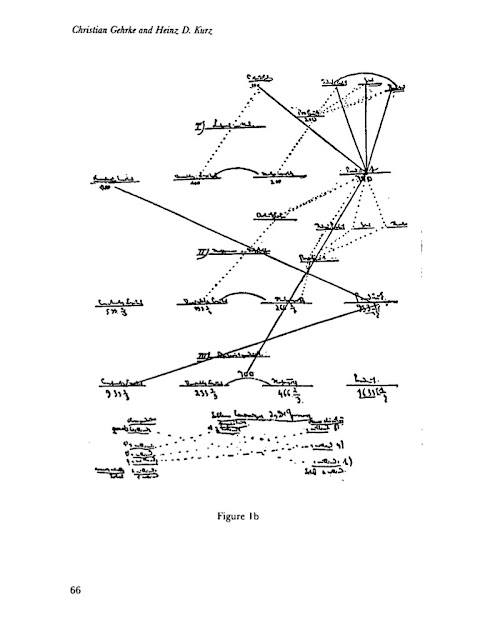 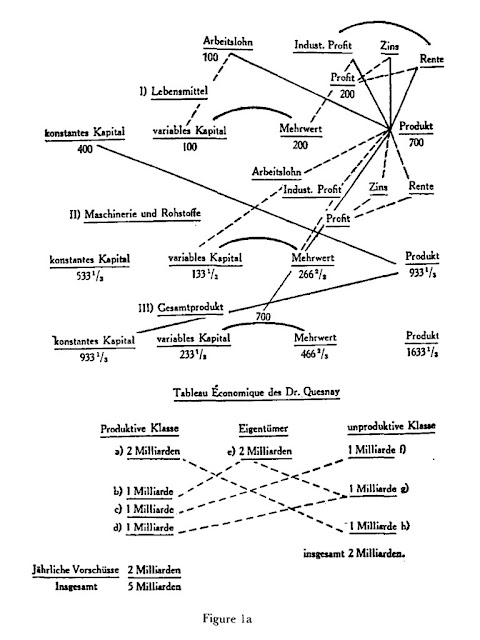 An earlier post highlighted an interesting piece of Marx scholarship by Regina Roth, included in a Routledge collection of important articles on the history of political economy (link). Another article that is of special interest in the Routledge collection is "Karl Marx on physiocracy" by Christian Gehrke and Heinz Kurz (link). The illustrations reproduced above are taken from this article. The first is a diagram, in Marx's own hand, of the process of simple reproduction developed in detail in Capital. The second is Marx's pairing of this same diagram with Quesnay's Tableau economique, suggesting Marx's indebtedness to Quesnay and the physiocrats.

Gehrke and Kurz provide a highly detailed survey of the times and sources through which Marx studied the physiocrats, and the comments and questions that he raised in his working notebooks. They present the results of this analysis in two useful appendices to the article. In the primary text they focus on the most important question: to what extent, and in what specific ways, was Marx influenced by the physiocrats' system?

They find two crucial parallels between Marx and the physiocrats: first, both present a view of a capitalist economy that originates in a theory of surplus value; and second, each presents a view of the economy in terms of a flow of value through various sets of hands. The tableau represent this flow visually and arithmetically, and Marx's schemes of simple reproduction do so algebraically.


The foundation of modern political economy, whose business is the analysis of capitalist production, is the conception of the value of labour-power as something fixed, as a given magnitude -- as indeed it is in practice in each particular case. The minimum of wages therefore correctly forms the pivotal point of Physiocratic theory. They were able to establish this although they had not yet recognised the nature of value itself, because this value of labour-power is manifested in the price of the necessary means of subsistence, hence in a sum of definite use-values. (TSV 1:45)

And in fact, the authors think this is fundamental for Marx's advocacy for the labor theory of value:


To Marx the labour theory of value was not fundamental in the sense that it was considered 'true' independently of whether it served the purpose of providing a logically coherent foundation of the theory of income distribution. Marx endorsed the labour theory of value precisely because be was convinced that it would offer that foundation, that is, allow one to elaborate a logically unassailable theory of the general rate of profit. He held the physiocrats in high esteem also because it was another achievement of theirs which he thought had paved the way to the development of such a theory. The achievement under consideration is the Tableau economique. (62)

What defines the physiocrats for most of us -- their view that the land is the ultimate source of all value -- is for Marx just a minor error of analysis on their part, not a fundamental misconception. Gehrke and Kurz write in paraphrasing Marx:


Scrutinizing carefully the texts of Quesnay, Mirabeau and especially Turgot shows that any surplus product is finally to be traced back to agricultural surplus labour, that is, it has its origin not in the productivity of land, or nature, but in the 'productivity' of the agricultural labourer who produces more than he gets in the form of wages. (60)

Here is the thrust of the second point, the fundamental similarity of the tableau economique and Marx's schemes of reproduction:


Quesnay's Tableau economique shows in a few broad outlines how the annual result of the nation production, representing a definite value, is distributed by means of circulation in such a way that, other things being equal, simple reproduction, i.e., reproduction on the same scale, can take place' (C 11: 363). Marx credits Quesnay with developing the Tableau in terms of 'great functionally determined economic classes of society' and with striking upon 'the main thing, thanks to the limitation of his horizon, within which agriculture is the only sphere of investment of human labour producing surplus-value, hence the only really productive one from the capitalist point of view.' (63)

What isn't entirely clear is the authors' analysis of influence and lineage of ideas. Did Marx's own thinking about surplus value and reproduction derive in some way from the doctrines of the physiocrats? Or did he simply note a pleasing convergence between his own thinking and that of the earliest tradition of classical PE? The authors suggest that the former is the case:


We have seen how much Marx owed the physiocrats for the development of his own views on the laws of production, distribution and circulation governing a capitalist economy. This is the deeper reason why Marx spoke so respectfully of Dr Quesnay and the physiocrats. After all, les economistes were amongst the true forerunners of his own analysis which was in important respects but a metamorphosis and development of theirs. He appears to have been particularly fascinated by the fact that in the physiocratic system, as he saw it, the theory of quantities and growth and the theory of prices and distribution do have a common origin in the concepts of social surplus and production as a circular flow. Marx can indeed be said to have seen through the lens of the physiocratic writings the essence of the duality relationship between the two sets of variables emphasized by later theorists and particularly by John von Neumann . Hence it may be argued that there exists a direct lineage from physiocracy to modern formulations of the classical theory. (73)

But their own chronology suggests Marx had arrived at many of his key economic ideas before he carefully analyzed the physiocrats.

It is worth noting that the availability of digital versions of Marx's manuscripts makes research on questions like this one immensely more efficient than it was in the 1990s when Gehrke and Kurz did their work. The online Archive of Marx and Engels provides digital access to many of Marx's most important works (though not unpublished manuscripts), and it is possible for anyone interested in the role that a certain author or issue played in Marx's thought to trace it quickly using the search functions available. For example, a quick search shows that there are ten mentions of "physiocrat" or derivatives in the Economic and Philosophic Manuscripts (1844). And there are hundreds of such mentions in Theories of Surplus Value.

Grossman's argument is still powrful that Marx's abandonment of his original six book plan for the three major volumes of Capital shows the deep influence of the Physiocrats on him. That is Marx structured Capital in terms of understanding how a surplus product is produced, circulated and distributed. This puts him in absolute debt to the Physiocrats. Remember that the only section of Anti Duhring he wrote was the defense of the Physiocrats.

One of Marx's major criticisms is that the Physiocratic model abstracts from the most important relation of all, the capital relation--the relation between capitalists and workers.

It is often overlooked that Marx thought that theoretical understanding of the basic capital-worker relation was only possible through consideration of the dynamics of reproduction. Marx's idea of reproduction (simple and complex) seems to be a development of the Physiocrats' circular flow. Readers forget that Marx does not wait until Vol II to introduce reproduction. He discusses it in chs 22-3 of Capital volume I.

Here he shows that capital does not advance a wage; rather the wage is a sum of value that the workers have already produced that is withheld unless they agree to conditions under which they will likely produce surplus value again.

That is, only by considering the wage relation in the context of reproduction does it become clear that the workers are being paid with sums of value that they have themselves produced that the rights of property sanction nevertheless sanction being withheld from them at the discretion of capital.

The capital-labor relation is thus hardly an exchange but a juridically-mediated tribute relation.