The West and the East

Ian Morris has written a pair of books that are intended to contribute to a particularly important set of disagreements in comparative economic history: what accounts for the advantage in economic development that seems to be enjoyed by Western Europe at various points in history? The key arguments are presented in  Why the West Rules--for Now: The Patterns of History, and What They Reveal About the Future, and he lays out the quantitative methods and evidence in The Measure of Civilization: How Social Development Decides the Fate of Nations.

The basic argument is that current debates are critically flawed because they consider too short a timespan. Morris is an archaeologist, and he thinks the relevant differences between West and East only become apparent when we consider a timespan that extends backwards in time by at least 15,000 years.

The central analytical tool that Morris introduces is a "social development index" -- an index of four features that can be measured for various social locations at various points in time. The four features are: energy capture, urban development, war fighting capability, information handling capacity. Here is the basic graph that he develops: 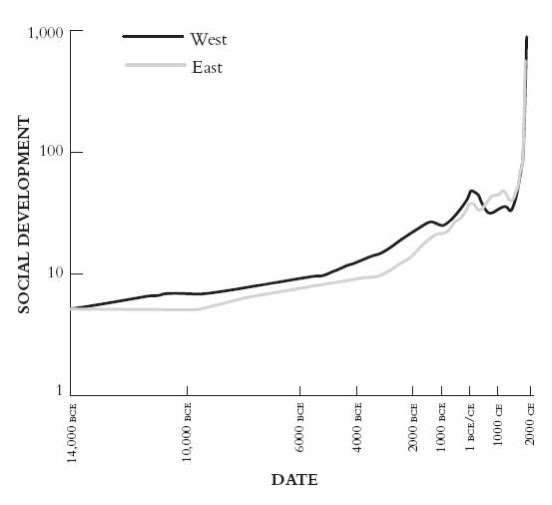 This graph tells a simple story of a horse race: West has a slight but constant advantage from 14,000 BCE to 4,000 BCE, broadening a bit through 2000 BCE. East pulls ahead at the beginning of the Common Era while the West declines sharply and begins to recover only 1400 years later. The West pulls ahead again by about 1700 and maintains a very small lead through the present. This is not a very dramatic story, however. Durning most stretches of this 16,000 year period there is very close alignment between the two trajectories. So it seems hard to imagine that the differences discernible here are in fact decisive historical factors.

Here is one of the primary reversals that occurs on the graph, between 300 BCE and 1100 BCE. 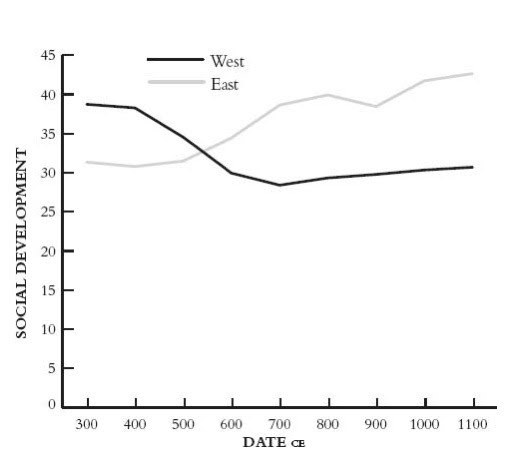 The social development index is interesting in its own terms. The effort to pull prehistoric and ancient archeological data into a consistent system of accounting is interesting, and Morris makes a case for the idea that these four features can be measured with enough precision to permit comparison over long stretches of time. It is "macro history" and "shape of history at a large scale". There is one kind of truth the work supports: there is a generally rising trend in "social development" with occasional crashes and reversals. This is historical research at the most macro scale.

These four factors are significant material indicators of social development. But they do not exhaust the questions we might want to consider. Other measures we might find interesting in this kind of grand sociology include the rise / fall of religions and ideologies; ebb and flow of scope of control of political systems (Victor Lieberman on Burma and France); demographic regimes (high fertility/high mortality); stratification and exploitation (Marx); life quality for the median individual (Sen); and there certainly are others.

So the goal of measuring factors like the ones chosen here over a broad historical expanse is an ambitious and valuable one. However, I don't think the research has the consequences that Morris claims.

First, it isn't really posing the same kind of question as that confronted by Pomeranz and Bin Wong. The comparative economic history question is superficially similar to the one the author asks -- how do Eurasian cores perform 1500-2000? But the real questions are quite different. Fundamentally they want to open the  black box of institutions, ideology, and circumstance to account for 50- or 100-year shifts. Historians like Perdue and Pomeranz really want to know about the contingencies of history, and that seems to imply a shorter timescale.

So I don't think it's really on the subject suggested by the title. Its real subject is this: "there are very longterm differences between the two large cores in terms of material levels and rates of development." But it doesn't offer an explanation of why this should be so: earliest timing, material advantages of one core over another, contingent path dependencies, ... Likewise the suggestions about projection onto the coming century are overblown.

Moreover, the analysis is not explanatory; really it is a redescription of the phenomena. It doesn't even invoke explanatory factors. Geography? First comer advantage? Morris believes he has the key to a large scale explanation:

Why had the West got the Maxim gun [technology and war fighting advantage] when the rest had not? (Kl 286)

But I don't find that his "long tendencies of social development" picture actually helps in answering this question; rather, it simply repeats the phenomenon to be explained.

Morris categorizes existing theories of comparative economic development as "long-term lock-in" and "short-term accident" theories. And he suggests that his own approach doesn't fall in either category. It is indeed longterm; but it shows variation over the longterm, so it doesn't postulate "lock-in". And it disagrees with the accident theory because, essentially, he doesn't think there is a lot of contingency and path dependency in the story he tells. The material factors that drive the shape of the master graph are primary, and trump the effects of lesser factors like institutions and culture.

The question [of why the West rules] requires us to look at the whole sweep of human history as a single story, establishing its overall shape, before discussing why it has that shape. This is what I try to do in this book, bringing a rather different set of skills to bear. (Kl 460)

In fact, Morris's account literally doesn't tell us a thing about culture or institutions. But these are the things historians want to understand. For Morris, however, these are dependent variables in the long story of problem solving the author wants to tell. (See KL 4377)

So my overall reaction is that this is an interesting piece of research that answers a different question than the one its author highlights. It provides a very interesting view of the "shape" of human history in the two mega-regions; the attempt to measure what the author calls social development is one interesting cut on longterm historical development. But it really isn't a good way of understanding the relationship between East and West when it comes to comparative economic development. It doesn't identify the more proximate factors that led to surges and plateaux of development in the two trajectories. And yet that is really what the debate is all about.