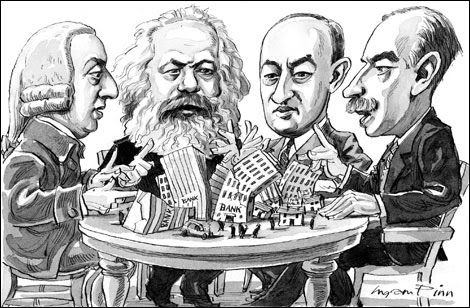 The discipline of economics has a high level of intellectual status, even hegemony, in today’s social sciences — especially in universities in the United States. It also has a very specific set of defining models and theories that distinguish between “good” and “bad” economics. This situation suggests two topics for research: how did political economy and its successors ascend to this position of prestige in the social sciences? And how did this particular mix of techniques, problems, mathematical methods, and exemplar theoretical papers come to define the mainstream discipline? How did this governing disciplinary matrix develop and win the field?

One of the most interesting people taking on questions like these is Marion Fourcade. Her Economists and Societies: Discipline and Profession in the United States, Britain, and France, 1890s to 1990s  was discussed in an earlier post (link). An early place where she expressed her views on these topics is in her 2001 article, “Politics, Institutional Structures, and the Rise of Economics: A Comparative Study” (link). There she describes the evolution of economics in these terms:

Since the middle of the nineteenth century, the study of the economy has evolved from a loose discursive "field," with no clear and identifiable boundaries, into a fully "professionalized" enterprise, relying on both a coherent and formalized framework, and extensive practical claims in administrative, business, and mass media institutions. (397)

And she argues that this process was contingent, path-dependent, and only loosely guided by a compass of “better” science:

Overall,contrary to the frequent assumption that economics is a universal and universally shared science, there seems to be considerable cross-national variation in (1) the and nature of the institutionalization of an economic knowledge field, (2) the forms of professional action of economists, and (3) intellectual traditions in the of economics. (398)

Fourcade approaches this subject as a sociologist; so she wants to understand the institutional and structural factors that led to the shaping and stabilization of this field of knowledge.

Understanding the relationship between the institutional and intellectual aspects of knowledge production requires,first and foremost,a historical analysis of the conditions under which a coherent domain of discourse and practice was established in the first place. (398)

A key question in this article (and in Economists and Societies) is how the differences that exist between the disciplines of economics in France, Germany, Great Britain, and the US came to be. The core of the answer that she gives rests on her analysis of the relationships that existed between practitioners and the state: "A comparison of the four cases under investigation suggests that the entrenchment of the economics profession was profoundly shaped by the relationship of its practitioners to the larger political institutions and culture of their country" (432). So differences between economics in, say, France and the United States, are to be traced back to the different ways in which academic practitioners of economic analysis and policy recommendations were situated with regard to the institutions of the state.

It is possible to treat the history of ideas internally ("systems of ideas are driven by rational discussion of their implications") and externally ("systems of ideas are driven by the social needs and institutional arrangements of a certain time"). The best sociology of knowledge avoids this dichotomy, allowing for both the idea that a field of thought advances in part through the scientific and conceptual debates that occur within it and the idea that historically specific structures and institutions have important effects on the shape and direction of the development of a field. Fourcade avoids the dichotomy by treating seriously the economic reasoning that took place at a time and place, while also searching out the institutional and structural factors that favored this approach or that in a particular national setting.

This is sociology of knowledge done at a high level of resolution. Fourcade wants to identify the mechanisms through which "societal institutions" influence the production of knowledge in the four country contexts that she studies (Germany, Great Britain, France, and the US). She does not suggest that economics lacks scientific content or that economic debates do not have a rational structure of argument. But she does argue that the configuration of the field itself was not the product of rational scientific advance and discovery, but instead was shaped by the institutions of the university and the exigencies of the societies within which it developed.

Fourcade's own work suggests a different kind of puzzle -- this time in the development of the field of the sociology of knowledge. Fourcade's topic seems to be one that is tailor-made for treatment within the terms of Bourdieu's theory of a field. And in fact some of Fourcade's analysis of the institutional factors that influenced the success or failure of academic economists in Britain, Germany, or the US fits Bourdieu's theory very well. Bourdieu's book Homo Academicus appeared in 1984 in French and 1988 in English. But Fourcade does not make use of Bourdieu's ideas at all in the 2001 article -- some 17 years after Bourdieu's ideas were published.  Reference to elements of Bourdieu's approach appears only in the 2009 book. There she writes:

Bourdieu found that the social sciences occupy a very peculiar position among all scientific fields in that external factors play an especially important part in determining these fields' internal stratification and structure of authority.... Within each disciplinary field, the subjective (i.e., agentic) and objective (i.e., structural) positions of individuals are "homologous": in other words, the polar opposition between "economic" and "cultural" capital is replicated at the field's level, and mirrors the orthodoxy/heterodoxy divide. (23)

So why was Bourdieu not considered in the 2001 article? This shift in orientation may be simply a feature of the author's own intellectual development. But it may also be diagnostic of the rise of Bourdieu's influence on the sociology of knowledge in the 90's and 00's. It would be interesting to see a graph of the frequency of references to the book since 1984.

(Gabriel Abend's treatment of the differences that exist between the paradigms of sociology in the United States and Mexico is of interest here as well; link.)