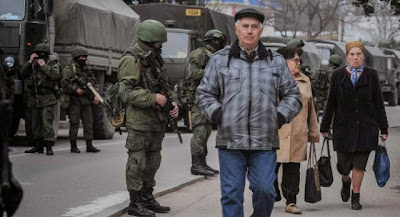 The Crimea is now securely within the grasp of Russia. This shift occurred as the result of the use of military force seemingly unconcerned about international law or opinion, the world objected, and Russia prevailed. Why is this kind of forcible seizure of territory not more common in contemporary international affairs? There are other places in the world where imbalanced states disagree about boundaries, resources, or ethnic populations; why is Russia's unconcerned use of force to gain its ends not more common? And, given its success and relatively low cost to the aggressor in this case, should we expect more such adventurism -- for example, in the South China Sea or in the Arctic?

One part of this question comes down to realpolitik and careful accounting of the costs and benefits of military action by the potential aggressor. How probable is success? Will there be concerted opposition and significant loss of life? How important is the prize?  Often enough this calculation will lead to restraint: the consequences may be unpredictable, the value of the prize may be minimal, and the target state may have enough deterrent military force to raise the stakes. But it is also true that aggressors are imperfectly rational and may be prone to discounting future costs and risks.

Another part of the question comes down to the rising value of multilateral organizations and agreements to the potential aggressor. The value of the prize may be small in comparison to the damage done to existing multilateral relationships. Disruption of trade, banking, investment, and stock exchanges may lead to costs far exceeding the short-term benefits of aggression.  (One of the first steps taken against Russia was the rescheduling of the G8 conference from Sochi to Brussels, and exclusion of Russia from the meeting.) This points to the possible stabilizing effects of globalization. The potential costs of one-off aggression may themselves include a large global component.

A third possible factor is the normative regime of non-aggression, respect for national sovereignty, and respect for human rights that underlies the development of the United Nations, the European Union, and other institutions of international law since World War II. It may be speculated that regime decision-makers have a degree of reluctance in directly flouting this set of international norms. Governments need legitimacy, and flouting international norms undermines this form of capital. But this effect seems pretty weak; just consider the impunity of the Syrian government in its use of chemical weapons against its own population. The use of force by the Soviet Army against Hungary and Czechovlakia was condemned but successful. And remember Stalin's comment: How many divisions does the Pope have?

So realpolitik calculations make aggression sometimes a favored choice, and multilateral retaliation and the indirect effects of violations of international norms provide for a degree of restraint. Do these contrary forces produce a relatively stable world system?  Unfortunately, the inhibitory effects are diffuse and readily discounted by the Saddams, Putins, and Assads of our world. So we might draw these considerations into a broad prediction: when a powerful state has an important interest in territory possessed by a weak neighbor, in circumstances where it is unlikely that the weak state will make a meaningful armed response, the combination of the deterrence value of international disapproval and the violation of international norms will often be too weak to deter the potential aggressor. And this in turn puts the spotlight on eastern Ukraine: why are all those Russian forces mustered at the border?

Certainly this topic receives plenty of attention within international relations theory. Much IR theory has couched its thinking in bilateral terms -- essentially the alignments of the Cold War. Perhaps we have entered a new strategic environment, however, where the stability created by a bilateral world divided between two major powers is degrading into a possible period of one-off acts of aggression. (Hilton Root offers a treatment of the greater complexity of international relations today in Dynamics among Nations: The Evolution of Legitimacy and Development in Modern States; link.)

This seems like an interesting subject for an agent-based model. Populate a map with large and small territories with powerful and weak military forces; postulate a decision rule for the leaders that places national security as the leading priority and that encompasses the costs of multilateral disapproval and loss of legitimacy brought about by naked aggression; and play the scenario forward. How much aggression will we see?
Posted by Dan Little at 8:43 AM

Email ThisBlogThis!Share to TwitterShare to FacebookShare to Pinterest
Labels: globalization