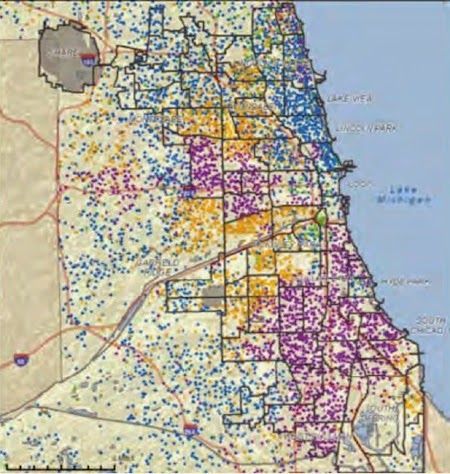 What kinds of interface or bridging are possible between these two levels of social research?

Take the example of race studies. Both qualitative and quantitative research studies have been conducted in this field, with the goal of shedding light on the phenomenon of race in American society. Quantitative research has often been concerned to identify the features of inequality which are associated with race within American populations, including income, wealth, education, health, employment, and other important features. For example, the National Survey of Black Americans provides voluminous data on a range of characteristics of African American individuals, with surveys extending from 1979 to 1992 (link). Here is a list of the variables included in these studies (link). Several hundred research studies and reports have been completed making use of these data sets; here is a representative study by James Jackson making use of data sets like these to probe health disparities by race (link). These quantitative studies permit the researcher to use advanced statistical tools to measure and evaluation the strength of associations among characteristics and to evaluate causal hypotheses about the linkages that exist among characteristics.

Qualitative research on race takes several forms. There are ethnographic studies, through which the researcher attempts to identify the phenomenology and lived experience of race. Here I would include several research efforts that have been discussed here previously -- Al Young's study of young inner city Chicago men (The Minds of Marginalized Black Men: Making Sense of Mobility, Opportunity, and Future Life Chances) and Loïc Wacquant's ethnographic study of a boxing club on Chicago's south side (Body and Soul: Notebooks of an Apprentice Boxer). There are theoretical studies, which explore possible structures or mechanisms which produces racial and racialized behavior and disparities. Here is a good example from Elizabeth Cole on the construct of intersectionality as a way of theorizing about racial and gender identities (link). And there are studies of social psychology designed to identify the ways in which racial attitudes, presuppositions, and ideas contribute to behavior in American society. Here is a nice example of such an analysis by Lawrence Bobo and Cybelle Fox (link).

It is clear that studies based on all of these methodologies are insightful and valuable. We will arrive at a better understanding of the meaning and causal importance of "race" through all these approaches. The question raised above remains an important one, however: how should we think about the relations among these bodies of inquiry and knowledge?

One way is to think in terms of levels of analysis (link): we might say that quantitative studies examine facts about race at a more macro level (large populations), whereas qualitative studies are more meso- or micro-level studies. This isn't a very satisfactory view, however, because each of these approaches is concerned about individual-level facts; what differs is the level of aggregation of those facts that is chosen.

Another approach seems more promising: to consider the suite of qualitative studies of race as being a tool box for identifying the social mechanisms through which the patterns and associations that are discovered at the large population level come about. Qualitative studies (studies aimed at discovering or theorizing the mentalities and behaviors through which race is constructed and carried out) permit us to understand racialized behavior in groups that in turn allow us to understand the population outcomes that quantitative studies identify.

My own predilection is to think of the qualitative approaches as providing insight into how various social processes work; how it is that socially constructed actors bring about the patterns of behavior and outcome we observe at various levels of aggregation. A quantitative study of racial attitudes might suggest that cities with effective public transportation have higher (or lower) levels of racial mistrust across groups. We would want to be able to form some hypotheses about what the underlying behaviors and attitudes are that bring about this effect. What are the mechanisms through which access to public transportation influences racial trust? And for this kind of inquiry to be possible, we need to have some good empirical theories about racial identities and mental frameworks.

So it does in fact seem both possible and desirable to try to integrate the findings of both quantitative and qualitative studies of racial attitudes; and this finding seems equally valid in almost all areas of the social sciences.

(Thanks to Mosi Ifatunji for his stimulating seminar at the University of Michigan on new approaches to the study of black ethnic disparities, which caused me to think about this topic a little further. Here is Mosi's webpage with some links to his work; link.)
Posted by Dan Little at 10:03 PM

In research data services, yet another important phase is the part where researcher spot trends in data. Trend is something when one notices that with a specific input, data tends to drift toward a particular value. See more qualitative research analysis

Data analysis is can be basically defined as the procedure of examining data, processing it, modifying and revising the information with only one purpose in mind to make the entire procedure of making a decision worthwhile with the help of pertaining data and coming to a solid conclusion. See more qualitative and quantitative data analysis