There is a very lively body of work emerging in the intersection between computational mathematics and various fields of the social sciences. This emerging synergy between advanced computational mathematics and the social sciences is possible, in part, because of the way that social phenomena emerge from the actions and thoughts of individual actors in relationship to each other. This is what allows us to join mathematics to methodology and explanation. Essentially we can think of the upward strut of Coleman’s boat — the part of the story that has to do with the “aggregation dynamics” of a set of actors — and can try to create models that can serve to simulate the effects of these actions and interactions. 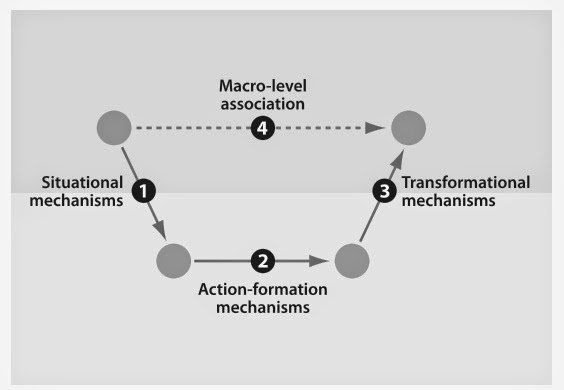 Here is an interesting example in the form of a research paper by Rahul Narain and colleagues on the topic of modeling crowd behavior ("Aggregate Dynamics for Dense Crowd Simulation", link). Here is their abstract:

Large dense crowds show aggregate behavior with reduced individual freedom of movement. We present a novel, scalable approach for simulating such crowds, using a dual representation both as discrete agents and as a single continuous system. In the continuous setting, we introduce a novel variational constraint called unilateral incompressibility, to model the large-scale behavior of the crowd, and accelerate inter-agent collision avoidance in dense scenarios. This approach makes it possible to simulate very large, dense crowds composed of up to a hundred thousand agents at near- interactive rates on desktop computers.

Federico Bianchi takes up this intersection between computational mathematics and social behavior in a useful short paper called "From Micro to Macro and Back Again: Agent-based Models for Sociology" (link). His paper focuses on one class of computational models, the domain of agent-based models. Here is how he describes this group of approaches to social explanation:

An Agent-Based Model (ABM) is a computational method which enables to study a social phenomenon by representing a set of agents acting upon micro-level behavioural rules and interacting within environmental macro-level (spatial, structural, or institutional) constraints. Agent-Based Social Simulation (ABSS) gives social scientists the possibility to test formal models of social phenomena, generating a virtual representation of the model in silico through computer programming, simulating its systemic evolution over time and comparing it with the observed empirical phenomenon. (1)

And here is how he characterizes the role of what I called "aggregation dynamics" above:

Or in other words, the task of analysis is to provide a testable model that can account for the way the behaviors and interactions at the individual level can aggregate to the observed patterns at the macro level.

Another more extensive example of work in this area is Gianluca Manzo, Analytical Sociology: Actions and Networks. Manzo's volume proceeds from the perspective of analytical sociology and agent-based models. Manzo provides a very useful introduction to the approach, and Peter Hedstrom and Petri Ylikoski extend the introduction to the field with a chapter examining the role of rational-choice theory within this approach. The remainder of the volume takes the form of essays by more than a dozen sociologists who have used the approach to probe and explain specific kinds of social phenomena.

Manzo provides an account of explanation that highlights the importance of "generating" the phenomena to be explained. Here are several principles of methodology on this topic:

So agent-based modeling simulations are a crucial part of Manzo's understanding of the logic of analytical sociology. As agent-based modelers sometimes put the point, "you haven't explained a phenomenon until you've shown how it works on the basis of a detailed ABM." But the ABM is not the sole focus of sociological research, on Manzo's approach. Rather, Manzo points out that there are distinct sets of questions that need to be investigated: how do the actors make their choices? What are the structural constraints within which the actors exist? What kinds of interactions and relations exist among the actors? Answers to all these kinds of question are needed if we are to be able to design realistic and illuminating agent-based models of concrete phenomena.

Here is Manzo's summary table of the research cycle (8). And he suggests that each segment of this representation warrants a specific kind of analysis and simulation. 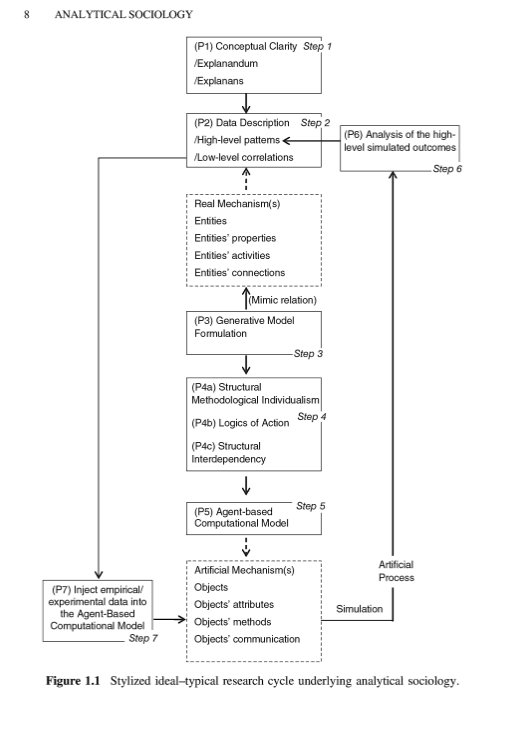 This elaborate diagram indicates that there are different locations within a complex social phenomenon where different kinds of analysis and models are needed. (In this respect the approach Manzo presents parallels the idea of structuring research methodology around the zones of activity singled out by the idea of methodological localism; link.) This is methodologically useful, because it emphasizes to the researcher that there are quite a few different kinds of questions that need to be addressed in order to successfully explain a give domain of phenomena.

The content-specific essays in the volume focus on one or another of the elements of this description of methodology. For example, Per-Olof Wikstrom offers a "situational action theory" account of criminal behavior; this definition of research focuses on the "Logics of Action" principle 4b.

People commit acts of crime because they perceive and choose (habitually or after some deliberation) a particular kind of act of crime as an action alternative in response to a specific motivation (a temptation or a provocation). People are the source of their actions but the causes of their actions are situational. (75)

Wikstrom attempts to apply these ideas by using a causal model to reproduce crime hotspots based on situational factors (90).

The contribution of Gonzalez-Bailon et al, "Online networks and the diffusion of protest," focuses on the "Structural Interdependency" principle 4c.

One of the programmatic aims of analytical sociology is to uncover the individual-level mechanisms that generate aggregated patterns of behaviour.... The connection between these two levels of analysis, often referred to as the micro-macro link, is characterised by the complexity and nonlinearity that arises from interdependence; that is, from the influence that actors exert on each other when taking a course of action. (263)

Their contribution attempts to provide a basis for capturing the processes of diffusion that are common to a wide variety of types of social behavior, based on formal analysis of interpersonal networks.

Networks play a key role in diffusion processes because they facilitate threshold activation at the local level. Individual actors are not always able to monitor accurate the behavior of everyone else (as global thresholds assume) or they might be more responsive to a small group of people, represented in their personal networks. (271)

They demonstrate that the structure of the local network matters for the diffusion of an action and the activation of individual actors.

In short, Analytical Sociology: Actions and Networks illustrates a number of points of intersection between computational mathematics, simulation systems, and concrete sociological research. This is a very useful effort as social scientists attempt to bring more complex modeling tools to bear on concrete social phenomena.