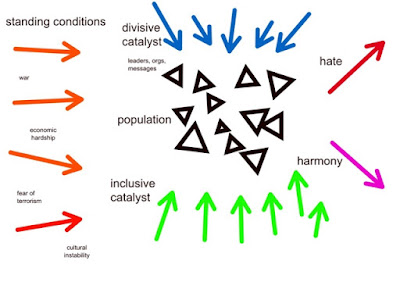 Many countries are facing a detestable resurgence of racism and ethnic hostility in the current political environment, catalyzed in complicated ways by the refugee crisis in Europe, the Brexit vote in the UK, and the rise of trumpism in the United States. Animosity against black and brown people, immigrants, and Muslims is rising in many countries, and hate crimes and racist acts against excluded groups are on the rise as well. For many observers these developments are as surprising and as worrisome as the rise of virulent nationalism and anti-semitism in Germany in the 1930s -- a new politics of cultural despair (link). We thought perhaps we had moved to a democratic consensus in advanced democracies, moving beyond hatred and nativism, and we plainly have not.

What are the social and psychological dynamics at work that have unleashed these dark forces within democracies? (Here is an earlier post on hate; link.) What roles are played in these processes by some of the likely influencers: broadcast and print media, social media, political entrepreneurs with a political interest in cultivating hate and divisiveness, social networks, civic and anti-civic organizations, slow economic growth and mobility for some groups, and the fear of Isis violence around the world?
Some of these possible factors are external environmental conditions -- terrorism, economic crisis -- that influence individual political dispositions. Others are structural features of the societies we live in -- freedom of association for hate groups, dense social networks of like-minded people, information diffusion systems like media and transportation. And yet others are features of political intentionality -- leaders who deliberately foster fear, hate, and suspicion for their own political purposes, organizations that mobilize their members around divisiveness and suspicion.
Underlying it all is a profound set of questions about identity and political psychology. What are some key features of individual psychology that play into the dynamics of division and hate within a modern society? Are there common human psychological dispositions that leave people vulnerable to the appeal of hate against other groups in society? Is there a profile of democratic resilience that makes some people more tolerant and positive about their fellow citizens? (This resilience seems to be one of the characteristics deliberately cultivated by architects of European identity; link.) And are there known mechanisms of persuasion and inculcation that play up hate and reduce the impulse to resilience and tolerance -- an effective fascist rhetoric?
One such mechanism of social division seems apparent in contemporary events -- lies and aspersions against one group or another by leaders of divisive organizations (IKIP, the Trump campaign). And this in turn seems to reveal a central factor in the dynamics of hate in a mass society: the relative balance of trust and suspicion found in individuals and groups. Trust encourages tolerance and mutual respect; suspicion and fear encourage retrenchment, opposition, and hate. So a leader or party interested in bringing about a politics of hate will find it useful to raise suspicion about the target group.

Another plausible mechanism is the idea that people's thoughts and behaviors are calibrated to "normal", and when public figures begin using more explicitly racist language, ordinary followers begin to drift in that direction as well. (It seems evident that conservatives' public denunciations of President Obama in disrespectful and racist terms since his election in 2008 have loosened a broader public willingness to engage in racist speech as well.) There may be a positive feedback loop in which small racisms breed large racisms.
A fairly compact narrative of the evolution of hate in a particular society might go along these lines, represented in the diagram above. Most individuals have a psychology that is capable of both tolerance and hate. This psychology can be activated in one direction or the other by intentional political actors. Large-scale shift of attitudes requires some external threat that can be exploited by the party of hate. Economic crisis and terrorism can play this role. Hateful messages can be constructed by leaders through a variety of avenues, including public media, covert organizations, and political parties. Skill at framing messages of division and suspicion has the potential of activating latent grievances into active grievances. A few provocative incidents have the potential to create a widening cycle of suspicion, mistrust, and hate.
It seems clear that these processes could be modeled using an agent-based model if we liked; they have much in common with the mechanisms of pandemic disease. The cognitive and emotional processes influencing social trust and social suspicion could be modeled fairly simply as well.
The diagram above offers a simple view of a possible causal structure of the emergence of hate in a population. The standing conditions change over time but influence the mindset and dispositions of individuals in the population in a period of time. Individuals are subject to mobilization appeals and messages from leaders and organizations, and they interact with each other. Depending on the contingent contest of messages in the middle of the diagram, a climate of either hate or harmony ensues.
The diagram also gives a basis for a theory of a "public health policies for inclusiveness" -- a set of interventions that could make the emergence of widespread hate less likely. Reduce the footprint of the organizations of hate and intolerance; build confidence across communities in the trustworthiness of each community; undermine and challenge the messages of exclusion and suspicion that are the nuts and bolts of racist mobilization; discredit the leaders of the divisive movement. In a democracy there are clear limits that restrict each of these strategies, but there are certainly legitimate ways of proceeding.
There is a surprising lack of attention to these kinds of social processes within sociology today. Michael Mann's work on murderous ethnic cleansing in The Dark Side of Democracy: Explaining Ethnic Cleansing is relevant, but the core of Mann's theory doesn't fit very well the situations of Europe or North America today. Moreover, Mann doesn't have a lot to say about the spread of ethnic hostility -- the mechanics of ethnic mobilization -- in the cases he considers in detail. He believes that ethnic cleansing is a modern development, linked with emerging democracies. But he doesn't appear to be interested in the questions of political and cultural psychology -- the ways in which ordinary variations in personal attitudes and beliefs are sometimes transformed into rising levels of suspicion and animosity towards members of other groups in ambient society.
So it seems as though a contemporary sociology of hate, nativism, and nationalism remains to be written. And it is urgent that we turn to that task, given the assaults on liberal, inclusive cosmopolitan communities currently underway in Britain, Western Europe, India, and the United States.
Posted by Dan Little at 5:51 AM

This is a good overview of many potential factors.

I often wonder here in Australia, where similar trends are emerging, whether part of the problem is that the 'standing conditions' are not given a lot of sympathetic media time.
It is common here to hear messages of inclusiveness and tolerance - the high road - but these could be interpreted as a callousness toward genuine structural concerns (loss of job, house etc.) and can breed distrust when this message is dominant.

Resilience has been a catch all panacea for everything the last few years, but it is certainly something interesting to think about in this context.


I have also long been curious why you have a .com.au address.

Thanks for your thoughtful comments! When I mention resilience I'm thinking of a feature of the individual's social agency -- an attitude towards others that is not so rigid. As for Austria -- I'm attending the International Sociological Association next week in Vienna -- interesting panel on rational choice and Amsterdam and analytical sociology.

To take a Freudian approach,social change upsets ordinary people's inner configuration,and antisocial feelings otherwise held in or sublimated, find expression in new ways.
Also when people's sense of normality and boundaries are violated, they lash out.
Let me add, Freud's ideas can be fine tuned and borrowed and not swallowed whole.
Your model, for me, needs to emphasize more, how these factors translate into personal experiences.
Just like in the Bible a Pharaoh came into power who did not know Joseph, so we have drifted into a new scene in world history, and our job in solving this particular problem, is tied in with figuring out, just what the hell is going on here.
What more, the world is in a dynamic disequilibrium in multiple ways- in other words there is little solid to hold steady, there are multiple unknown variables and the system as a whole and subsystems are chaotic.
Or am I a victim of undue pessimism?

Thanks, Howard. These are some of the issues and mechanisms we need to grapple with in a serious way. Your perception of multiple sources of finalizing instability seems accurate to me. Dan