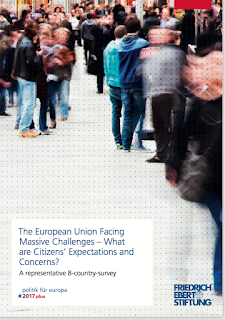 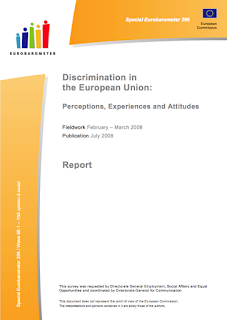 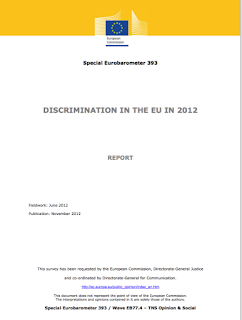 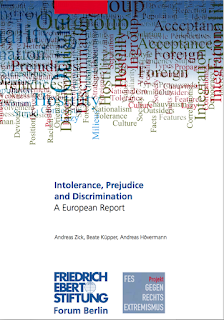 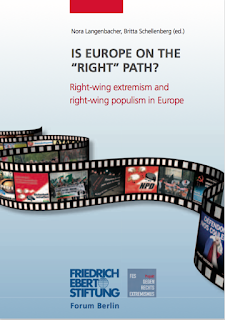 European research and policy organizations have devoted a fair amount of attention to the rise of extremist movements and intolerance in European countries in the past ten years. Attention has been directed towards both aspects of the problem that have been mentioned in earlier posts -- rising public attitudes of intolerance, and the mobilization and spread of hate-based right-wing organizations. (The topic has also received a great deal of attention in the press -- for example, in the Guardian (link), the New York Times (link), and Spiegel (link).)

One useful report is Intolerance, Prejudice and Discrimination: A European Report (link), authored by Andreas Zick, Beate Kupper, and Andreas Hovermann (Friedrich Ebert Stiftung, 2011). The study is based on survey research in eight countries (Germany, Britain, France, Netherlands, Italy, Portugal, Poland, and Hungary). Particularly interesting are the results on anti-semitism, anti-muslimism, and homophobia (56 ff.). Here are the opening paragraphs of the authors' foreword:


Intolerance threatens the social cohesion of plural and democratic societies. It reflects the extent to which we respect or reject social, ethnic, cultural and religious minorities. It marks out those who are “strange”, “other” or “out- siders”, who are not equal, less worthy. The most visible expression of intolerance and discrimination is prejudice. Indicators of intolerance such as prejudice, anti-democratic attitudes and the prevalence of discrimination consequently represent sensitive measures of social cohesion.

Investigating intolerance, prejudice and discrimination is an important process of self-reflection for society and crucial to the protection of groups and minorities. We should also remember that intolerance towards one group is usually associated with negativity towards others. The European Union acknowledged this when it declared 1997 the European Year against Racism. In the 1997 Treaty of Amsterdam the European Union called for joint efforts to combat prejudice and discrimination experienced by groups and individuals on the basis of their ethnic features, cultural background, religion, gender, sexual orientation, age or disability. (11)

And here are a few of their central findings, based on survey research in these eight countries:


Group-focused enmity is widespread in Europe. It is weakest in the Netherlands, and strongest in Poland and Hungary. With respect to anti-immigrant attitudes, anti-Muslim attitudes and racism there are only minor differences between the countries, while differences in the extent of anti-Semitism, sexism and homophobia are much more marked.

About half of all European respondents believe there are too many immi- grants in their country. Between 17 percent in the Netherlands and more than 70 percent in Poland believe that Jews seek to benefit from their forebears’ suffering during the Nazi era. About one third of respondents believe there is a natural hierarchy of ethnicity. Half or more condemn Islam as “a religion of intolerance”. A majority in Europe also subscribe to sexist attitudes rooted in traditional gender roles and demand that: “Women should take their role as wives and mothers more seriously.” With a figure of about one third, Dutch respondents are least likely to affirm sexist attitudes. The proportion opposing equal rights for homosexuals ranges between 17 percent in the Netherlands and 88 percent in Poland; they believe it is not good “to allow marriages between two men or two women”. (13)

These researchers find three underlying "ideological orientations" associated with these patterns of intolerance and discrimination: authoritarianism, "social dominance orientation", and the rejection of diversity. And the factors that work against intolerance include "trust in others, the ability to forge firm friendships, contact with immigrants, and above all a positive basic attitude towards diversity" (14).

The topic of the incidence of intolerance in European countries is also the subject of research in the Eurobarometer project. Here are two Eurobarometer reports from 2008 and 2012 that attempt to measure changes in levels of discrimination and prejudice (Discrimination in the European Union, 2008; link; 2012; link).

Also from the Friedrich Ebert Stiftung is the report Is Europe on the "Right" Path?: Right-wing extremism and right-wing populism in Europe (link). This report provides country studies of the radical right in Germany, France, Britain, Netherlands, Italy, Switzerland, Spain, Bulgaria, Poland, Hungary, Denmark, Sweden, and Norway. Here is how Britta Schellenberg undertakes to synthesize these wide-ranging findings:


Taken as a whole, the contributions in the present volume clearly illustrate the common features and differences within the radical right in Europe. Analyses of the current phenomenon of the various radical-right movements and a differentiated analysis of their origins are fundamental for considering counter-strategies. Obviously, there is no single, generally valid strategy that guarantees an optimal way of combating the radical right. In fact, strategies can be successful only if they match up to the specific political and social context and if the maximum possible number of players from politics, the legal system, the media, educational institutions and civil society are agreed upon them.

However, we can identify general requirements for strategies against right-wing extremism and xenophobia that form a framework broad enough to allow a European perspective. For concrete work in a particular place, this framework must be filled out with individual measures and activities specific to the situation and location. But for now, we shall now proceed to take a bird’s eye view and answer the basic questions as to what preconditions have to be created for maximum success in combating radical-right-wing attacks, parties and attitudes. (309)

Each country study is detailed and interesting. The France study focuses on the Front National and Jean-Marie Le Pen's success (and later Marine Le Pen's success) since the 1984 European election in gaining visible support and electoral success with 10% to 15% of the vote (84). The Mouvement pour la France (MPF) and its leader Philippe de Villiers also receive attention in the report. And the resurgence of skinheads and direct action neo-fascists like the "violence-prone street brawlers of the Groupe Union Defense" are discussed (89-90).

The essay develops a handful of strategies for combatting right-wing movements:
The Heinrich Boll Stiftung report authored by sixteen representatives from EU countries, "How to Counter Right Wing Populism and Extremism in Europe", summarizes current progressive thinking about how best to resist the rise of right-wing extremism (link). This document was the result of a conference held in Brussels and Antwerp in October 2015. Here are some key findings and recommendations:
Another FES study addresses the "massive challenges" faced by the EU in the context of citizens' expectations (link). Richard Himler's public opinion survey (2016) considers eight countries (Netherlands, Sweden, France, Germany, Slovak Republic, Spain, Italy, and the Czech Republic).

Here is a summary table based on results from all eight countries ranking the relative weight of EU priorities for EU citizens. Solving the refugee crisis dwarfs concern about other issues, though unemployment comes in as a substantial second.

Given Brexit, it is interesting to see the relative levels of dissatisfaction with EU membership in other countries as well. An average of 34% of respondents found that "disadvantages exceed advantages" in EU membership for their country, with the Czech Republic at 44% on this question and Spain at only 22%. 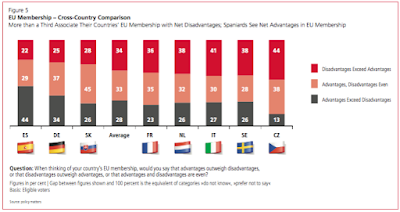 These are interesting survey results describing the growth of right-wing extremism in Europe. But these studies are limited in their explanatory reach. They are largely descriptive; they give a basis for assessing the dimensions of the problem in terms of population attitudes and right-wing extremist organizations. But there is little by the way of sociological analysis of the mechanisms through which these extremist attitudes and processes of activism proliferate and grow. In an upcoming post I will review some recent work on the ethnography of right-wing movements that will allow a somewhat deeper understanding of the dynamics of these movements.

I won't be approved by the blogger ... because everything they "investigated" is self preservation among people under siege.

Poland and Hungary are absolutely correct in their assessment of DEEP STATE takeover of their countries, the EU, and the USA.

The idea that this is dangerous, right wing activity is globalspeak for TAKE YOUR MEDICINE>> OR WE WILL DESTROY YOU>

Someone needs to look into the Saudi Money that will probably save Merkel and Deutschbank.

That's what this is really about.... Islamic takeover.. and the purchase of corrupt multi national banks, corporations and governments.

Our governments and the author's of this "study" are advancing multi culturalism to destroy Poland Hungary... Europe and America.... one immigrant at a time.