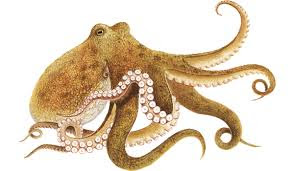 When I first posted on cephalopod intelligence a year or so ago, I assumed it would be a one-off diversion into the deep blue sea (link). But now I've read the fascinating recent book by Peter Godfrey-Smith, Other Minds: The Octopus, the Sea, and the Deep Origins of Consciousness, and it is interesting enough to justify a second deep dive. Godfrey-Smith is a philosopher, but he is also a scuba diver, and his interest in cephalopods derives from his experiences under water. This original stimulus has led to two very different lines of inquiry. What is the nature of the mental capacities of an octopus? And how did "intelligence" happen to evolve twice on earth through such different pathways? Why is a complex nervous system an evolutionary advantage for a descendent of a clam?

The evolutionary question is also of interest to philosophers. The discipline of the philosophy of biology focuses much of its attention on the issues raised by evolutionary theory. Elliott Sober's work illustrates this form of philosophical thinking -- for example, The Nature of Selection: Evolutionary Theory in Philosophical Focus, Evidence and Evolution: The Logic Behind the Science. Godfrey-Smith tells an expert's story of the long evolution of mollusks, in and out of their shells, with emerging functions and organs well suited to the opportunities available in their oceanic environments. One of the evolutionary puzzles to be considered is the short lifespan of octopuses and squid -- just a few years (160). Why would the organism invest so heavily in a cognitive system that supported its life for such a short time?

A major part of the explanation that G-S favors involves the fact that octopuses are hunters, and a complex nervous system is more of an advantage for predator than prey. (Wolves are more intelligent than elk, after all!) Having a nervous system that supports anticipation, planning, and problem solving turns out to be an excellent preparation for being a predator. Here is a good example of how that cognitive advantage plays out for the octopus:


David Scheel, who works mostly with the giant Pacific octopus, feeds his animals whole clams, but as his local animals in Prince William Sound do not routinely eat clams, he has to teach them about the new food source. So he partly smashes a clam and gives it to the octopus. Later, when he gives the octopus an intact clam, the octopus knows that it’s food, but does not know how to get at the meat. The octopus will try all sorts of methods, drilling the shell and chipping the edges with its beak, manipulating it in every way possible … and then eventually it learns that its sheer strength is sufficient: if it tries hard enough, it can simply pull the shell apart. (70)

Exploration, curiosity, experimentation, and play are crucial components of the kind of flexibility that organisms with big nervous systems bring to earning their living.

G-S brings up a genuinely novel aspect of the organismic value of a complex nervous system: not just problem-solving applied to the external environment, but coordination of the body itself. Intelligence evolves to handle the problem of coordinating the motions of the parts of the body.


The cephalopod body, and especially the octopus body, is a unique object with respect to these demands. When part of the molluscan “foot” differentiated into a mass of tentacles, with no joints or shell, the result was a very unwieldy organ to control. The result was also an enormously useful thing, if it could be controlled. The octopus’s loss of almost all hard parts compounded both the challenge and the opportunities. A vast range of movements became possible, but they had to be organized, had to be made coherent. Octopuses have not dealt with this challenge by imposing centralized governance on the body; rather, they have fashioned a mixture of local and central control. One might say the octopus has turned each arm into an intermediate-scale actor. But it also imposes order, top-down, on the huge and complex system that is the octopus body. (71)

In this picture, neurons first multiply because of the demands of the body, and then sometime later, an octopus wakes up with a brain that can do more. (72)

This is a genuinely novel and intriguing idea about the creation of a new organism over geological time. It is as if a plastic self-replicating and self-modifying artifact bootstrapped itself from primitive capabilities into a directed and cunning predator. Or perhaps it is a preview of the transition that artificial intelligence systems embodying adaptable learning processes and expanding linkages to the control systems of the physical world may take in the next fifty years.
What about the evolutionary part of the story? Here is a short passage where Godfrey-Smith considers the long evolutionary period that created both vertebrates and mollusks:


The history of large brains has, very roughly, the shape of a letter Y. At the branching center of the Y is the last common ancestor of vertebrates and mollusks. From here, many paths run forward, but I single out two of them, one leading to us and one to cephalopods. What features were present at that early stage, available to be carried forward down both paths? The ancestor at the center of the Y certainly had neurons. It was probably a worm-like creature with a simple nervous system, though. It may have had simple eyes. Its neurons may have been partly bunched together at its front, but there wouldn’t have been much of a brain there. From that stage the evolution of nervous systems proceeds independently in many lines, including two that led to large brains of different design. (65)

The primary difference that G-S highlights here is the nature of the neural architecture that each line eventually favors: a central cord connecting periphery to a central brain; and a decentralized network of neurons distributed over the whole body.


Further, much of a cephalopod’s nervous system is not found within the brain at all, but spread throughout the body. In an octopus, the majority of neurons are in the arms themselves— nearly twice as many as in the central brain. The arms have their own sensors and controllers. They have not only the sense of touch, but also the capacity to sense chemicals— to smell, or taste. Each sucker on an octopus’s arm may have 10,000 neurons to handle taste and touch. Even an arm that has been surgically removed can perform various basic motions, like reaching and grasping. (67)

So what about the "alien intelligence" part of G-S's story? G-S emphasizes the fact that octopus mentality is about as alien to human experience and evolution as it could be.


Cephalopods are an island of mental complexity in the sea of invertebrate animals. Because our most recent common ancestor was so simple and lies so far back, cephalopods are an independent experiment in the evolution of large brains and complex behavior. If we can make contact with cephalopods as sentient beings, it is not because of a shared history, not because of kinship, but because evolution built minds twice over. This is probably the closest we will come to meeting an intelligent alien. (9)

This too is intriguing. G-S is right: the evolutionary story he works through here gives great encouragement for the idea that an organism in a complex environment and a few bits of neuronal material can evolve in wildly different pathways, leading to cognitive capabilities and features of awareness that are dramatically different from human intelligence. Life is plastic and evolutionary time is long. The ideas of the unity of consciousness and the unified self don't have any particular primacy or uniqueness. For example:

The octopus may be in a sort of hybrid situation. For an octopus, its arms are partly self—they can be directed and used to manipulate things. But from the central brain’s perspective, they are partly non-self too, partly agents of their own. (103)

So there is nothing inherently unique about human intelligence, and no good reason to assume that all intelligent creatures would find a basis for mutual understanding and communication. Sorry, Captain Kirk, the universe is stranger than you ever imagined!

I looked at this post because of its relevance to an interesting film I saw recently, called "Arrival", which features octopus- like alien creatures, called "Heptapods" because of their seven tentacles. And it focuses on the problem of communicating with such creatures in the absence of a common language of translation (a kind of problem which field linguists have developed methods of dealing with). If you haven't seen it I would highly recommend it; I think you would find it interesting.

I would like to make a more substantive comment later (I have to go now), but something you said (or G-S said) early on caught me up: "... a complex nervous system is more of an advantage for predator than prey. (Wolves are more intelligent than elk, after all!)" I don't see how this claim is necessarily the case; faced with a bear, for example, a human would be prey, but a human would probably fare better than some other animal (if foot speed is not a factor). It seems that adaptive intelligence would be just as advantageous on the other end of the hunter- prey relation. The logic of problem- solving would seem like a more promising path to explore.

Then also, G-S does say, "... it also imposes order, top- down, on the huge and complex system that is the octopus body." The presence of the unification structure is important, I think, for the possibility of the individual organism having a "world- view". But the octopus seems to have a "federal" system, to use a governance metaphor.