Survey research on the extreme right in Europe 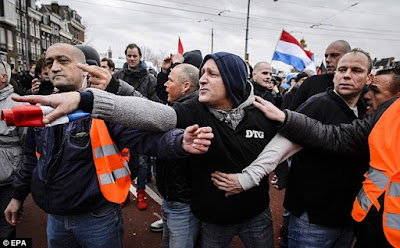 Earlier posts have addressed the issue of the rise of extreme-right parties and ideologies in many parts of the world, including Western Europe and the United States. A valuable multi-country research project now seeks to shed light on these phenomena based on large-scale surveys of attitudes among young people. MYPLACE (Memory, Youth, Public Legacy and Civic Engagement) is a multi-country data set in order to assess the distribution and variation of extreme right ideologies across countries and social groups (link). This research project provides substantial survey data about the civic and political attitudes of young people in numerous European countries. Here is a brief description of the research project on the MYPLACE website:

MYPLACE can provide a hugely rich and sophisticated dataset, covering young people’s attitudes and beliefs in relation, specifically, to far-right and populist ideologies, but in practice covering issues such as class, xenophobia, racism, education and trust in democratic processes and associated social and political exclusion.

A recent article in Sociological Review seeks to extend this research. Inta Mieriņa and Ilze Koroļeva's "Support for far right ideology and anti-migrant attitudes among youth in Europe: A comparative analysis" (link) makes use of the MYPLACE datasets to evaluate different theories of the factors that encourage right wing extremism among European young people. This piece provides valuable reading for anyone concerned about the rise of authoritarian and racist politics in many parts of the democratic world. Here is the abstract of the article:


The last decade has seen a notable increase in support for far right parties and an alarming rise of right-wing extremism across Europe. Drawing on a new comparative youth survey in 14 European countries, this article provides deeper insight into young people’s support for nationalist and far right ideology: negative attitudes towards minorities, xenophobia, welfare chauvinism and exclusionism in relation to migrants. We first map the support for far right ideology among youth in Europe, and then use multilevel regression analysis (16,935 individuals nested in 30 locations) to investigate which individual or contextual factors are associated with a higher propensity among young people towards getting involved in far right movements. (183)

Mieriņa and Koroļeva consider several fundamental theories of the rise of far right activism: social psychological theories of the effects of ethnic diversity on an individual's conception of his or her own identity; the effects of modernization and urbanization on political attitudes; socio-structural explanations ("level of immigration, economic conditions and level of support for the political system"; 187); and the impact of media on political attitudes.

Here is a plot of a particularly important pair of variables observed in the study, ethnic nationalism and negative attitude towards minorities: 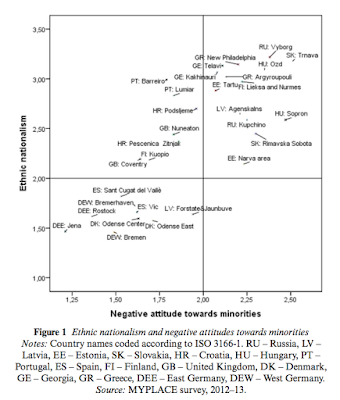 Mieriņa and Koroļeva summarize their key findings in these terms:


Using new data collected as part of the MYPLACE youth survey, in this article we have explored young people’s support for far right ideology and analysed which factors are associated with holding far right views. We find that despite comparatively low immigration rates, young people in post-socialist locations, along with Greek locations, tend to have more negative predispositions and to be more xenophobic and exclusionist towards immigrants than young people in Western European locations. Moreover, we have demonstrated that young Europeans’ views on immigrants vary greatly even within the boundaries of one country, thus below-national level analysis should be the preferred strategy in future studies.

Our analysis shows that negative attitudes towards minorities and immigrants are often rooted in ethnic nationalism, that is, a belief that one has to be born in a country or have at least one ethnic parent for being a citizen of a country. A more over-arching civic national identity – based on respect for countries’ institutions and laws – is more likely to create an inclusive, cohesive society.

The data strongly support the instrumental model of group conflict, confirming that resource stress over money, status and, most of all, jobs is an essential source of group conflicts. Living in poverty or seeing poverty facilitates negative attitudes towards minorities and significantly increases xenophobia, welfare chauvinism and exclusionism, especially if immigration rates are high. Far right ideology is especially appealing to groups of society who experience a higher level of insecurity and perceived competition. (199)

The article reports some very important empirical findings on the subject of the prevalence and variation of support for far-right ideologies across Western Europe. But equally interesting are the efforts the authors make to clarify the central terms involved, including especially the idea of a "far right ideology." They refer to work by Cas Mudde on this topic:


Cas Mudde's research suggests that radical right ideology typically rests on nationalism, xenophobia, welfare chauvinism, and law and order.... The ideological core of the new 'populist radical right' ideology ... is a combination of nativism, authoritarianism and populism, of which nativism is considered as the key feature. It holds that 'states should be inhabited exclusively by members of the native group ('the nation') and that non-native elements (persons and ideas) are fundamentally threatening to the homogeneous nation-state. (185)

This is an astute, clear, and focused analysis of the heart of far-right ideologies in many countries. And people who have lived through the Trump presidential campaign and the extreme rhetoric the candidate used consistently throughout the preceding year will recognize the point-for-point correspondence that exists between Trumpism and this definition of radical right nativist ideology.

Here are a few useful references from Mieriņa and Koroļeva's bibliography:

So which parties come under the “far right” umbrella? Presumably the jingistic Labour and Tory parties which took part in the slaughter of a million Muslims in Iraq for no very good reason are included. By contrast the British Nationa Party and UKIP can’t possibly be included, as they opposed the war from day one.

Another “far right” outfit I assume is Islam: that lot are about ten miles to the right of the BNP and UKIP. I mean they go in for female genital mutilation, killing cartoonists and authors, homophobia, holocaust denial and opposing Darwin’s theory of evolution. I could go on.

Unfortunately it isn't terribly progressive to look too closely at the support for/prevalence of degenerate practices or ideologies amongst groups that we have labeled victims i.e. FGM, multigenerational inbreeding, virulent anti-Semitism, misogyny, support for brutal medievalist theocratic political views. There is far more comfort to be had in lazy moral relativism, European far right groups are a disgusting and ill conceived cultural subgroup, they let the rest of us down because they should know better , it's obviously wrong to hold non-European origin cultural subgroups to the same moral standards, because they obviously don't know any better!