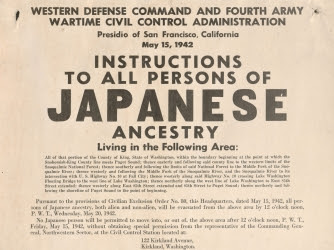 What kind of political movement does Donald Trump represent? How did we get here? And what will be needed to defeat this divisive and anti-democratic political agenda?

There is a tendency to see Trump as a bolt out of the blue, an anomaly -- an extraordinary showman who somehow conned just enough voters to gain him the Republican nomination and then to prevail as a minority vote getter with an electoral college majority. But now that we've had a few months to reflect on the election, it seems a little more clear that Trump represents something different and even more worrisome. His presidency is more like an American version of a global phenomenon -- a populist ultra-rightist who has come to power on the strength of a political program of xenophobia, hatred of immigrants, and racism.

The extreme right has made sizable gains in Europe in the past forty years. Pippa Norris provides a summary statistic on the rise of the radical right in Western Europe: 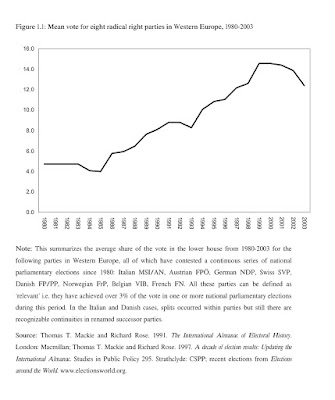 source: Pippa Norris, The Rise of the Radical Right: Parties and electoral competition in postindustrial societies

The parallels between Trump's most outlandish political messages as an unorthodox campaigner and the political ideology of the European extreme right parties are exact and uncanny. Take first his right-wing populism. Cas Mudde attempted to distill the "populist zeitgeist" of the European extreme right in a 2004 article (link), based on his long study of the extreme right parties of Europe. The match with the Trump campaign is exact. Populism is anti-elitist, and its leaders marshal resentment against "corrupt elites". Mudde writes:


I define populism as an ideology that considers society to be ultimately separated into two homogeneous and antagonistic groups, ‘the pure people’ versus ‘the corrupt elite’, and which argues that politics should be an expression of the volonté générale (general will) of the people. Populism, so defined, has two opposites: elitism and pluralism. (543)

Moreover, populism is fundamentally divisive between "us" and "them":


Opponents are not just people with different priorities and values, they are evil! Consequently, compromise is impossible, as it ‘corrupts’ the purity. (544)

The visceral antagonism whipped up against the Clintons during the Trump campaign illustrate this theme.


The concept of the heartland helps to emphasize that the people in the populist propaganda are neither real nor all-inclusive, but are in fact a mythical and constructed sub-set of the whole population. In other words, the people of the populists are an ‘imagined community’, much like the nation of the nationalists. (546)

Further, as Mudde documents for European far-right parties, populist politicians are frequently antagonistic to the media -- with the right-wing populist view that the media serves the interests of the elites, not the heartland. This line of thought has an extensive research literature as well -- for example, Mazzoleni et al, The Media and Neo-Populism: A Contemporary Comparative Analysis. "In the populist mind, the elite are the henchmen of 'special interests'" (561) -- a line of heartland thinking that plays into dark conspiratorial theories and anti-Semitism. (Recall the closing political ad sponsored by the Trump campaign with its strong implications of anti-Semitic innuendo; link.)

Piero Ignazi offered a detailed analysis of extreme right parties based on their core ideologies in 1995 (link). He refers to the summary offered by H.G. Betz:


Betz (1993) has introduced the category of “populist extreme right” on the basis of four elements: a) radical opposition to the cultural and socio-political system, without an overt attack to the system as such; b) the refusal of individual and social equality; c) the defence of the “common man”; d) the emphasis on “common sense”; all these populist parties share racist, authoritarian, anti-women and law and order attitudes. (3)

These are parties "which appeal to resentments, prejudices and traditional values and offer simplistic and unrealistic solutions to the socio-political problems" (4).

And, as Ignazi observes for European extreme right politicians, much of their rhetoric is directed against traditional political parties themselves (recalling Trump's own war with the GOP establishment during the campaign).


Dissatisfaction towards institutions, parties, the way in which democracy works, the traditional channels of participation and the output of the system in relation to identity and security tend inevitably to feed opposition and/or anti-system parties and, in particular, the extreme right. In fact, only ERPs indicate, while quite vaguely, a new way of channelling of the demands based on populist style. Only ERPs distrust parties as such (even if they build up strong organizations for their own) because they divide the “people” and they pervert the “general will”. Only ERPs offer the electorate a right wing radical alternative to the establishment’s political discourse. (8)

Here again it is impossible to miss the strong parallels that exist between these currents and the rhetoric of the Trump machine.

And, of course, there is racism, xenophobia, and bigotry. Thomas Greven emphasizes the central role played in right-wing populism in Europe in his Friedrich Ebert Stiftung study (link). (Here is a summary of research on the racism underlying the European right; link.) The rise of the extreme right parties in Europe has been driven by nationalism and antagonism to minority groups and immigrants; and the rhetoric of these parties has in turn increased the volume and intensity of popular racism. Racism is normalized.


Group-focused enmity is widespread in Europe. It is weakest in the Netherlands, and strongest in Poland and Hungary. With respect to anti-immigrant attitudes, anti-Muslim attitudes and racism there are only minor differences between the countries, while differences in the extent of anti-Semitism, sexism and homophobia are much more marked. (Intolerance, Prejudice and Discrimination: A European Report; link)

These themes are all too evident in the Trump political agenda, most recently with this week's stunning restrictions on Muslim visitors and refugees and the deliberate choice not to refer to Jewish victims in the annual White House statement commemorating the Holocaust (link).

So we might say that Trumpism is a familiar kind of political movement after all. It is right-wing populism, mobilizing its constituents around racism and bigotry combined with resentment of immigrants, with a pounding message of antagonism towards the institutions and personages of the status quo, including especially the media and government. The white nationalism of Steve Bannon and his intimate role within the Trump administration makes perfect sense.

Good as far as it goes but you need to elaborate about how this sort of politics promises benefits to the working class that it has no intention or ability to deliver. Workers are fooled into thinking they will get something out of all of this beyond satisfaction about their prejudices.

Your piece is Long on relating populism <=> Trumpism. Woefully short on "how we got here".

Too bad... I was looking to a philosopher of social science to sort out the independent variables that created the conditions that appear to me to have been developed over time. In my perspective and as best I can determine it began under Reagan who was the first to capture whatever was going on. I looking back before Reagan it seems that the event which might have triggered the U.S.'s movement toward increasing populism was the implementation of the civil rights act in '64. That act promoted right wing populism in the former confederate states to increase and extended into the rural mid-western states it appears -- which are traditionally conservative enclaves (rural values, "individualism", close-knit small (more isolated), far less racially and culturally diverse communities).

So from a layman's study of the independent events or conditions that lead to Trumpism today I would have to say it begins with the post-civil war southern Jim Crow ascendency which was never countered nationally by national laws to prevent them or national outrage --- racism thus existed on a national scale if not practiced as openly and obviously as in the former confederate states.

If we ask why this was the case, and we're realistic about it, then it must be said that it appears to go right back to the compromises made to form a "cohesive nation"... e.g. the constitutional convention which allowed a nation to form under major compromises born of vagaries that have never actually sorted out or ever resolved, and indeed allowed to persist for 100 years after the Civil War.

1. This phenomenon is shared among Western countries.
2. It is characterized by antagonism to elites.
3. There is a great diversity of political history in these countries.
4. The most obvious concentration of elites in every country is its universities.
5. Unlike politics, intellectual fads show an amazing homogeneity across counties.

A much-needed analysis and reflections to understand better these challenging times. Many thanks!Greetings from Colombia.

Not mentioned is the fact that post-WWII Nazis settled in the U.S. quietly with the permission of the State Dept. I grew up in Northern Illinois and they were in all professions, including teachers, who openly harassed me for being of Polish ancestry. http://www.chicagomag.com/city-life/November-2016/Chicago-Nazi-Party-1978-Skokie-March/

I'm curious whether you think it's possible that Trump's appeal had more to do with a rejection of a mutually reinforcing neoliberal and neoconservative trade and foreign policy that gutted the American working and middle class, rather than an embrace of racism, xenophobia and misogyny?

Specifically, per your excellent post on Moral economy as a historical social concept is it possible to view Trumpism as a kind of peasant revolution in which "peasant communities are aroused to protest and rebellion when the terms of the local subsistence ethic are breached by local elites, state authorities, or market forces"?

Does sociology offer any suggestions on how to combat this? As the beliefs of the right-wing populists are not rational, rational discussion will probably be unavailing. Besides, when conservatives are confronted with information showing that their beliefs are wrong, they often double-down - believing their false beliefs even more strongly. Would discussing shared positive values work?