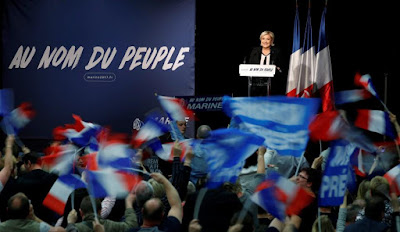 It is apparent, on this first round of the presidential elections in France, that we urgently need to understand better the dynamics and causes of radical populism in democratic polities. What is populism? Why does it have such virulence in the current moment as a political movement? What roles do racism, xenophobia, resentment, and economic fear play in the readiness of ordinary citizens in Europe and America to support radical populist candidates and platforms?

The topic has been the subject of research by very talented investigators over the past twenty years. Several recent books are especially relevant in the current moment. Particularly relevant are Cas Mudde and Cristobal Rovira Kaltwasser's Populism: A Very Short Introduction; Jan-Werner Muller's What Is Populism?; and a recent collection by Social Europe edited by Henning Meyer, Understanding the Populist Revolt. Taken together, the three sources provide an excellent basis for thinking further about the nature of radical populism.

Mudde and Kaltwasser argue that populism differs from other political umbrella terms (socialism, fascism) in one important respect: it is less specific in identifying a well defined ideological program. It is, in their words, "an essentially contested concept". Here are a few of their central ideas:


A more recent approach considers populism, first and foremost, as a political strategy employed by a specific type of leader who seeks to govern based on direct and unmediated support from their followers. It is particularly popular among students of Latin American and non-Western societies. The approach emphasizes that populism implies the emergence of a strong and charismatic figure, who concentrates power and maintains a direct connection with the masses. (kl 677-680)

Beyond the lack of scholarly agreement on the defining attributes of populism, agreement is general that all forms of populism include some kind of appeal to “the people” and a denunciation of “the elite.” Accordingly, it is not overly contentious to state that populism always involves a critique of the establishment and an adulation of the common people. More concretely, we define populism as a thin-centered ideology that considers society to be ultimately separated into two homogeneous and antagonistic camps, “the pure people” versus “the corrupt elite,” and which argues that politics should be an expression of the volonté générale (general will) of the people. (kl 700-705)

This means that populism can take very different shapes, which are contingent on the ways in which the core concepts of populism appear to be related to other concepts, forming interpretative frames that might be more or less appealing to different societies. Seen in this light, populism must be understood as a kind of mental map through which individuals analyze and comprehend political reality. It is not so much a coherent ideological tradition as a set of ideas that, in the real world, appears in combination with quite different, and sometimes contradictory, ideologies. (kl 713-717)

A common thread of populist rhetoric is that the movement is "anti-elitist" and that it speaks on behalf of "the people". Elites, according to populist leaders, have dominated policy and captured the benefits of society; "the people" have been left behind by elites who care nothing for their wellbeing. These tropes make perfect interpretive sense of Trumpism -- the campaign's attack on the media, scientists, politicians, and universities, its virulent personal attacks against Hillary Clinton, and its efforts to divide "the real Americans" from others -- immigrants, Mexicans, Muslims, Jews, and urban dwellers. And this is the most important point: by claiming to speak uniquely for "the people", there is an implicit openness to authoritarianism in populist politics.

So what is "not-Populism"? What is a political ideology and movement that falls outside the populist rubric? They identify pluralism as the main rival:


Pluralism is the direct opposite of the dualist perspective of both populism and elitism, instead holding that society is divided into a broad variety of partly overlapping social groups with different ideas and interests. Within pluralism diversity is seen as a strength rather than a weakness. Pluralists believe that a society should have many centers of power and that politics, through compromise and consensus, should reflect the interests and values of as many different groups as possible. Thus, the main idea is that power is supposed to be distributed throughout society in order to avoid specific groups— be they men; ethnic communities; economic, intellectual, military or political cadres, etc.— acquiring the capacity to impose their will upon the others. (kl 733-738)

Mudde and Kaltwasser pay close attention to what seems like the most important current problem: mobilization around populist political agendas.


By mobilization we mean the engagement of a wide range of individuals to raise awareness of a particular problem, leading them to act collectively to support their cause. Overall, three types of populist mobilization can be identified: personalist leadership, social movement, and political party. (kl 1246-1248)

They highlight three kinds of mechanisms of mobilization: social movements, charismatic leaders, and local grassroots organizations. (See an earlier post on work by McAdam and Kloos on racialized social movements in the United States; link.)

What factors lead to success in populist mobilization?


For any political actor to be successful, there has to be a demand for her message. Most populist actors combine populism with one or more so-called host ideologies, such as some form of nationalism or socialism. Although populism is often noted as a reason for their success, many electoral studies instead focus exclusively on the accompanying features, such as xenophobia in western Europe or socioeconomic support for disadvantaged groups in Latin America. This is in part a consequence of the lack of available data at the mass level. Empirical studies of populist attitudes are still in their infancy, but they do show that populist attitudes are quite widespread among populations in countries with relevant populist parties (e.g., Netherlands) and social movements (e.g., the United States) as well as in countries with no relevant populist actors (e.g., Chile). (Kindle Locations 2063-2069)

This passage highlights some of the kinds of messages that populists have deployed to support mobilization -- xenophobia and its cousins, and "nation first!" appeals for economic improvement for "the people". Mudde and Kaltwasser highlight the use of mistrust as a political theme -- "elites" are abusing "the people's" interests and needs, the elites cannot be trusted.  Appeals by populist leaders to fear, mistrust, and resentment of others have proven widespread and durable in numerous countries, including the recent presidential campaign in the United States.

A crucially important question before us is why racist and xenophobic attitudes appear to be becoming more common and more readily mobilized, in Europe and in the United States. Why is the rhetoric of division and hate so powerful in today's politics? Mudde and Kaltwasser do not shed much light on this question; indeed, they barely confront the topic. The terms "hate" and "race" do not appear in the book at all. They address the topic of xenophobia more generally (largely in the context of immigration issues). But they do not consider the more basic question: why is hate such a powerful political theme in the politics of extremist populism?

The other two books mentioned above provide more insight into this question, and I will return to them in a subsequent post.

There is today a little bit of good news for everyone concerned about the ascendancy of extremist populist politics in modern democracies. It appears that political novice and moderate candidate Emmanuel Macron has slightly bested far-right populist Marine Le Pen in today's French election results (23.7% vs. 21.8%, with 96% of polls reported). So the final round will involve a run-off election between the two leading candidates, and almost all commentators agree that the advantage in the second round will go to Macron. So the anxiety felt by many around the world that France would follow Great Britain (Brexit) and the United States (Trump) with an unexpected victory for the extreme right populist position is now much abated.

Today's Populism is causus sui- which means it's ingredients are taken from the immediate present- the ideology is improvised and ad libbed- either it will fizzle or build new traditions. Everything old is dead.

Might be able to expand upon these inklings later.
Thanks for your post- we all feel your urgency

Hi Daniel, thanks for your thoughtful summary. One feature of the elections in the States i noticed was that yes, fear of the 'other' featured strongly in both the populist rhetoric and the conversations i had with friends and family from several parts of the country, a perhaps, unrealised driver might be the demographic shifts towards the traditional minority voter becoming the voting majority. A fundamental shift away from the white Anglo/euro majority is occurring there and the recent vote may be a nostalgic longing and last gasp for a passing white supremacy.