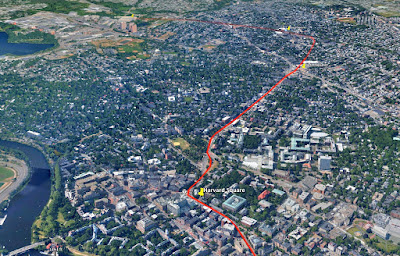 I view transport as a crucial structuring condition in society that is perhaps under-appreciated and under-studied. The extension of the Red Line from Harvard Square (its terminus when I was a graduate student) to Davis Square in Somerville a decade later illustrated the transformative power of a change in the availability of urban transportation; residential patterns, the creation of new businesses, and the transformation of the housing market all shifted rapidly once it was possible to get from Davis Square to downtown Boston for a few dollars and 30 minutes. The creation of networks of super-high-speed trains in Europe and Asia does the same for the context of continental-scale economic and cultural impacts. And the advent of container shipping in the 1950's permitted a substantial surge in the globalization of the economy by reducing the cost of delivery of products from producer to consumer. Containers were a disruptive technology. It is clear that transportation systems are a crucial part of the economic, political, and cultural history of a place larger than a village; and this is true at a full range of scales.

We can look at the history of transport from several perspectives. First, we can focus on the social imperatives (including cultural values) that have influence on the development and elaboration of a transportation system. (Frank Dobbin considers some of these factors in his Forging Industrial Policy: The United States, Britain, and France in the Railway Age, where he considers the substantial impact that differences in political culture had on the build-out of rail networks in France, Germany, and the United States; link.) Second, we can focus on the social and political consequences that flow from the development of a new transportation system. For example, ideas and diseases spread further and faster; new population centers arise; businesses develop closer relationships with each other over greater distances. And third, we can consider the historiography of the history of transport -- the underlying assumptions that have been made by various historians who have treated transport as an important historical phenomenon.

Over fifty years ago L. Girard treated these kinds of historical effects in his contribution to Cambridge Economic History of Europe: Volume VI (Parts I and II), Part I, in a chapter dedicated to "Transport". He provides attention to the main modalities of transport -- roads, sea, rail. In each case the technology and infrastructure are developed in ways that illustrate significant contingency. Consider his treatment of the development of the English road network.


Eventually the English network, the spontaneous product of local decisions, progressed out of this state of disorganization. Its isolated segments were linked up and ultimately provided a remarkably comprehensive network corresponding to basic national requirements. By trial and error and by comparing their processes, the trustees and their surveyors arrived at a general notion of what a road should be. (217)

(Notice the parallels that exist between this description and the process through which the Internet was built out in the 1980s and 1990s.)

Similar comments are offered about the American rail system.


The American railroad was the product of improvisation, in contrast to the English track, which was built with great care. At first all that was required was a fairly rough and ready line which could operate with a minimum amount of equipment. Then as traffic increased and profits began to be made, the whole enterprise was transformed to take account of the requirements of increased traffic and of the greater financial possibilities. (232)

Despite all their improvisations and wastage, the American railroads astonished Europe, which saw a whole continent come to life in the path of the lines. The railways opened up America for a second time. By 1850 the east-west link between western Europe and the Mississippi valley was already created by means of the States on the Atlantic seaboard. The supremacy of the Chicago-New York axis had become established, at the expense of the South and of Canada, which were taking more time to get organized. America swung away from a north-south to an east-west orientation. (233)

And here is a somewhat astounding claim:


The northern railways allowed the Union to triumph in the Civil War, which was fought in part to determine the general direction to be taken by the future railways. (233-234)

Also surprising is the role that Girard attributes to the politics of railroads in the ascendancy of Napoleon III in 1851 (239).

Here is Girard's summary of the large contours of the development of transport during this critical period:


Whatever the course of future history, the century of the railway and the steamer marks a decisive period in the history of transport, and that of the world. Particular events in political history often tend to assume less and less importance as time goes on. But the prophecies of Saint-Simon on the unification of the planet, and the meeting of the races for better or for worse, remain excitingly topical. Man has changed the world, and the world has changed man -- in a very short time indeed. (273)

This history was written in 1965, over fifty years ago. One thing that strikes the contemporary reader is how disinterested the author appears to be in cause and effect. He does not devote much effort to the question, what forces drove the discoveries and investments that resulted in a world-wide network of railways and steamships? And he does not consider in any substantial detail the effects of this massive transformation of activities at a national and global scale. Further, Gerard gives no indication of interest in the social context or setting of transport -- how transport interacted with ordinary people, how it altered the environment of everyday life, how it contributed to social problems and social solutions. It seems reasonable to believe that the history of transport during this period would be written very differently today.

(Prior posts have given attention to transport as a causal factor in history; link.)

I'm not surprised about Napoleon III. I was always told the Franco-Prussian War was basically a railroad dispatch contest.