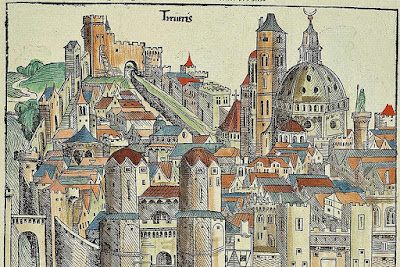 Cities provide a good illustration of the ontology of the theory of assemblage (link). Many forms of association, production, logistics, governance, and population processes came together from independent origins and with different causal properties. So one might imagine that unexpected dynamics of change are likely to be found in all urban settings.

The medieval period is not known for its propensity for innovation, out-of-the-box thinking, or dynamic tendencies towards change. One thinks rather of the placid, continuing social relations of the English countryside, the French village, or the Italian town. There is the idea that a stultifying social order made innovation and change difficult. However, studies of medieval cities over the past century have cast some doubt on this stereotype. Henri Pirenne's lectures on the medieval city in 1923 were collected in Medieval Cities: Their Origins and the Revival of Trade, and there are numerous clues indicating that Pirenne found ample features of dynamic change in the medieval city from the eleventh century forward. Here are a few examples:


The eleventh century, in fact, brings us face to face with a real commercial revival. This revival received its impetus from two centers of activity, one located in the south and the other in the north: Venice on one side and the Flemish coast on the other. (82)

Trade was thus forced upon them [Venice] by the very conditions under which they lived. And they had the energy and the genius to turn to profit the unlimited possibilities which trade offered them. (83)

Constantinople, even in the eleventh century, appears not only as a great city, but as the greatest city of the whole Mediterranean basin. Her population was not far from reaching the figure of a million inhabitants, and that population was singularly active. She was not content, as had been the population of Rome under the Republic and the Empire, to consume without producing. She gave herself over, with a zeal which the fiscal system shackled but did not choke, not only to trading but to industry. (84)

The geographical situation of Flanders, indeed, put her in a splendid position to become the western focus for the commerce of the seas of the north. It formed the natural terminus of the voyage for ships arriving from Northern England or which, having crossed the Sound after coming out of the Baltic, were on their way to the south. (97)

It was only in the twelfth century that, gradually but definitely, Western Europe was transformed. The economic development freed her from the traditional immobility to which a social organization, depending solely on the relations of man to the soil, had condemned her. Commerce and industry did not merely find a place alongside of agriculture; they reacted upon it.... The rigid confines of the demesnial system, which had up to now hemmed in all economic activity, were broken down and the whole social order was patterned along more flexible, more active and more varied lines. (101-102)

Large or small, [cities] were to be met everywhere; one was to be found, on the average, in every twenty-five square leagues of land. They had, in fact, become indispensable to society. They had introduced into it a division of labor which it could no longer do without. Between them and the country was established a reciprocal exchange of services. (102)

So trade, finance, manufacturing, and flexible labor led to a dynamic of change that resulted in real economic and urban development in medieval European cities. Pirenne emphatically does not give a rendering of the medieval city that features a rigid social order impeding social and economic change.

A recent study provides modern evidence that the stereotyped impression of social stasis in the urban world of the middle ages is incorrect (link). Rudolf Ceseretti and his co-authors of "Population-Area Relationship for Medieval European Cities" provide a strikingly novel view of the medieval city (link). Their key finding is that there is an unexpected similarity of behavior with modern urban centers that can be observed in the population and spatial characteristics of medieval cities. They have collected data on 173 medieval cities across Western Europe: 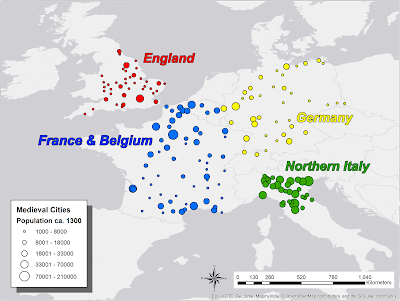 Here is how they frame their finding in the Introduction:


This research suggests that, at a fundamental level, cities consist of overlapping social and physical networks that are self-consistently bounded by settled physical space [55–57]. Here, we investigate whether the relationships between settlement population and settled land area predicted by scaling theory—and observed in contemporary cities—also characterized medieval European cities. In this paper, we analyze the relationship between the extent of built-up area and resident populations of 173 settlements located in present-day Belgium, France, England, Switzerland, Germany, and Italy, ca. AD 1300. Previous scholarship has produced population estimates for a large number medieval European cities [58,59]. We build on this work by linking population estimates with estimates for the built-up area compiled from historical and archaeological sources.

The authors focus on a common belief about medieval cities -- the idea that social interactions among residents are structured by powerful social institutions. Guilds, ethnicities, family groups, and religion provide examples of such institutions. If the net effect of social institutions like these is to reduce the likelihood of interaction of pairs of individuals, then medieval cities should display different patterns of spatial distribution of population and growth; if this effect is not significant, then medieval cities should resemble modern cities in these respects. This study finds the latter to be the case. Fundamentally they are interested in the topic of "scaling of settlement area with population size". Here is a plot of area and population for the cities they studied, separated by region: 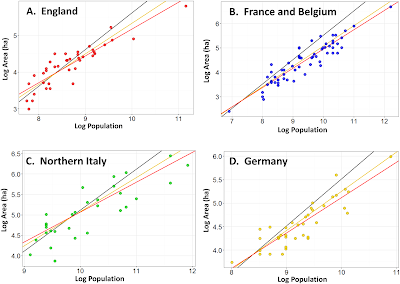 Their central finding is that the data about population density and spatial distribution do not support the hypothesis that medieval social institutions substantially inhibited social interactions to an extent that hindered urban growth and development. Rather, medieval cities look in their population and spatial structures to be very similar to modern cities.


Table 1 shows that the point estimates of the scaling coefficients for all four regional groups and for the pooled dataset fall within the 2/3 ≥ a ≥ 5/6 range predicted by the social reactor model... Thus, medieval cities across Western Europe exhibit, on average, economies of scale with respect to spatial agglomeration such that larger cities were denser on average. This pattern is similar to that observed for modern cities.

Even though medieval cities were structured by hierarchical institutions that are ostensibly not so dominant today, we interpret this finding as excluding a strongly segregating role for medieval social institutions. This would suggest that the institutions of Western European urban systems ca. 1300 did not substantially constrain social mixing, economic integration, or the free flow of people, ideas, and information. We take these findings as an indication that the underlying micro-level social dynamics of medieval cities were fundamentally similar to those of contemporary cities. (discussion)

This study presents a fascinating contemporary test of a thesis that would surely have interested Pirenne almost a century ago: did medieval cities develop spatially in ways that reflect a reasonable degree of freedom of choice among residents about where they lived and worked? And the data seem to confirm a "yes" for this question.

(I haven't attempted to summarize the methods used in this study, and the full article bears reading for anyone interested in the question of interpreting urban history from a quantitative point of view.)

Pretty! This was an extremely wonderful post. Thank you for
providing these details.