Worker-owned enterprises as a social solution 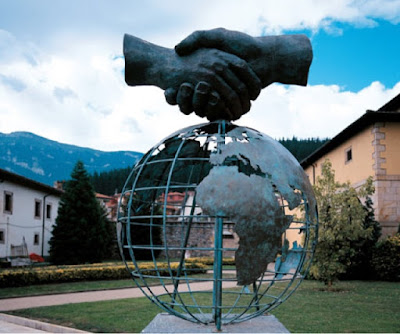 Consider some of the most intractable problems we face in contemporary society: rising inequalities between rich and poor, rapid degradation of the environment, loss of control of their lives by the majority of citizens. It might be observed that these problems are the result of a classic conundrum that Marx identified 150 years ago: the separation of society into owners of the means of production and owners of labor power that capitalism depends upon has a logic that leads to bad outcomes. Marx referred to these bad outcomes as "immiseration". The label isn't completely accurate because it implies that workers are materially worse off from decade to decade. But what it gets right is the fact of "relative immiseration" -- the fact that in almost all dimensions of quality of life the bottom 50% of the population in contemporary capitalism lags further and further from the quality of life enjoyed by the top 10%. And this kind of immiseration is getting worse.

A particularly urgent contemporary version of these problems is the increasing pace of automation of various fields, leading to dramatic reduction for the demand for labor. Intelligent machines replace human workers.

The central insight of Marx's diagnosis of capitalism is couched in terms of property and power. There is a logic to private ownership of the means of production that predictably leads to certain kinds of outcomes, dynamics that Marx outlined in Capital in fine detail: impersonalization of work relations, squeezing of wages and benefits, replacement of labor with machines, and -- Marx's ultimate accusation -- the creation of periodic crises. Marx anticipated crises of over-production and under-consumption; financial crises; and, if we layer in subsequent thinkers like Lenin, crises of war and imperialism.

At various times in the past century or two social reformers have looked to cooperatives and worker-owned enterprises as a solution for the problems of immiseration created by capitalism. Workers create value through their labor; they understand the technical processes of production; and it makes sense for them to share in the profits created through ownership of the enterprise. (A contemporary example is the Mondragon group of cooperatives in the Basque region of Spain.) The reasoning is that if workers own a share of the means of production, and if they organize the labor process through some kind of democratic organization, then we might predict that workers' lives would be better, there would be less inequality, and people would have more control over the major institutions affecting their lives -- including the workplace. Stephen Marglin's 1974 article "What do bosses do?" lays out the logic of private versus worker ownership of enterprises (link). Marglin's The Dismal Science: How Thinking Like an Economist Undermines Community explores the topic of worker ownership and management from the point of view of reinvigorating the bonds of community in contemporary society.

The logic is pretty clear. When an enterprise is owned by private individuals, their interest is in organizing the enterprise in such a way as to maximize private profits. This means choosing products that will find a large market at a favorable price, organizing the process efficiently, and reducing costs in inputs and labor. Further, the private owner has full authority to organize the labor process in ways that disempower workers. (Think Fordism versus the Volvo team-based production system.) This implies a downward pressure on wages and a preference for labor-saving technology, and it implies a more authoritarian workplace. So capitalist management implies stagnant wages, stagnant demand for labor, rising inequalities, and disagreeable conditions of work.

When workers own the enterprise the incentives work differently. Workers have an interest in efficiency because their incomes are determined by the overall efficiency of the enterprise. Further, they have a wealth of practical and technical knowledge about production that promises to enhance effectiveness of the production process. Workers will deploy their resources and knowledge intelligently to bring products to the market. And they will organize the labor process in such a way that conforms to the ideal of humanly satisfying work.

There are several ways in which cooperatives might fail as an instrument for progressive reform. First, it might be the case that cooperative management is inherently less efficient, effective, or innovative than capitalism management; so the returns to workers would potentially be lower in an inefficient cooperative than a highly efficient capitalist enterprise. Marglin's arguments in "What do bosses do?" give reasons to doubt this concern as a general feature of cooperatives; he argues that private management does not generally beat worker management at efficiency and innovation. Second, it might be that cooperatives are feasible at a small and medium scale of enterprise, but not feasible for large enterprises like a steel company or IBM. Greater size might magnify the difficulties of coordination and decision-making that are evident in even medium-size worker-owned enterprises. Third, it might be argued that cooperatives themselves are labor-expelling: cooperative members may have an economic incentive to refrain from adding workers to the process in order to keep their own income and wealth shares higher. It would only make economic sense to add a worker when the product of the next worker is greater than the average product; whereas a private owner will add workers at a lower wage when the new worker's product is greater than the marginal product. So an economy in which there is a high proportion of worker-owned cooperatives may produce a high rate of unemployment among non-cooperative members. Finally, worker-owned enterprises will need access to capital; but this means that an uncontrollable portion of the surplus will flow out of the enterprise to the financial sector -- itself a major cause of current rising inequalities. Profits will be jointly owned; but interest and finance costs will flow out of the enterprise to privately owned financial institutions.

And what about automation? Would worker-owned cooperatives invest in substantial labor-replacing automation? Here there are several different scenarios to consider. The key economic fact is that automation reduces per-unit cost. This implies that in a situation of fixed market demand, automation of an enterprise implies reduction of the wage or reduction of the size of the workforce. There appear to be only a few ways out of this box. If it is possible to expand the market for the product at a lower unit price, then it is possible for an equal number of workers to be employed at an equal or higher individual return. If it is not possible to expand the market sufficiently, then the enterprise must either lower the wage or reduce the workforce. Since the enterprise is democratically organized, neither choice is palatable, and per-worker returns will fall. On this scenario, either the work force shrinks or the per-worker return falls.

In short, the economic and institutional realities of worker-owned enterprises are not entirely clear. But the concept is promising enough, and there are enough successful real-world examples, to encourage progressive thinkers to reconsider this form of economic organization.

(Here are several earlier posts on issues of institutional design that confront worker-owned enterprises (link, link). Noam Chomsky and Richard Wolff discuss the value of worker-owned cooperatives within capitalism here; link, link. And here is an interesting article by Henry Hansmann on the economics of worker-owned firms in the Yale Law Journal; link.)

I wonder if Universities with real shared governance between faculty and administration would qualify as a type of worker led cooperative? I am sure there are many difference but it struck me as a possibility when reading this post

Hi, I used to work in a worker-owned enterprise - a law firm. Only partners owned the firm, but there was an expectation among legal staff of becoming partners one day. I have also worked in a company (a telco) and a public service agency. But it was really the law firm that I felt invested the most in my training. The training and experience I accumulated has facilitated opportunities outside law.

Hi, I used to work in a worker-owned enterprise - a law firm. Only partners owned the firm, but there was an expectation among legal staff of becoming partners one day. I have also worked in a company (a telco) and a public service agency. But it was really the law firm that I felt invested the most in my training. The training and experience I accumulated has facilitated opportunities outside law.

Unless the wealthy rise to the risible consumption of a North Korean dictator, there is a limit on the lifestyles of the rich and famous, but no reasonable limit to how high the low end can be raised.

Inequality, isn't a problem if the low end isn't poverty but respectable participation in society and the economy. After all the endgame of immiseration is a population that isn't a market anymore because it can't afford to buy anything.

About the rich, I don't care, but how to ensure respectable participation, CK Prahalad points to https://en.wikipedia.org/wiki/The_Fortune_at_the_Bottom_of_the_Pyramid but I suspect increasing production is going to exceed our ability to consume, again as Marx noted.

We expect to pay for things that are scarce, when production isn't, and consumption is, perhaps we will pay people to consume via transfers and a UBI. The poor of the future may be those predicted in the Midas Plague, https://tentoinfinity.com/2013/09/11/the-midas-plague-by-frederik-pohl/