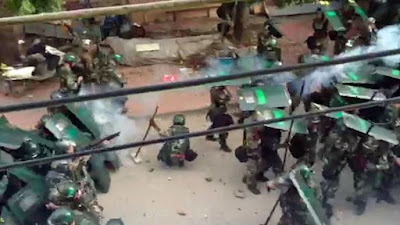 An earlier post commented on Tony Judt's magnificent book Postwar: A History of Europe Since 1945. There I focused on the story he tells of the brutality of the creation of Communist Party dictatorships across Eastern Europe (link). Equally fascinating is his narrative of the abrupt collapse of those states in 1989. In short order the world witnessed the collapse of communism in Poland (June 1989), East Germany (November 1989), Czechoslovakia (November 1989), Bulgaria (November 1989), Romania (December 1989), Hungary (March 1990), and the USSR (December 1991). Most of this narrative occurs in chapter 19.

The sudden collapse of multiple Communist states in a period of roughly a year requires explanation. These were not sham states; they had formidable forces of repression and control; and there were few avenues of public protest available to opponents of the regimes. So their collapse is worth of careful assessment.

There seem to be several crucial ingredients in the sudden collapse of these dictatorships. One is the persistence of an intellectual and practical opposition to Communism and single-party rule in almost all these countries. The brutality of violent repression in Poland, Hungary, Czechoslovakia, and other countries did not succeed in permanently suppressing opposition based on demands for greater freedom and greater self-determination through political participation. And this was true in the fields of the arts and literature as much as it was in the disciplines of law and politics. Individuals and organizations reemerged at various important junctures to advocate again for political and legal reforms, in Poland, Czechoslovakia, Hungary, and even the USSR.

Second was the chronic inability of these states to achieve economic success and rising standards of living for their populations. Price riots in Poland in the 1970s and elsewhere signaled a fundamental discontent by consumers and workers who were aware of the living conditions of people living in other parts of non-Communist Europe. Material discontent was a powerful factor in the repeated periods of organized protest that occurred in several of these states prior to 1989. (Remember the joke from Poland in the 1970s -- "If they pretend to pay us, we pretend to work.")

And third was the position taken by Mikhail Gorbachev on the use of force to maintain Communist regimes in satellite countries. The use of violence and armed force had sufficed to quell popular movements in Hungary, Czechoslovakia, and Poland in years past. But when Gorbachev made it credible and irreversible that the USSR would no longer use tanks to reinforce the satellite regimes -- for example, in his speech to the United Nations in December 1988 -- local parties were suddenly exposed to new realities. Domestic repression was still possible, but it was no longer obvious that it would succeed.

And the results were dramatic. In a period of months the world witnessed the sudden collapse of Communist rule in country after country; and in most instances the transitions were relatively free of large-scale violence. (The public executions of Romania's Nicolae and Elena Ceaușescu on Christmas Day, 1889 were a highly visible exception.)

There seem to be many historical lessons to learn from this short period of history. Particularly sharp are the implications for other single-party dictatorships. So let's reflect on the behavior of the single-party state in China since the mid-1980s. The Chinese party-state has had several consistent action plans since the 1980s. First, it has focused great effort on economic reform, rising incomes, and improving standards of living for the bulk of its population. In these efforts it has been largely successful -- in strong contrast to the USSR and its satellite states. Second, the Chinese government has intensified its ability to control ideology and debate, culminating in the current consolidation of power under President Xi. And third, it used brutal force against the one movement that emerged in 1989 with substantial and broad public involvement, the Democracy Movement. The use of force against demonstrations in Tiananmen Square and other cities in China demonstrated the party's determination to prevent largescale public mobilization with force if needed.

It is difficult to avoid the conclusion that China's leaders have reflected very carefully on the collapse of single-party states in 1989, culminating in the collapse of the Soviet Union itself. They appear to have settled on a longterm coordinated strategy aimed at preventing the emergence of the particular factors that led to those political catastrophes. They are committed to fulfilling the expectations of the public that the economy will continue to grow and support rising standards of living for the mass of the population. So economic growth has remained a very high priority. Second, they are vigilant in monitoring ideological correctness, suppressing individuals and groups who continue to advocate for universal human rights, democracy, and individual freedoms. And they are unstinting in providing the resources needed by the state organizations through which censorship, political repression, and ideological correctness are maintained. And finally, they appear to be willing to use overwhelming force if necessary to prevent largescale public protests. The regime seems very confident that a pathway of future development that continues to support material improvement for the population while tightly controlling ideas and public discussions of political issues will be successful. And it is hard to see that this calculation is fundamentally incorrect.

Indeed, the Chinese government is very careful about ideology.
http://blog.press.princeton.edu/2017/11/30/ya-wen-lei-ideological-struggles-and-chinas-contentious-public-sphere/