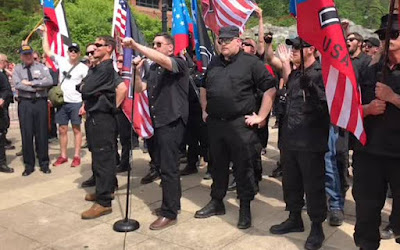 Steve Bannon may have lost his perch in the White House and Breitbart; but the themes of white supremacy, intolerance, bigotry, and anti-government extremism that drive radical nationalist populism survive his fall. In The New Minority: White Working Class Politics in an Age of Immigration and Inequality Justin Gest attempts to explain how this movement has been able to draw support from white working class men and women -- often in support of policies that are objectively harmful to them. Here is how he describes his central concern:


In this book, I suggest that these trends [towards polarization] intensify an underlying demographic phenomenon: the communities of white working class people who once occupied the political middle have decreased in size and moved to the fringes, and American and European societies are scrambling to recalibrate how they might rebuild the centrist coalitions that engender progress.

The book makes use of both ethnographic and survey research to attempt to understand the political psychology of these populations of men and women in Western Europe and the United States -- low-skilled workers with limited education beyond secondary school, and with shrinking opportunities in the economies of the 2000s.

A particularly interesting feature of the book is the ethnographic attempt Gest makes to understand the mechanisms and content of this migration of political identity. Gest conducted open-ended interviews with working class men and women in East London and Youngstown, Ohio in the United States -- both cities that were devastated by the loss of industrial jobs and the weakening of the social safety net in the 1970s and 1980s. He calls these "post-traumatic cities" (7). He addresses the fact that white working class people in those cities and elsewhere now portray themselves as a disadvantaged minority.


There and elsewhere, the white working class populations I consider are consumed by a nostalgia that expresses bitter resentment toward the big companies that abandoned their city, a government that did little to stop them from leaving, and a growing share of visible minorities who are altering their neighborhoods’ complexion. (10)

The political psychology of resentment plays a large role in the populations he studies -- resentment of government that fails to deliver, resentment of immigrants, resentment of affirmative action for racial minorities. The other large idea that Gest turns to is marginality -- the idea that these groups have that their voices will not be heard and that the powerful agents in society do not care about their fates.


Rather, this is to say that—across the postindustrial regions of Western Europe and North America—white working class people sense that they have been demoted from the center of their country’s consciousness to its fringe. And many feel powerless in their attempts to do something about it. (15)

And resentment and marginality lead for some individuals to a political stance of resistance:


Unimpressed with Labour’s priorities, profoundly distrustful of government, and unwilling to join forces with working class immigrants, Barking and Dagenham’s working class whites are now engaged in a largely unstructured, alternative form of minority politics. They tend to be focused on local affairs, fighting for scarce public resources and wary of institutionalized discrimination against them. The difficulty has been having their claims heard, and taken seriously. (71)

The resentments and expressions of marginality in Youngstown are similar, with an added measure of mistrust of large corporations like the steel companies that abandoned the city and a recognition of the pervasive corruption that permeates the city. Here is Evelyn on the everyday realities of political corruption in Youngstown:


The more I saw, the more I realized that money can buy your way out of anything. Then you see your sheriff get indicted, your congressman dishonored, our prosecutor in prison, and a mayoral nominee with a cloud over his head. The Valley has been embroiled in political corruption for a long time, and people just look out for themselves. It makes you sick. You don’t see it firsthand, the corruption, but you know it’s there. (128)

The overriding impression gained from these interviews and Gest's narrative is one of hopelessness. These men and women of Youngstown don't seem to see any way out for themselves or their children. The pathway of upward mobility through post-secondary education does not come up at all in these conversations. And, as Case and Deaton argue from US mortality statistics (link), social despair is associated with life-ending behaviors such as opioids, alcohol abuse, and suicide.

Gest's book lays the ground for thinking about a post-traumatic democratic politics -- a politics that is capable of drawing together the segments of American or British society who genuinely need progressive change and more egalitarian policies if they are to benefit from economic progress in the future. But given the cultural and political realities that Gest identifies among this "new minority", it is hard to avoid the conclusion that crafting such a political platform will be challenging.

I am reading "White Trash:The 400-Year Untold History of Class in America." Disdain for those who have not participated in or enjoyed the economic benefits goes back to Colonial Virginia. Unfortunately, nothing has changed for the marginalized: only the way society chooses to explain the root causes of their "deficiencies." From laziness, inferior breeding, lack of moral character it seems they will always be with us and very little can be done to change their status or class. It is even more tragic when you consider labor free, indentured, slave, immigrant, blue collar built this country.

With relation to communities such as the one discussed here, the problem that perhaps needs to be focused is not so much the socio-cultural developments that these communities view as threats, but rather the (collective or individual) response, or type of response, to these threats. These responses may be the product of fear and the (perhaps sensed) inadequacy of their conventional understanding of social change, or the product of creative and rational purposeful adaptive action. Separatist, divisive, exclusionary and self-centred attempts at solutions are not likely to be successful, and this likelihood can be known beforehand. There may be a certain similarity, with relation to cultural resources, between these communities and urban black communities after the educated and upwardly mobile neighbours have moved out. A healthy community seems to require a diversity of kinds of members, in terms of class, education, background and ethnicity.