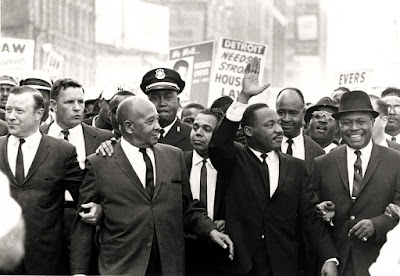 The first American Revolution broke the bonds of control exercised by a colonial power over the actions and aspirations of a relatively small number of people in North America in 1776 -- about 2.5 million people. The second American Revolution promises to affect vastly larger numbers of Americans and their freedom, and it is not yet complete. (There were about 19 million African-Americans in the United States in 1960.)

This is the Civil Rights revolution, which has been underway since 1865 (the end of the Civil War); which took increased urgency in the 1930s through the 1950s (the period of Jim Crow laws and a coercive, violent form of white supremacy); and which came to fruition in the 1960s with collective action by thousands of ordinary people and the courageous, wise leadership of men and women like Dr. Martin Luther King, Jr. When we celebrate the life and legacy of MLK, it is this second American revolution that is the most important piece of his legacy.

And this is indeed a revolution. It requires a sustained and vigilant struggle against a powerful status quo; it requires gaining political power and exercising political power; and it promises to enhance the lives, dignity, and freedoms of millions of Americans.

This revolution is not complete. The assault on voting rights that we have seen in the past decade, the persistent gaps that exist in income, health, and education between white Americans and black Americans, the ever-more-blatant expressions of racist ideas at the highest level -- all these unmistakeable social facts establish that the struggle for racial equality is not finished.

Dr. King's genius was his understanding from early in his vocation that change would require courage and sacrifice, and that it would also require great political wisdom. It was Dr. King's genius to realize that enduring social change requires changing the way that people think; it requires moral change as well as structural change. This is why Dr. King's profoundly persuasive rhetoric was so important; he was able to express through his speeches and his teaching a set of moral values that almost all Americans could embrace. And by embracing these values they themselves changed.

The struggle in South Africa against apartheid combined both aspects of this story -- anti-colonialism and anti-racism. The American civil rights movement focused on uprooting the system of racial oppression and discrimination this country had created since Reconstruction. It focused on creating the space necessary for African-American men and women, boys and girls, to engage in their own struggles for freedom and for personal growth. It insisted upon the same opportunities for black children that were enjoyed by the children of the majority population.

Dr. King had a fundamental optimism that was grounded in his faith: "the arc of the moral universe is long, but it bends toward justice." But of course we understand that only long, sustained commitment to justice can bring about this arc of change. And the forces of reaction are particularly strong in the current epoch of political struggle. So it will require the courage and persistence of millions of Americans to these ideals if racial justice is finally to prevail.

Here is an impromptu example of King's passionate commitment to social change through non-violence. This was recorded in Yazoo City, Mississippi in 1966, during James Meredith's March against Fear.

.
Actually, if you want to be precisely accurate, the first Civil Rights Revolution was in 1776, when seditious slaveowners who did not want to pay their taxes, claimed oppression and spoke of freedom and liberty, treacherously betrayed their King and got a lot of people killed so they could evade their taxes.
But no freedom and liberty for the slaves.
Then when the “oppressive” British Empire abolished slavery in 1833, without killing two percent of its population in a civil war and even had the “oppressive” ROYAL NAVY INTERDICTING SLAVE SHIPS, the free and liberated United States kept its slaves.
So no Revolutionary War and slaves would have been freed decades earlier.
Something to think about when you bite into that Fourth of July hot dog. Try not to choke.
.

The United States is certainly not nor has it ever been a "perfect" government or place to live. The saving grace of the United States is that eventually, through argument, debate and at times, peaceful civil disobedience has changed and evolved, moving more and more toward a more perfect society. It is the writers' opinion that we will never reach "perfection" but should never stop striving to improve our society. Those individuals that constantly look back at times of less "perfection", do the United States and its citizenry a disservice by tearing the scabs off of old wounds that were being healed by time.

The British Slavery Abolition Act of 1833 started by freeing those who had not yet reached the age of six years. That act transformed slaves into "apprentices" with a six-year term of commitment to their masters. That act did not abolish slavery in colonies controlled by the East India Company - the monopoly whose favored tax treatment was what incited the Boston Tea Party.

The British Empire then used its imperial navy to suppress the Atlantic slave trade, which reduced competition with British colonial slave labor (which centered around the Indian Ocean).

So, no Revolutionary War and the British might have left slavery to continue in their American colonies, just as they did their Indian colonies. In that scenario, would the American Colonies have been in a position to provide Britain with so much support in WWII? Or would the American Colonies have ended up being more like Afghanistan, Jordan, Iraq, India, Pakistan, Burma, Ceylon, Cyprus and so many other now-former colonies?