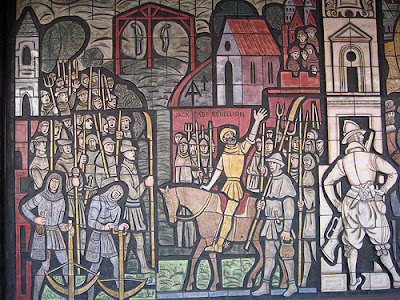 Stephen Greenblatt is a literary critic and historian whose insights into philosophy and the contemporary world are genuinely and consistently profound. His most recent book returns to his primary expertise, the corpus of Shakespeare's plays. But it is -- by intention or otherwise -- an  important reflection on the presidency of Donald Trump as well. The book is Tyrant: Shakespeare on Politics, and it traces in fascinating detail the evolution and fates of tyrants through Shakespeare's plays. Richard III gets a great deal of attention, as do Lear and Macbeth. Greenblatt makes it clear that Shakespeare was interested both in the institutions of governance within which tyrants seized power, and the psychology of the tyrant. The parallels with the behavior and psychology of the current US President are striking.

Here is how Greenblatt frames his book.


“A king rules over willing subjects,” wrote the influential sixteenth-century Scottish scholar George Buchanan, “a tyrant over unwilling.” The institutions of a free society are designed to ward off those who would govern, as Buchanan put it, “not for their country but for themselves, who take account not of the public interest but of their own pleasure.” Under what circumstances, Shakespeare asked himself, do such cherished institutions, seemingly deep-rooted and impregnable, suddenly prove fragile? Why do large numbers of people knowingly accept being lied to? How does a figure like Richard III or Macbeth ascend to the throne? (1)

So who is the tyrant? What is his typical psychology?


Shakespeare's Richard III brilliantly develops the personality features of the aspiring tyrant already sketched in the Henry VI trilogy: the limitless self-regard, the lawbreaking, the pleasure in inflicting pain, the compulsive desire to dominate. He is pathologically narcissistic and supremely arrogant. He has a grotesque sense of entitlement, never doubting that he can do whatever he chooses. He loves to bark orders and to watch underlings scurry to carry them out. He expects absolute loyalty, but he is incapable of gratitude. The feelings of others mean nothing to him. He has no natural grace, no sense of shared humanity, no decency. He is not merely indifferent to the law; he hates it and takes pleasure in breaking it. He hates it because it gets in his way and because it stands for a notion of the public good that he holds in contempt. He divides the world into winners and losers. The winners arouse his regard insofar as he can use them for his own ends; the losers arouse only his scorn. The public good is something only losers like to talk about. What he likes to talk about is winning. (53)

One of Richard’s uncanny skills—and, in Shakespeare’s view, one of the tyrant’s most characteristic qualities—is the ability to force his way into the minds of those around him, whether they wish him there or not. (64)

Greenblatt has a lot to say about the enablers of the tyrant -- those who facilitate and those who silently consent.


Another group is composed of those who do not quite forget that Richard is a miserable piece of work but who nonetheless trust that everything will continue in a normal way. They persuade themselves that there will always be enough adults in the room, as it were, to ensure that promises will be kept, alliances honored, and core institutions respected. Richard is so obviously and grotesquely unqualified for the supreme position of power that they dismiss him from their minds. Their focus is always on someone else, until it is too late. They fail to realize quickly enough that what seemed impossible is actually happening. They have relied on a structure that proves unexpectedly fragile. (67)

One of the topics that appears in Shakespeare's corpus is a class-based populism from the under-classes. Consider Jack Cade, the lying and violent foil to The Duke of York.


Cade himself, for all we know, may think that what he is so obviously making up as he goes along will actually come to pass. Drawing on an indifference to the truth, shamelessness, and hyperinflated self-confidence, the loudmouthed demagogue is entering a fantasyland—“ When I am king, as king I will be”—and he invites his listeners to enter the same magical space with him. In that space, two and two do not have to equal four, and the most recent assertion need not remember the contradictory assertion that was made a few seconds earlier. (37)

And what about the fascination tyrants have with secret alliances with hostile foreign powers?


Third, the political party determined to seize power at any cost makes secret contact with the country’s traditional enemy. England’s enmity with the nation across the Channel—constantly fanned by all the overheated patriotic talk of recovering its territories there, and fueled by all the treasure and blood spilled in the attempt to do so—suddenly vanishes. The Yorkists—who, in the person of Cade, had pretended to consider it an act of treason even to speak French—enter into a set of secret negotiations with France. Nominally, the negotiations aim to end hostilities between the two countries by arranging a dynastic marriage, but they actually spring, as Queen Margaret cynically observes, “from deceit, bred by necessity” (3 Henry VI 3.3.68).

How does the tyrant rule? In a word, badly.


The tyrant’s triumph is based on lies and fraudulent promises braided around the violent elimination of rivals. The cunning strategy that brings him to the throne hardly constitutes a vision for the realm; nor has he assembled counselors who can help him formulate one. He can count—for the moment, at least—on the acquiescence of such suggestible officials as the London mayor and frightened clerks like the scribe. But the new ruler possesses neither administrative ability nor diplomatic skill, and no one in his entourage can supply what he manifestly lacks. His own mother despises him. His wife, Anne, fears and hates him. (84)

Several things seem apparent, both from Greenblatt's reading of Shakespeare and from the recent American experience. One is that freedom and the rule of law are inextricably entangled. It is not an exaggeration to say that freedom simply is the situation of living in a society in which the rule of law is respected (and laws establish individual rights and impersonal procedures). When strongmen are able to use the organs of the state or their private henchmen to enact their personal will, the freedom and liberties of the whole of society are compromised.

Second, the rule of law is a normative commitment; but it is also an institutional reality. Institutions like the Constitution, the division of powers, the independence of the judiciary, and the codification of government ethics are preventive checks against arbitrary power by individuals with power. But as Greenblatt's examples show, the critical positions within the institutions of law and government are occupied by ordinary men and women. And when they are venal, timid, and bent to the will of the sovereign, they present no barrier against tyranny. This is why fidelity to the rule of law and the independence of the justice system is the most fundamental and irreplaceable ethical commitment we must demand of officials. Conversely, when an elected official demonstrates lack of commitment to the principles, we must be very anxious for the fate of our democracy.

Greenblatt's book is fascinating for the historical context it provides for Shakespeare's plays. But it is even more interesting for the critical light it sheds on our current politics. And it makes clear that the moral choices posed by politicians determined to undermine the institutions of democracy are perennial, whether in Shakespeare's time or our own.