The insights of biography 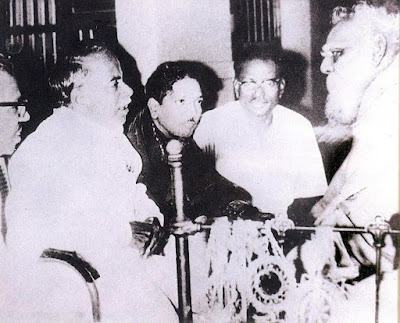 I have always found biographies a particularly interesting source of learning and stimulation. A recent example is a biography and celebration of Muthuvel Kalaignar Karunanidhi published in a recent issue of the Indian semi-weekly Frontline. Karunanidhi was an enormously important social and political leader in India for over sixty years in the Dravidian movement in southern India and Tamil Nadu, and his passing earlier this month was the occasion for a special issue of Frontline. Karunanidhi was president of the Dravidian political party Dravida Munnetra Kazhagam (DMK) for more than fifty years. And he is an individual I had never heard of before opening up Frontline. In his early life he was a script writer and film maker who was able to use his artistic gifts to create characters who inspired political activism among young Tamil men and women. And in the bulk of his career he was an activist, orator, and official who had great influence on politics and social movements in southern India. The recollection and biography by A.S. Panneerselvan is excellent. (This article derives from Panneerselvan's forthcoming biography of Karunanidhi.) Here is how Panneerselvan frames his narrative:


In a State where language, empowerment, self-respect, art, literary forms and films coalesce to lend political vibrancy, Karunanidhi's life becomes a sort of natural metaphor of modern Tamil Nadu. His multifaceted personality helps to understand the organic evolution of the Dravidian Movement. To understand how he came to the position to wield the pen and his tongue for his politics, rather than bombs and rifles for revolution, one has to look at his early life. (7)

I assume that Karunanidhi and the Dravidian political movement would be common currency for Indian intellectuals and political activists. For an American with only a superficial understanding of Indian politics and history, his life story opens a whole new aspect of India's post-independence experience. I think of the primary dynamic of Indian politics since Independence as being a struggle between the non-sectarian political ideas of Congress, the Hindu nationalism of BJP, and the secular and leftist position of India's Communist movement. But the Dravidian movement diverges in specific ways from each of these currents. In brief, the central thread of the Dravidian is the rejection of the cultural hegemony of Hindi language, status, and culture, and an expression of pride and affirmation in the cultures and traditions of Tamil India. Panneerselvan describes an internal difference of emphasis on the topic of language and culture within the early stage of the Dravidian movement:


The duality of the Self-Respect Movement emerged very clearly during this phase. While Periyar and Annadurai were in total agreement in the diagnosis of the social milieu, their prognoses were quite opposite: For Periyar, language was an instrument for communication; for Annadurai, language was an organic socio-cultural oeuvre that lends a distinct identity and a sense of pride and belonging to the people. (13).

The Dravidian Movement was broadly speaking a movement for social justice, and it was fundamentally supportive of the rights and status of dalits. The tribute by K. Veeramani expresses the social justice commitments of DMK and Karunanidhi very well:


The goal of dispensation of social justice is possible only through reservation in education and public employment, giving adequate representation to the Scheduled Castes, the Scheduled Tribes and Other Backward Classes. Dispensation of social justice continues to be the core principle of the Dravidian movement, founded by South Indian Liberal Federation (SILF), popularly known as the Justice Party. (36) ... The core of Periyar's philosophy is to bring about equality through equal opportunities in a society rife with birth-based discrimination. Periyar strengthened the reservation mode as a compensation for birth-based inequalities. In that way, reservation has to be implemented as a mode of compensatory discrimination. (38)

Also important in the political agenda of the Dravidian Movement was a sustained effort to improve the conditions of tenants and agricultural workers through narrowing of the rights of landlords. J. Jeyaranjan observes:


The power relation between the landlord and the tenant is completely reversed, with the tenant enjoying certain powers to negotiate compensation for giving up the right to cultivate. Mobilisations by the undivided Communist Party of India (CPI) and the Dravidian movement, the Dravidar Kazhagam in particular, have been critical to the creation of a culture of collective action and resistance to landlord power. Further, the coming to power of the Dravida Munnetra Kazhagam (DMK) in 1967 created conditions for consolidating the power of lower-caste tenants who benefited both from a set of State initiatives launched by the DMK and the culture of collective action against Brahmin landlords. (52)

What can be learned from a detailed biography of a figure like Karunanidhi? For myself the opportunity such a piece of scholarship permits is to significantly broaden my own understanding of the nuances of philosophy, policy, values, and institutions through which the political developments of a relatively unfamiliar region of the world have developed. Such a biography allows the reader to gain a vivid experience of the issues and passions that motivated people, both intellectuals and laborers, in the 1920s, the 1960s, and the 1990s. And it gives a bit of insight into the complicated question of how talented individuals develop into impactful, committed, and dedicated leaders and thinkers.

(Here is a collection of snippets from Karunandhi's films; link.)