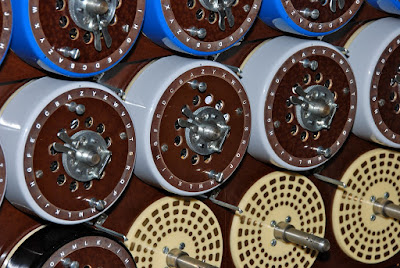 A recent post comments on the value of biography as a source of insight into history and thought. Currently I am reading Andrew Hodges' Alan Turing: The Enigma (1983), which I am finding fascinating both for its portrayal of the evolution of a brilliant and unconventional mathematician as well as the honest efforts Hodges makes to describe Turing's sexual evolution and the tragedy in which it eventuated. Hodges makes a serious effort to give the reader some understanding of Turing's important contributions, including his enormously important "computable numbers" paper. (Here is a nice discussion of computability in the Stanford Encyclopedia of Philosophy; link.) The book also offers a reasonably technical account of the Enigma code-breaking process.

Hilbert's mathematical imagination plays an important role in Turing's development. Hilbert's speculation that all mathematical statements would turn out to be derivable or disprovable turned out to be wrong, and Turing's computable numbers paper (along with Godel and Church) demonstrated the incompleteness of mathematics. But it was Hilbert's formulation of the idea that permitted the precise and conclusive refutations that came later. (Here is Richard Zack's account in the Stanford Encyclopedia of Philosophy of Hilbert's program; link.)

And then there were the machines. I had always thought of the Turing machine as a pure thought experiment designed to give specific meaning to the idea of computability. It has been eye-opening to learn of the innovative and path-breaking work that Turing did at Bletchley Park, Bell Labs, and other places in developing real computational machines. Turing's development of real computing machines and his invention of the activity of "programming" ("construction of tables") make his contributions to the development of digital computing machines much more advanced and technical than I had previously understood. His work late in the war on the difficult problem of encrypting speech for secure telephone conversation was also very interesting and innovative. Further, his understanding of the priority of creating a technology that would support "random access memory" was especially prescient. Here is Hodges' summary of Turing's view in 1947:


Considering the storage problem, he listed every form of discrete store that he and Don Bayley had thought of, including film, plugboards, wheels, relays, paper tape, punched cards, magnetic tape, and ‘cerebral cortex’, each with an estimate, in some cases obviously fanciful, of access time, and of the number of digits that could be stored per pound sterling. At one extreme, the storage could all be on electronic valves, giving access within a microsecond, but this would be prohibitively expensive. As he put it in his 1947 elaboration, ‘To store the content of an ordinary novel by such means would cost many millions of pounds.’ It was necessary to make a trade-off between cost and speed of access. He agreed with von Neumann, who in the EDVAC report had referred to the future possibility of developing a special ‘Iconoscope’ or television screen, for storing digits in the form of a pattern of spots. This he described as ‘much the most hopeful scheme, for economy combined with speed.’ (403)

These contributions are no doubt well known by experts on the history of computing. But for me it was eye-opening to learn how directly Turing was involved in the design and implementation of various automatic computing engines, including the British ACE machine itself at the National Physical Laboratory (link). Here is Turing's description of the evolution of his thinking on this topic, extracted from a lecture in 1947:


Some years ago I was researching on what might now be described as an investigation of the theoretical possibilities and limitations of digital computing machines. I considered a type of machine which had a central mechanism and an infinite memory which was contained on an infinite tape. This type of machine appeared to be sufficiently general. One of my conclusions was that the idea of a ‘rule of thumb’ process and a ‘machine process’ were synonymous. The expression ‘machine process’ of course means one which could be carried out by the type of machine I was considering…. Machines such as the ACE may be regarded as practical versions of this same type of machine. There is at least a very close analogy. (399)

At the same time his clear logical understanding of the implications of a universal computing machine was genuinely visionary. He was evangelical in his advocacy of the goal of creating a machine with a minimalist and simple architecture where all the complexity and specificity of the use of the machine derives from its instructions (programming), not its specialized hardware.

Also interesting is the fact that Turing had a literary impulse (not often exercised), and wrote at least one semi-autobiographical short story about a sexual encounter. Only a few pages survive. Here is a paragraph quoted by Hodges:


Alec had been working rather hard until two or three weeks before. It was about interplanetary travel. Alec had always been rather keen on such crackpot problems, but although he rather liked to let himself go rather wildly to newspapermen or on the Third Programme when he got the chance, when he wrote for technically trained readers, his work was quite sound, or had been when he was younger. This last paper was real good stuff, better than he'd done since his mid twenties when he had introduced the idea which is now becoming known as 'Pryce's buoy'. Alec always felt a glow of pride when this phrase was used. The rather obvious double-entendre rather pleased him too. He always liked to parade his homosexuality, and in suitable company Alec could pretend that the word was spelt without the 'u'. It was quite some time now since he had 'had' anyone, in fact not since he had met that soldier in Paris last summer. Now that his paper was finished he might justifiably consider that he had earned another gay man, and he knew where he might find one who might be suitable. (564)

The passage is striking for several reasons; but most obviously, it brings together the two leading themes of his life, his scientific imagination and his sexuality.

This biography of Turing reinforces for me the value of the genre more generally. The reader gets a better understanding of the important developments in mathematics and computing that Turing achieved, it presents a vivid view of the high stakes in the secret conflict that Turing was a crucial part of in the use of cryptographic advances to defeat the Nazi submarine threat, and it gives personal insights into the very unique individual who developed into such a world-changing logician, engineer, and scientist.