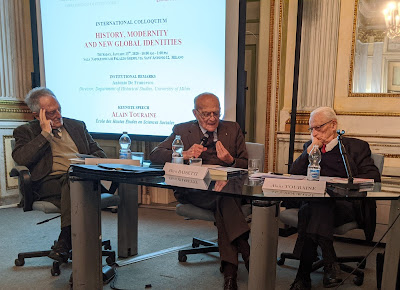 Alain Touraine, now in his tenth decade, published Défense de la modernité in 2018 as a statement of his current thinking about the meaning of modernity, and it is a striking contribution. Touraine participated in a seminar on the book at the University of Milan last week, with discussions by Profs. Marino Regini (Milan), Elena Pulcini (Florence), Fabio Rugge (Pavia), Piero Bassetti (Milan), and Davide Cadeddu (Milan), and it was a privilege to be able to attend. Touraine is one of France's most influential sociologists who has contributed important insights into the processes of social movements and contentious politics throughout his long career.

Hearing Touraine speak in Milan made me want to read more, so I've picked up Solidarity: The Analysis of a Social Movement: Poland 1980-1981, and it is a tour-de-force. By happy coincidence it complements the discussion I'm having in one of my courses on McAdam, Tarrow, and Tilly's book Dynamics of Contention, and it is a fascinating complement to the kinds of analysis that MTT apply to a number of cases of contentious politics. The book is a micro-sociology of the Solidarity Movement as a social movement, and it is based on a number of extensive sets of interviews conducted by a team of French and Polish researchers under Touraine's direction in 1981. Here are a few especially interesting snippets from the introduction to the volume.


The most important [question for research] concerns the nature of the movement: Solidarity is a trade union but, obviously, more than a trade union. It is a workers' movement born in the factories where it is now fighting against repression, but it is also a national movement and a struggle for democratisation of society...

The second question is less obvious, but is of greater challenge to received notions. Is Solidarity a movement, an upsurge of collective will, with all the richness which we have just suggested, or is it in fact the instrument for the reconstruction of a whole society, for the renewal of social institutions and even of those economic and social forces which may eventually enter into conflict with Solidarity itself? ...

The third question follows from the brutal rupture of December 1981. At the beginning, Solidarity managed to limit itself and tis demands to such an extent that the agreements signed after the strikes of August 1980 acknowledged the Party's leading role in the state and the sanctity of Poland's international alliances. But was the movement not gradually drawn into a struggle for power itself? (2-3)

These research questions are crucial, because they frame the ways in which the investigators structure their research and their interpretation of the discussions that they engage in with participants.

Touraine also explains and justifies the choice to conduct their research around interviews and discussions with rank-and-file members of the movement rather than ideological leaders. His answer is brilliant:

Because, in a social movement, the participants are far more than just a base prompted by questions of immediate self-interest which it is the leaders' job to transform into a programme and a set of political strategies. Solidarity's enemies have often claimed that its worker members were straightforward trade unionists, whereas the leaders were political agitators. If one listens for a moment to the rank and file, it very quickly becomes apparent that this accusation is groundless, that in each of our research groups just as in every enterprise we visited, the big questions -- political freedoms, national independence, industrial management, social justice -- are as constantly present as they are in the debates of Solidarity's National Committee. (4-5)

And crucially, Touraine emphasizes the self-representation and identity formation that was a key part of this movement. "The members of Solidarity are not only conscious of being downtrodden; they have a positive awareness of themselves and of their rights.... Their movement is not a mechanical reaction to oppression which has become unbearable; it manifests ideas, choices, a collective will" (5)

Familiarity with Solidarity should convince us -- and one of the aims of this book is to help establish this belief -- that men and women are not subject to historical laws and material necessity, that they produce their own history through their cultural creations and social struggles, by fighting for the control of those changes which will affect their collective and in particular their national life. (5)

Touraine is ahead of his time in the study of contention and social movements in emphasizing agency and the creative human effort to define themselves in meaningful terms.

Touraine describes the method of the project as "sociological intervention".

The most immediately apparent feature of sociological intervention is that it seeks to define the meaning which the actors themselves attribute to their action. (7)

This can be described as ethno-sociology or micro-sociology; it is a method that is designed to allow the researchers to gain a textured and accurate view of the self-understandings of the participants (both in common and sometimes diversely).

Touraine and his colleagues regard the suppression of Solidarity by the military in Poland in 1981 as the beginning of the end for totalitarian control of the Polish people:


Today, in Communist Central Europe, totalitarianism is dying. The Hungarian revolution, the Prague Spring and then Solidarity fuelled hopes, which lasted for a few days, a few months or more than a year, that it would be replaced by democracy. Everywhere, forces of arms won the day: Hungary and Czechoslovakia were invaded by a foreign army, while in Poland a military and political ruler acted as the Soviet Union wished, so avoiding the heavy diplomatic price which would have been paid for open intervention. But popular movements and uprisings are not the only victim of this violence. From now on, the Communist regime can no longer claim to speak in the name of society and history: its only foundation is force, and it has lost the legitimacy on which it based its totalitarian ambitions. (191)

These were prophetic words.