The assault on democracy by the right 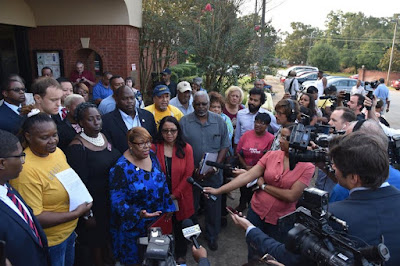 A democracy depends crucially upon a core set of normative commitments that are accepted on all sides -- political parties, citizens, government officials, judges, legislators. Central among these is the idea of the political equality of all citizens and the crucial importance of maintaining equality in the availability of access to formal political involvement in democratic processes. In particular, the right to vote must be inviolate for every citizen, without regard to region, religion, gender, race, national origin, or any other criterion. John Rawls encapsulates these commitments within his conception of the political values of a just society in Political Liberalism.

The third feature of a political conception of justice is that its content is expressed in terms of certain fundamental ideas seen as implicit in the public political culture of a democratic society. This public culture comprises the political institutions of a constitutional regime and the public traditions of their interpretation (including those of the judiciary), as well as historic texts and documents that are common knowledge. (13) … A sense of justice is the capacity to understand, to apply, and to act from the public conception of justice which characterizes the fair terms of social cooperation. Given the nature of the political conception as specifying a public basis of justification, a sense of justice also expresses a willingness, if not the desire, to act in relation to others on terms that they also can publicly endorse. (18)

The Voting Rights Act in 1965 was an important step in the development of racial equality in the United States for a number of reasons; but most important was the clear statement it made guaranteeing voting rights to African-American citizens, and the judicial remedies it established for addressing efforts made in various states or localities to limit or block the exercise of those rights. The act prohibited literacy tests for voting rights and other practices that inhibited or prevented voter registration and voter participation in elections.

However, the Supreme Court decision in 2013 (Shelby County v Holder) eliminated the fundamental force of the 1965 act by removing the foundation of the requirement of pre-clearance of changes in voting procedures in certain states and jurisdictions. This action appears to have had the effect of allowing states to take steps that reduce participation in elections by under-served minorities (link).

Also important is the idea that the formal decisions within a democracy should depend upon citizens' preferences, not the expenditure of money in favor of or against a given candidate or act of legislation. The Supreme Court's decision in 2010 in the case of Citizens United v Federal Election Commission found the 2002 Bipartisan Campaign Reform Act to be unconstitutional because it restricted the freedom of speech of legal persons (corporations and unions). This ruling gave essentially unlimited rights to corporations to provide financial support to candidate and legislative initiatives; this decision in one stroke diminished the political voice of ordinary voters to a vanishing level. Big money in politics became the decisive factor in determining the outcomes of political disagreements within our democracy. (Here is a summary from the Washington Post on the effects of Citizens United on campaign spending; link.)

The 2014 book by Doug McAdam and Karina Kloos, Deeply Divided: Racial Politics and Social Movements in Postwar America, is profoundly alarming for a number of reasons. They make clear the pivotal role that the politics of race have played in American electoral politics since the Nixon presidency. Most recently, the Tea Party social movement appears to be substantially motivated by racism.


The question is: where did this upsurge in “old-fashioned racism” come from? Based on the best survey data on support for the Tea Party, it seems reasonable to credit the movement for at least some of the infusion of more extreme racial views and actions into American politics. We begin by considering the racial attitudes of Tea Party supporters and what that suggests about the animating racial politics of the movement wing of the Republican Party. In this, we rely on two sources of data: the multi-state surveys of support for the Tea Party conducted by Parker and Barreto in 2010 and 2011 and Abramowitz’s analysis of the October 2010 wave of the American National Election Studies. (KL 5008)

Based on this survey data, they conclude:


Support for the Tea Party is thus decidedly not the same thing as conventional conservatism or traditional partisan identification with the Republican Party. Above all else, it is race and racism that runs through and links all three variables discussed here. Whatever else is motivating supporters, racial resentment must be seen as central to the Tea Party and, by extension, to the GOP as well in view of the movement’s significant influence within the party. (KL 5053)

Most alarming is the evidence McAdam and Kloos offer of a deliberate, widespread effort to suppress the voting rights of specific groups. Voter suppression occurs through restrictions on the voting process itself; and more systemically, it occurs through the ever-more-impactful ability of state legislators to engage in data-supported strategies of gerrymandering. And they connect the dots from these attitudes about race to political strategies by elected officials reflecting this movement:


Nor is the imprint of race and racism on today’s GOP only a matter of attitudes. It was also reflected in the party’s transparent efforts to disenfranchise poor and minority voters in the run-up to the 2012 election. It may well be that the country has never seen a more coordinated national effort to constrain the voting rights of particular groups than we saw in 2012. Throughout the country, Republican legislators and other officials sought to enact new laws or modify established voting procedures which, in virtually all instances, would have made it harder—in some cases, much harder—for poor and minority voters to exercise the franchise. (KL 5053)

Through gerrymandering the votes of a large percentage of the electorate are functionally meaningless; they live in districts that have been designed as "safe districts" in which the candidates of one party (most commonly the Republican Party, though there are certainly examples of Democratic gerrymandering as well) are all but certain to win election. Consider these completely deranged districts from Illinois, Georgia, Louisiana, and North Carolina: 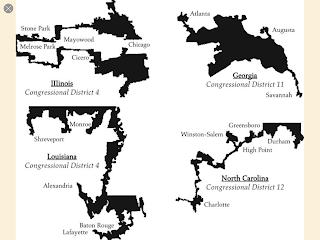 And nation-wide, the power of state legislatures to create gerrymandered districts has led to a lopsided political map, where only a few districts are genuinely competitive: 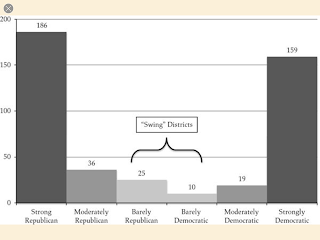 So the preferences of a given block of voters among candidates in a Republican safe district have zero likelihood of bringing about the election of the competing candidate. McAdam and Kloos are very explicit about the threat to democracy these efforts and the deliberateness with which the Republican Party has carried out these strategies over the past several decades. They are explicit as well in documenting the goal of these efforts: to suppress votes by racial groups who have traditionally supported Democratic candidates for office.

The efforts at voter suppression documented by McAdam and Kloos have continued unabated, even accelerated, since the 2014 publication of their book.

The hard question raised by Deeply Divided is not answered in the book, because it is very hard to answer at all: how will the public manage to claim back its rights of equality and equal participation? How will democracy be restored as the operative principle of our country?