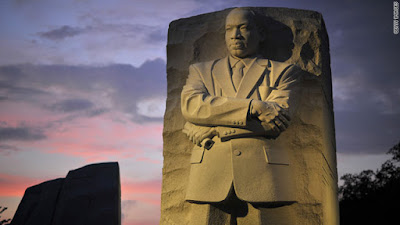 Our democracy is shaken by the extreme right today, and racism lies at the bottom of the fears and antagonisms that have been used to stir up violent actions and threats against our government and our democratic institutions. Republican leaders, Fox News executives and personalities, incendiary conspiracy-theory followers, ordinary Americans everywhere ... step back from the precipice, recall for yourselves what our American democracy can be, and step back to embrace the democratic values that we all must share. Dr. King helped us with his vision and his activism. But more than fifty years after his murder, our country has not embraced the vision of equality and multi-racial democracy for which he advocated, and for which he gave his life.

Here is a beautiful contribution to the NPR Story Corps that records Clara Jean Ester's memory of being present for Dr. King's final speech in Memphis and his assassination at the Lorraine Motel (link). It is an amazing piece of historical memory and deeply moving.

And here is a short excerpt from Dr. King's speech at the National Cathedral on March 31, 1968, in which he speaks of the arc of history (link). It speaks to a fundamental confidence in the eventual triumph of the struggle for freedom and equality. Was Dr. King right?

We shall overcome because the arc of the moral universe is long but it bends toward justice. MLK, March 31, 1968