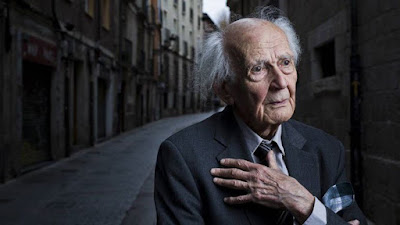 Zygmunt Bauman (1925-2017) was an influential voice in the world of sociological theorizing. In the second part of his career -- following his expulsion as a dissident and a Jew from Poland in 1968 -- he came to be recognized as a non-conventional thinker about "modernity" and the modern world. His idea of "liquid modernity" (link), late in his career, was a very interesting and original way of thinking about the twentieth century. But Bauman was not just a theorist; he was a participant in history -- the subject of anti-Semitic mistreatment and bullying as a child in Poland, a refugee, a socialist and communist activist, a Soviet-trained soldier and political officer in the Soviet-installed Polish army, a stateless person again after his expulsion from Poland in 1968 during the major "state pogrom" of that year, and eventually a critic of Stalinist Communism. He was a thinker, a doer, and a contributor to sociological theory.
A particularly interesting question is whether we can connect the life and the sociological writings and theories that Bauman created during his long career. Did his life experiences give him the some of the intellectual resources necessary to comprehend the catastrophes of genocide, mass enslavement, and totalitarianism? It will be surprising to find that the answer seems largely to be, no. There is little of the historical realities that Bauman observed and participated in to be found in his writings. (The Bauman Institute at the University of Leeds has a comprehensive bibliography of Bauman's writings throughout his career; link.)

Izabela Wagner's thoughtful and thorough Bauman: A Biography is an excellent source for trying to answer the question: how did Bauman become Bauman? (And, we might add, when?) What experiences and conditions helped to create the sociological imagination of this singular man, and how did his personal history contribute to the creation of such an exceptional and original intellectual?

Several features of character were evident in the young Bauman and persisted through the end of his career: intellectual curiosity, independence of mind, courage, humor, and measured cautiousness. His intellectual training -- first in the USSR and then in Warsaw -- was deeply embedded within an especially dogmatic ideological framework -- the strictures of dialectical materialism and Marxist-Leninist thought as embodied in official Soviet ideology. And yet as a young sociology PhD student in Warsaw in the 1950s Bauman was exposed to a "dissident" strand of sociological thinking that contributed to a broader perspective on the regime that he served. Out of that chemistry came a surprising mix -- a sociology that expressed itself in Marxist-Leninist terms, an openness to sociological research from Europe and the United States, and a view of society and the state that reflected a more "humanist" and democratic view (like that of Leszek Kołakowski). But here is the surprise for an intellectual historian: none of this seems to reflect the concrete historical life circumstances that Bauman experienced; rather, it is very similar to the kind of trajectory a talented graduate student takes through engagement with a number of intriguing philosophical perspectives.

It is worth reflecting on Bauman's history as a committed and sincere communist from his teenage years in the 1930s onward until the early 1960s. Writers like Judt and Orwell have criticized leftist intellectuals unforgivingly for their failure to observe and denounce the massive crimes of Stalin in the 1930s. But these are exactly the years in which Bauman gained his communist identity -- briefly in Poland and then more deeply in exile as a high school student in the Soviet Union. Wagner spends a good deal of time on the formation of Bauman's identity as a communist youth and eventually communist functionary. She argues that it is a perfectly intelligible journey for a young Polish Jew who cared about social justice and equality. A return to the political and social arrangements of pre-war Poland was not even remotely attractive to Bauman, given its profound anti-Semitism and the enormous social inequalities it embodied. Communism, Wagner argues, provided a coherent view of a future in which all citizens would be treated equally, anti-Semitism would not exist, and social inequalities would disappear. Of course that is not at all how things turned out -- in Poland or in the USSR.

But the central point here -- the question of the formation of the social imagination of Zygmunt Bauman -- is that his historical experience in the 1930s and 1940s might have given him a particular and well-defined framework for understanding the potential for evil in modern totalizing states. It did not. Little of his life experience prior to 1945 seems to have had a profound influence on his sociological imagination, or on the topics that he chose to pursue as an academic sociologist. In particular, his early career in the 1950s and 1960s contains almost no reflection on the Holocaust, genocide, political murder, or the origins of totalitarianism. This is evident by examining the extensive bibliography of his writings compiled by the Bauman Center mentioned above.

As a rising sociologist and professor in Warsaw, Bauman chose a cautious path that nonetheless continued to adhere to the idea of "open Marxism" -- a more humanist alternative to Stalinist doctrine. And in the early 1960s he became -- once again, cautiously -- an intellectual source of inspiration for students at the University of Warsaw who demanded greater freedom, greater democracy, and less bureaucracy in their government. Bauman, like other academics, was under constant surveillance by the secret service. The activities and activism of University of Warsaw students led to a major demonstration at the university in March 1968, violently suppressed by the regime, and followed quickly by a hate-based campaign by the Gomułka government placing all blame on "Jewish" elements in the university. This resulted in a massive purge of Jews from government jobs, including in the universities, and to the expulsion of many thousands of Jews (including Zygmunt and Janina and their children) from Poland.

Bauman's experience in post-war Poland (1945-1968) demonstrated the profound failure of the Communist ideal as well as the insidious power of anti-Semitism in post-war Communist Poland, and these experiences did have an effect on his subsequent development as a social thinker. But it is unclear whether these experiences led to a profound change in the ways that Bauman undertook to understand the social world. (Significantly, his contemporary Leszek Kołakowski broke from support for the Communist regime in Poland a decade earlier than Bauman, and Kołakowski's shift seems more profound than Bauman's.)

The question posed above seems to have a fairly clear answer, then: Bauman's life experience in the 1930s through 1950s (from his teenage years as a persecuted Jewish boy in Posnan through his service in the Polish Army and his appointments at the University of Warsaw) had surprisingly little influence on his worldview and his intellectual framework. His sociological imagination appears to be the result of his engagement with other academic sociologists rather than with the realities of social life in the horrific decades of war and genocide. Most significant were the intellectual and academic influences to which he was exposed -- Marxist-Leninism, open Marxism, Western sociology -- and his own creative imagination in raising questions within those various frameworks. Bauman contributed little to understanding the horrific realities of the twentieth century (unlike Hannah Arendt, for example), and he confined much of his writing to a level of abstract theorizing that offered little help in understanding totalitarianism, the Holocaust, or the criminality of Stalinism.

Even his signature ideas -- modernity and liquid modernity -- have little concrete engagement with the specifics of the totalitarian regimes of violence and murder that he experienced under Hitler and Stalin. In a later post I will discuss his 1989 book, Modernity and the Holocaust, which does indeed engage the genocidal regime of the Nazi period. Here are a few sentences:

It is not the Holocaust which we find difficult to grasp in all its monstrosity. It is our Western Civilization which the occurrence of the Holocaust has made all but incomprehensible -- and this at a time when we thought we had come to terms with it and seen through its world-wide, unprecedented cultural expansion. If Hilberg is right, and our most crucial social institutions elude our mental and practical grasp, then it is not just the professional academics who ought to be worried. (84)

But note -- this book was written and published in 1989 -- a half century after the Nazi crimes that Bauman himself witnessed. In a surprising way, Bauman's intellectual and scientific work seems always to be at a great distance from the historical realities that he himself experienced. And that is indeed surprising. The comparison is perhaps not a fair one, but think of Orwell, and the close parallels that existed between his lived experiences of poverty, class, war, colonialism, and fascism, and the depth and insight of his writings. Can we imagine Orwell without Catalonia? Not at all. But it is not at all difficult to imagine Bauman without Poznań, Majdanek, or the Red Army.

(Here is a recollection of Bauman by several of his colleagues in English sociology; link.)