Kołakowski on Stalinism and reform 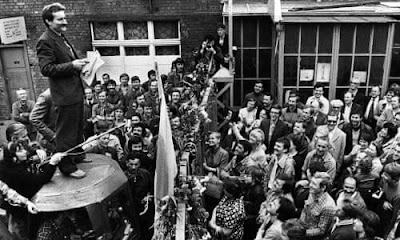 A recent post featured the evolution of the thought of Zygmunt Bauman. There I mentioned a comparison with his Warsaw contemporary, Leszek Kołakowski, and suggested that Kołakowski's break with Stalinism was earlier and more profound than Bauman's. I am not able to find a full-length biography of Kołakowski, but his history parallels that of Bauman. He was born in Radom, Poland, in 1927, and in 1939 had personal and tragic experience of the Nazi invasion of Poland. And, like Bauman, he was expelled from Poland in 1968 and spent much of the rest of his career in the west (at Oxford, in Kołakowski's case, and at Leeds, in Bauman's case). Here are a few lines from Steven Lukes' biographical statement on Kołakowski in the Oxford Dictionary of National Biography:
After the Nazis invaded Poland, Kolakowski's father was arrested by the Gestapo and later executed. His remaining family found refuge in a village in eastern Poland where Kolakowski's secret, largely solitary education was aided by teachers from the Polish underground. ... Kolakowski had embraced Communism as the Russians drove the Germans out of Poland, thinking it promised a better world of equality and freedom, but he then moved away from Soviet-style Marxism and became increasingly influential on the younger generation of Poles as a leading voice for democratization and reformed Communism, or what came to be called ‘revisionism’. This led to his expulsion from the university, constant police surveillance, the banning of his publications, and his departure for the West. (link)
Here is a document written in 1971 that expresses the depth of Kołakowski's critique of Polish Communism. In this piece Kołakowski published a short but profound critique of Stalinism as a system, "In Stalin's Countries: Theses on Hope and Despair" (link). This short essay appeared in Paris in its Polish version in 1971, and was published in Paris in Politique Aujourd'hui in July-August 1971. The essay is highly valuable as an indication of the nature of the reformers' critiques in Poland of the rigidities of Stalinist Communist systems. It is written clearly and cogently, reflecting Kołakowski's talent as a philosopher and a writer. And it presents the case for the possibility of change in Poland and other Communist dictatorships.

Kołakowski begins his account by rehearsing the reasons that some believe that reform of Soviet-style Communism is impossible:

Stalinism, in the strict sense -- that is, the bloody and cruel tyranny of an individual -- was the most perfect material embodiment of the principles of the system: later transformations, and particularly the considerable relaxation of terrorism as practiced by the government, although important for the security of individuals, have not in any way changed the despotic nature of the regime, any more than they have limited the specifically socialist forms of oppression and exploitation. (2)

But notice the rhetorical strategy that Kołakowski adopts: he presents the extreme views of the most severe critics of the Soviet system first, and offers commentary. And, he notes, the extreme view rules out reform entirely: change control of the economy or information, and you destroy the foundations of communism. Therefore communism cannot be reformed or changed; its despots will never relinquish power over even the most minor issues. But Kołakowski himself does not take this view:

Now, my opinion is that this thesis is not correct, and that to defend it amounts to [adopting] an ideology of defeatism rather than a revolutionary appeal. I base my conviction on four general principles: first, we are never in a position to define in advance the limits of the capacity for change... of any social organization; and experience has not at all demonstrated that the despotic model of socialism is absolutely rigid. Secondly, the rigidity of a system depends in part on the degree to which the men who live within that system are convinced of its rigidity. Thirdly, the thesis which I am challenging is based on an ideology of "all or nothing,' characteristic of men formed in the Marxist tradition; it is not in any way supported by historical experience. Fourthly, bureaucratic socialist despotism is pervaded by contradictory tendencies which it is incapable of bringing into any synthesis and which ineluctably weaken its coherence. (7-8)

Kołakowski's optimism concerning the possibility for change within "despotic socialism" (but, one might reasonably argue, within Franco fascism as well) is the willingness of individuals and groups to think and act differently from their prescribed roles. Individuals can resist in a variety of ways, and their resistance, in a long and slow tempo, can lead to profound change.

This is why resistance to oppression and exploitation -- within the system of Soviet despotism -- takes place in the worst social conditions. No class of exploiters in history has ever had such extensive power at its disposal. But if this concentration of power is a source of strength, it also conceals weaknesses, as the whole post-Stalinist history of communism testifies. (9)

If I speak of a reformist orientation, it is in the sense of a faith in the possibility of effective pressures that are partial and progressive, exerted in a long-term perspective, that is, the perspective of social and national liberation. Despotic socialism is not an absolutely rigid system; such systems do not exist. (16)

What system does Kołakowski himself favor? It appears to be a form of democratic socialism, rather than either despotic socialism or liberal capitalism:

It is probable that, if they had the freedom to choose, the majority of the Polish working class and intelligentsia would opt for socialism, as would the author of this article. For socialism -- that is to say for a sovereign national system which involves control by society over the utilization and development of the means of production and over the distribution of the national income, as well as over the political and administrative organization, working as an organ of society, and not as the master which rules over society in the guise of "serving" it. (18)

This paragraph entails democratic socialism as the favored ideal (not liberal capitalism), because it places the people in control of economy and government. And it rules out the arbitrary and despotic use of power that was universal in Poland, the USSR, and the rest of the Soviet bloc.

Kołakowski also has a view about the future of the Soviet bloc (as of 1971):

In spite of the military power of the Soviet empire, and in spite of the invasion of Czechoslovakia, the centrifugal tendencies within the "bloc" cannot be contained, and the corrosion of nationalism will continue to erode a structure which has lost the cement of ideology. (19)

His essay ends with a call for a free Poland:

Our own dignity entitles us to proclaim aloud the old words: "liberty," "justice" and "Poland". (20)

This essay was written in 1971, only three years after the March 1968 protests in Warsaw that led to Kołakowski's and Bauman's expulsion from Poland. But notice as well: it was written only about a decade before the rise, and eventual success, of the Solidarity movement in Gdansk and other Polish cities, leading ultimately to the fall of Communist government in Poland. And the centrifugal tendencies that Kołakowski describes within the Soviet bloc led eventually to the collapse of despotic socialism throughout Eastern Europe. So in many ways Kołakowski was pretty close to the truth about the coming several decades in Poland and Eastern Europe. What he did not anticipate is the next chapter: the turn to nationalistic, far-right government in Poland, Hungary, and other former-Soviet bloc nations. But, as Hegel said, "the Owl of Minerva spreads its wings only with the coming of the dusk." (Here is a very brief description of Alain Touraine's 1981 research in Gdansk on the Solidarity movement (link), and his account of the pathways through which worker non-violent resistance resulted in fundamental change in Poland.)

As I attempted to do in the case of Zygmunt Bauman, it is intriguing to ask how history, life experience, and academic influences combined to create the intellectual world of Leszek Kołakowski. Much of Kołakowski's work was focused on the history of philosophy, the meaning of religion, and the ideology and deficiencies of Marxism. (His greatest book is his three-volume work, Main Currents of Marxism: The Founders - The Golden Age - The Breakdown.) Is there any evidence in his academic work of the imprint of the experience of war, genocide, murder, and authoritarian rule? His decades-long engagement with the topic of Soviet-style dictatorship plainly reflects his own experience as a brilliant Polish intellectual in the post-War period and high-ranking Communist Party member. He understood the nature of Soviet-style authoritarianism. But -- like Bauman -- there is little in his work that involves deep reflection on Nazism, genocide, anti-Semitism, ordinary evil-doers, and the use of terror by totalitarian states to achieve their ends. (Here he stands in contrast to Alexandr Solzhenitsyn.) And yet Poland stands at the heart of the Bloodlands described so vividly by Tim Snyder. So we seem to confront a puzzle: why were both these brilliant intellectuals, both leading professors in the Polish academy, both children of the 1920s -- why were they both somehow reluctant to reflect on the horrors confronted by Polish Jews from 1939 to 1945?