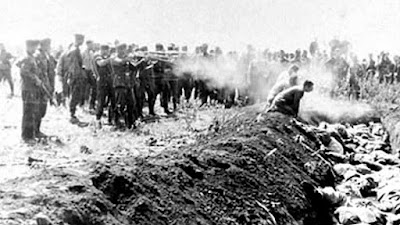 It is challenging to form a mental picture of the significance and reality of the events and enormity of the Holocaust. Many of the summary facts that we "know" about the Nazi plan for extermination of the Jewish people are both inadequate to capture the human meaning of this period, and misleading or inaccurate, as Tim Snyder argues (Black Earth: The Holocaust as History and Warning). How can we gain a better and more personal understanding of these horrible events from the 1940s?

First-person accounts and oral histories represent one form of access to the realities of the mass killings that occurred across Europe, and especially in Eastern Europe. But an especially powerful recent book takes a somewhat different approach. This is Wendy Lower's The Ravine: A Family, a Photograph, a Holocaust Massacre Revealed, a book that proceeds from a single photograph of a single instant of brutality and murder, and helps the reader develop an extensive understanding of the human realities that led to this moment. The photograph is taken in the midst of a mass killing outside the town of Miropol in the Ukraine in October, 1941. The Jews of Miropol were forced to walk into the forest, were gathered at a previously prepared shooting pit, and were murdered by rifle fire. The photograph is unusual in that it is at close range and captures identifiable faces of both the murderers (two German soldiers and two Ukrainian militiamen) and the victim, a mother holding a child by the hand as she is shot. Lower wants to understand the photograph in detail, and to learn the identities of the individuals involved.

Lower combines the skills of an experienced historian, a resourceful crime investigator, and a compassionate observer of family tragedy in a time of mass killing. Her goal is ambitious: she would like to uncover the identity of the victims in the photograph, the killers, the photographer, and the possibility of holding the responsible persons to account in the present. And she accomplishes much of this set of goals. She gains a great deal of detailed knowledge about the Ukrainian and German personnel who were present. She forms an educated guess about the family identity of the victims in the photograph. And she learns a great deal about the photographer. Along the way she provides enough detail about the context of German military and Final Solution activity in 1941 to give the reader a fairly good idea about how this event relates to the larger orchestrated Aktions against the Jews of Eastern Europe from 1941 to 1944 -- the bulk of the killing during the Holocaust.

Miropol was a small town in occupied Ukraine in the fall of 1941. It is some 220 kilometers west of Kiev, the site of the massacre at Babi Yar in September 1941. In Miropol in October several hundred Jewish men, women, and children were exterminated by gunfire. This is the Aktion recorded in the photograph at the center of The Ravine. In Kiev only a few weeks earlier, the largest massacre of Jews in the Holocaust in the occupied Ukraine and Soviet territories occurred, involving the murder over a few days of over 34,000 human beings. In 1943 the Nazis made an effort to conceal the evidence of the massacre, and the Soviets concealed the fact that the victims were Jewish, preferring instead to refer to "Soviet civilians". No memorial was created for the Jewish dead at Babi Yar until 1991, fifty years after the massacre. There appears to be no memorial for the Jewish dead at Miropol; the handful of photographs by Škrovina alone serve as memorial. But The Ravine represents a different kind of memorial. The reader comes away with a sober and human recognition of these many hundreds of innocent victims of murder, and the lives that were stolen from them.
Lower begins with this particular photograph -- a photograph of several German soldiers and Ukrainian militia men in the act of shooting a Jewish mother holding a child at the edge of a burial pit. It is a haunting photograph. But Lower goes much beyond this particular photo, including archival evidence, more photographs, interviews with witnesses and participants, and records from both Nazi and Soviet sources. She is a resourceful, talented, and determined researcher, and her ability to unearth many of the details of this atrocity is continually surprising. She brings the skills and concentration of a forensic investigator to her work.
Especially interesting is Lower's treatment of the role of photographs in this kind of investigation. She is very clear that photography is purposive and intentional. It is not generally a "flat representation of what occurred"; instead, the photographer has a story he or she in interested in discovering and telling. So photography is creative and "subjective". And this proves to be true of the photographer of this particular image, a Slovak named Lubomir Škrovina, who had a narrative he was recording through a series of exposures. But at the same time, photographs prove to be a source of remarkable insight into the human realities of the moment captured in the negative -- details that were invisible to the photographer. And Škrovina himself turns out to be different from how he first appears. Initially Lower takes him to be an accomplice or collaborator, but eventually discovers that he was a dissident and a supporter of the Slovak resistance movement, and was interested in recording the atrocities he witnesses under German occupation for the outside world. Lower writes of Škrovina as a moral human being and his subsequent actions during and after the war:
But being there certainly shaped his subsequent choices and the risks he undertook, which affected him and his family. He refused to stay on the front, feigned illness, spent months in a nerve clinic, then resumed contact with Jews in his town, including sheltering some in the attic of his family home. He helped Dr. Gotthilf secure a place in the forest with his comrades in the Slovak National Resistance, although Škrovina ultimately could not save him or his wife and child. Škrovina was antifascist and anti-Soviet. He had felt no pride wearing any government-issued uniform. He hated the war. (91)
Several specific and important insights emerge from Lower's narrative. First is the importance of doing what we can to recognize and remember the individuals and families who were extinguished there. Lower's point about the killing of families is especially poignant: fathers, mothers, aunts, uncles, cousins, sons, and daughters, all destroyed. Second is the important reminder that Nazi violence was carried out by its allies in occupied countries -- Poland, Lithuania, Ukraine -- and that these armed groups and police units were merciless and remorseless towards their Jewish neighbors. What Lower uncovers at Miropol is a microcosm of Babi Yar.
Theodor Adorno once said that “To write poetry after Auschwitz is barbaric." But here is a good reason not to agree with Adorno. Consider the beautiful, sorrowful, and indicting poem written by Yevgeny Yevtushenko in 1961, Babi Yar. Yevtushenko helps us to mourn and recognize these children, women, and men who were murdered at Babi Yar. And he points a finger of accusation against the continuing anti-Semitism rampant in the Soviet Union in which he lived. Wendy Lower's book is not poetry, but it is just as eloquent in its evocation of the human realities of this tragic moment in Miropol, and in the great expanse of the bloodlands of Eastern Europe.
BABI YAR
Yevgeny Yevtushenko

No monument stands over Babi Yar.
A drop sheer as a crude gravestone.
I am afraid.
Today I am as old in years
as all the Jewish people.
Now I seem to be
a Jew.
Here I plod through ancient Egypt.
Here I perish crucified on the cross,
and to this day I bear the scars of nails.
I seem to be
Dreyfus.
The Philistine
is both informer and judge.
I am behind bars.
Beset on every side.
Hounded,
spat on,
slandered.

Squealing, dainty ladies in flounced Brussels lace
stick their parasols into my face.
I seem to be then
a young boy in Byelostok.
Blood runs, spilling over the floors.
The barroom rabble-rousers
give off a stench of vodka and onion.
A boot kicks me aside, helpless.
In vain I plead with these pogrom bullies.
While they jeer and shout,
'Beat the Yids. Save Russia!'
Some grain-marketer beats up my mother.

O my Russian people!
I know
you
are international to the core.
But those with unclean hands
have often made a jingle of your purest name.
I know the goodness of my land.
How vile these antisemites—
without a qualm
they pompously called themselves
the Union of the Russian People!

I seem to be
Anne Frank
transparent
as a branch in April.
And I love.
And have no need of phrases.
My need
is that we gaze into each other.
How little we can see
or smell!
We are denied the leaves,
we are denied the sky.
Yet we can do so much—
tenderly
embrace each other in a darkened room.
They're coming here?
Be not afraid. Those are the booming
sounds of spring:
spring is coming here.
Come then to me.
Quick, give me your lips.
Are they smashing down the door?
No, it's the ice breaking . . .
The wild grasses rustle over Babi Yar.
The trees look ominous,
like judges.
Here all things scream silently,
and, baring my head,
slowly I feel myself
turning grey.
And I myself
am one massive, soundless scream
above the thousand thousand buried here.
I am
each old man
here shot dead.
I am
every child
here shot dead.
Nothing in me
shall ever forget!
The 'Internationale,' let it
thunder
when the last antisemite on earth
is buried for ever.
In my blood there is no Jewish blood.
In their callous rage, all antisemites
must hate me now as a Jew.
For that reason
I am a true Russian!
Posted by Dan Little at 11:24 AM