Frankl and Shalamov on existence in the camps 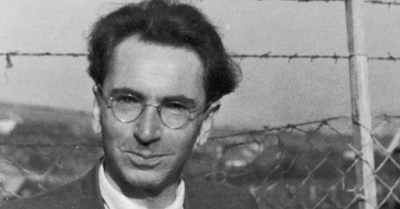 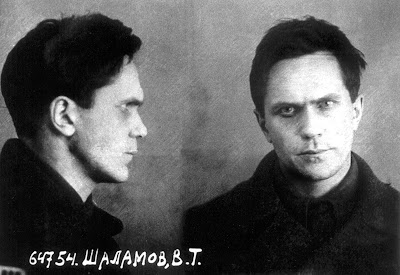 Image: Varlam Shalamov, NKVD photo
Viktor Frankl, born in Austria in 1905, had the tragic misfortune to be swept up into the maelstrom of the Final Solution. He was an impactful psychotherapist, both before and after the war, and he invented the field of logotherapy. His experience in Auschwitz and other Nazi camps had a deep impact on his view of the human being's emotional life. He expressed some of his Auschwitz experience -- initially anonymously -- in Man's Search for Meaning.
Varlam Shalamov was born in 1907 in Vologda, Russia. He supported the Russian Revolution, but sided with Trotsky rather than Stalin. He became a victim of Stalin's purges and spent 1937-1951 as a political prisoner -- a zek -- in various Kolyma slave-labor camps, the harshest part of the Gulag. After his release in 1951, and following another two years in Kolyma as a non-prisoner medical assistant, he began writing a series of stories capturing the experience of the slave labor camps of Kolyma. These writings were initially circulated as samizdat, then published abroad in translation in 1966, and finally published in Russian in 1978. Many of those stories are collected in Kolyma Stories, and they provide stark, unadorned still-life images of moments of cruelty and almost unendurable hardship in the camps in the far north, from the point of view of a long-serving zek.

Frankl's account of life in Auschwitz is detailed and grueling. He describes arrival at Auschwitz, labor, food, starvation, the cold, beatings by the guards, and severe physical suffering. Laconically he reports that of the 1500 prisoners in the train that brought him to Auschwitz, 90% were immediately consigned to the gas chambers. And he speaks honestly about the dehumanization created by existence in a death camp.

On the average, only those prisoners could keep alive who, after years of trekking from camp to camp, had lost all scruples in their fight for existence; they were prepared to use every means, honest and otherwise, even brutal force, theft, and betrayal of their friends, in order to save themselves. We who have come back, by the aid of many lucky chances or miracles--whatever one may choose to call them--we know: the best of us did not return. (19)

But this is not Frankl's last word on dehumanization. He returns to the question late in the memoir, and finds that this descent into a brutish, dehumanized fight for existence was not universal. Rather, Frankl finds room for optimism about the capacity that human beings have for courage and for maintaining their ability to choose their responses to suffering.

It is worthwhile comparing Frankl's descriptions with "lessons learned" by Shalamov in his years of forced labor in the prison camps of the Gulag. In his introduction to Kolyma Stories Donald Rayfield quotes a fragmentary text from 1961 in which Shalamov describes "what I saw and understood in the camps". With these 45 terse observations Shalamov provides his most explicit statement about what the experience of Kolyma was for him.

1 The extreme fragility of human culture, civilization. A man becomes a beast in three weeks, given heavy labor, cold, hunger, and beatings.

3 I realized that friendship, comradeship, would never arise in really difficult, life-threatening conditions. Friendship arises in difficult but bearable conditions (in the hospital, but not at the pit face).

15 I realized that one can live on anger.

16 I realized that one can live on indifference.

17 I understood why people do not live on hope—there isn’t any hope. Nor can they survive by means of free will—what free will is there? They live by instinct, a feeling of self-preservation, on the same basis as a tree, a stone, an animal.

31 I am convinced that the camps—all of them—are a negative school; you can’t even spend an hour in one without being depraved. The camps never gave, and never could give, anyone anything positive. The camps act by depraving everyone, prisoners and free-contract workers alike.