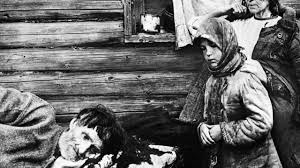 It is evident that human beings create evil; but human beings are often driven and dominated by totalitarian ideologies that make great evils possible.

One of those ideologies of the last century was Stalinism — the view that the success of Soviet Communism is the highest good; any sacrifice is justified; those who stand in the way must be destroyed; and those whose sacrifice may aid the achievement of Communism shall be sacrificed as well. This is the central insight of Koestler's Darkness at Noon. Koestler revealed the moral "logic" of the Moscow Show Trials through his account of the interrogation and trial of the loyal revolutionary functionary Rubashov, and the twisted logic of confession, guilt, lies, and sacrifice that Rubashov's interrogation involved.

We now know that Stalin was a master political criminal, focused on extending and maintaining absolute power and using violence and terror to extend his power. But what about his predecessors, Lenin and Trotsky? The judgment of history indicts both leaders. In his very good book Humanity on the origins of evil, Jonathan Glover argues that Stalin's views extend back to Lenin and Trotsky as well, and long before the success of the Bolshevik Revolution:

There was indifference to the individual people who might be destroyed by the new policies. This view came from Lenin, who had written in 1908 that the Paris Commune had failed because of the ‘excessive generosity’ of the proletariat, who ‘should have exterminated its enemies’ instead of trying ‘to exert moral influence on them’. In 1917, when Lenin opposed the abolition of capital punishment for deserters at the front, Trotsky quoted him as saying, ‘Nonsense, how can you make a revolution without executions? ... It is a mistake, impermissible weakness, pacifist illusion, and so on.’ (255)
Glover's central insight is that propaganda and faith in an ideology drive atrocity. He argues that much of the propaganda, language, and behavior of the Soviet state were based on systematic lies, designed to destroy the moral instincts of ordinary Soviet citizens. He highlights the use by Soviet propagandists of fundamentally dehumanizing terms used for the "enemies" of socialism: “parasites”, “filthy dogs”, “reptiles”, and “kulaks”. This is a kind of moral education — creation of “new Soviet Man”, and cultivation of a willingness to countenance the humiliation and murder of the "enemy". It is important to register the exact parallel between these words and Nazi propaganda and behavior.
Glover makes it plain that lies are the tools of totalitarianism, and a commitment to trying to see and express the truth is one of the “moral resources” that constitutes and defends our humanity.
So what about the lies? Here is an important example. New York Times journalist Walter Duranty was an apologist for Stalin during the 1930s and an influential thought-leader about the Soviet Union in the United States as well. And, shamefully, Duranty obscured and justified Stalin's massive crimes to a broad public in the United States through his position at the New York Times. In 1932 Duranty published a poem called ‘Red Square’ in the New York Times, which included the lines:

Russians may be hungry and short of clothes and comfort
But you can’t make an omelette without breaking eggs.

"You can't make an omelette without breaking eggs" .... This phrase is fundamentally odious and dehumanizing. It subsumes in a few words the moral reversal represented by totalitarianism: rather than society existing for the freedom and wellbeing of the citizens, the citizens exist as raw materials for the success of the state. And indeed, the phrase was to be used frequently by Stalin’s supporters and eventually those of the Great Navigator, Chairman Mao.
Vasily Grossman captures each aspect of these features of Stalinist totalitarianism in his last major novel, Everything Flows (1961), and this novel is more explicit and damning about the Gulag and Stalin's other crimes than would have been thought possible during Stalin's life. The novel captures the situation of ordinary Soviet citizens faced with moral dilemmas and difficult choices between complicity, ideological conviction, personal self-interest, honest recognition of the facts, and shame. Here are the reflections of the comfortable scientist, Nikolay Andreyevich:

He remembered how in 1937, at a meeting called in connection with the Moscow Trials, he had voted in favor of the death penalty for Rykov and Bukharin. He had not thought about those meetings for seventeen years....
But now—now Nikolay Andreyevich remembered that there had been doubt; his certainty of Bukharin’s guilt had been a pretense. ...

He believed, after all, that a socialist society, a society without private property, had been constructed for the first time in history, and that socialism required the dictatorship of the State. ...

Could this really be socialism—with the labor camps of Kolyma, with the horrors of collectivization, with the cannibalism and the millions of deaths during the famine? Yes, there were times when a very different understanding had found its way into the borderlands of his consciousness: that the Terror really had been very inhuman, that the sufferings of the workers and peasants had been very great indeed. (29-33)
Aleksandr Solzhenitsyn describes the psychology of ordinary people under Stalinist totalitarianism in similar terms:
The mildest and at the same time the most widespread form of betrayal was not to do anything bad directly, but just not to notice the doomed person next to one, not to help him, to turn away one’s face, to shrink back. They had arrested a neighbour, your comrade at work, or even your close friend. You kept silence. You acted as if you had not noticed. Gulag, 25
There are two key insights here. First, "totalizing" ideologies that persuade ordinary human beings of the supreme moral importance of the state are prolific catalysts to great evil. "True believers" are willing to do atrocious things to their fellow human beings -- especially when their own careers and wellbeing depend upon it. And second is the crucial importance of revealing the truth about atrocities. In that light, Timothy Snyder's recent post on Documenting Ukraine is important and timely. Russia's current atrocities in Ukraine -- deliberate, cruel, and deadly -- are inexcusable. And, as Snyder argues, it is essential to document these actions of state against innocent civilians. History must judge Vladimir Putin and his fellow Russian rulers for the atrocities they have ordered and executed.
Posted by Dan Little at 2:15 PM