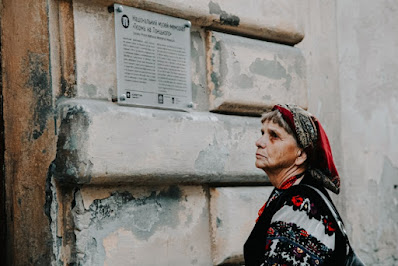 In light of the horrific information now available about atrocities committed in Ukraine by occupying Russian forces in towns such as Bucha -- rape, torture, summary execution, as well as mass deportations to "filtration camps" -- it is grimly important to recognize that there was a prior period of fantastic brutality and atrocity committed by Russians against Ukraine over eighty years ago. The NKVD -- the secret police of the Soviet Union and Stalin's reliable enforcers of murder and mayhem -- carried out mass executions of tens of thousands of prisoners in prisons in western Ukraine in June 1941. At least 70% of these victims were Ukrainians, with 20% estimated to be Poles and the remainder Jews and other nationalities (Kiebuzinski and Motyl 28). The bulk of these prisoners were accused of political crimes or nationalist "anti-Soviet conspiracies". These were prisoners whom the Soviet authorities took to be a threat to Soviet rule. These massacres were comparable in magnitude and ferocity to the executions of Polish prisoners of war and other members of the Polish elite undertaken by the NKVD in April 1940 in Katyn Forest and other locations. They were unforgivable crimes of war against innocent and unarmed people.

Surprisingly, the NKVD prison massacres have not been very extensively documented or noted until the past decade. One exception is John-Paul Himka, who takes note of the NKVD massacre of thousands of political prisoners in three prisons in Lviv in June 1941 in his article "The Lviv Pogrom of 1941: The Germans, Ukrainian Nationalists, and the Carnival Crowd" (2011 link):

The pogrom in Lviv occurred against the background of the proclamation of a Ukrainian state in that city on the first day of the German occupation, a subject to which we shall return. The other important contextual circumstance of the Lviv pogrom of 1941 was the discovery of thousands of decomposing corpses of political prisoners who had been murdered by the NKVD in the days previous, as the Soviets realized that the Germans were advancing too rapidly for them to evacuate the prisons. The stench of bodies emanated from the prisons, which were on fire when the Germans arrived on Monday 30 June. Many Ukrainian nationalists were among the victims. The Germans had the corpses retrieved, by Jews, and laid out for public display. Relatives of the prisoners searched among the bodies, looking for their loved ones. The bodies were found in three prisons: the Zamarstyniv street prison; the Brygidki prison; and the prison on Lontskoho. (Himka 2011: 210-211)

The history of the Lontsky St. prison during the Second World War is a brutal, tangled tale that this study will seek to clarify in order to show how the current museum presents a one-sided, politically motivated version of what transpired on its site. In brief, Lviv, and with it the prison, came under Soviet rule from September 1939 until June 1941. In addition to severe maltreatment of prisoners at Lontsky St. and at other prisons in Lviv, a maltreatment that was typical enough of Stalinist incarceration, the Soviets ended their control of the prisons in June 1941 with a horrific crime. Unable to evacuate the prisoners fast enough after the German attack on the Soviet Union on June 22, the NKVD prison administration murdered the political prisoners to prevent their cooperation with the German enemy. As the posters in the museum inform visitors, in the last days of June 1941, the Soviets killed 1,681 prisoners at the Lontsky St. prison, 971 in the prison on Zamarstyniv St., and 739 in the Brygidki prison in Lviv. These killings, known as the NKVD murders, are the primary focus of the memorial museum today. (Himka 2015: 137-138)

But these references provide little detail or context of the broader massacre that occurred in many sites across western Ukraine. Soviet and Russian secrecy -- especially about the criminal activities of the NKVD and its successors -- has worked hard to conceal the human realities of these crimes. 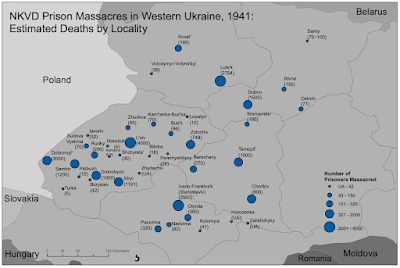 Some of the obscurity of this period of murder by the NKVD came to an end in 2017 with the publication of The Great West Ukrainian Prison Massacre of 1941 by Ksenya Kiebuzinski and Alexander Motyl, family members and descendants of victims of this series of massacres. The volume is primarily a collection of documents that will permit other researchers to investigate the events more fully.

The editors note that Ukraine suffered enormously at the hands of Russians during the first half of the twentieth century:

According to a study published by the Moscow-based Institute of Demography, Ukraine suffered close to 15 million ‘excess deaths’ between 1914 and 1948. Of that number, about 7.5 million were attributable to Soviet policies and 6.5 million to Nazi policies. According to Nicolas Werth, meanwhile, the Stalinist regime killed some 12 million of its people. When we consider that over half of them were Ukrainian (far in excess of Ukrainians’ share of the total Soviet population), it is hard not to register outrage at this monstrous system’s hostility to its people in general and Ukrainians in particular. (Kiebuzinski and Motyl 2017: 27)

The volume provides a brief history of the events in an extensive introduction, but its primary goal is to provide archival materials that will permit other scholars to discover more of the details of this organized and deliberate slaughter. The planned purposiveness and cruelty of the slaughter is evident in the record:

The Massacre was not a spontaneous action by the retreating Red Army and NKVD, but, as numerous official documents attest, had been coordinated and planned by Soviet authorities. Especially striking is the fact that many prisoners were, as their obviously mutilated bodies suggested, viciously tortured before they were killed. (31)

And -- like Russian military atrocities today in Bucha and elsewhere in Ukraine today -- the victims of torture and murder of the great Massacre were immediately visible as the Red Army retreated:

No less important than the number of dead is that they were discovered within the space of little more than one week, in a single sustained, relentless wave. Every time the Soviets evacuated and/or the Germans entered a city or town, heaps of rotting corpses were found in prisons, ditches, or rivers. And since this was the height of summer, memoirists and eyewitnesses invariably mention the unbearable stench. (42)

In addition to wholesale murder, the NKVD organized mass deportations from the territories it seized following Germany's invasion of Poland, in order to incorporate the territories into the USSR without popular opposition.

Fearful of national, anti-Soviet elements and an educated class in the new lands, and of their potential influence on Ukrainians to the east, the NKVD entered the territory in force. Mass arrests and deportations of formerly Polish citizens ensued, targeting first Poles and Jews, and then Ukrainians. (37)
The authors estimate at least one million deportations from these occupied territories (38). Again -- there are reports of largescale deportations of Ukrainian people from eastern Ukraine today by Russian military and political forces.
Both Himka and Kiebuzinski and Motyl draw a connection between the NKVD atrocities and the surge of Ukrainian anti-Semitic violence and murder in 1941. German propaganda linking Communism and the Jewish populations of Poland, Ukraine, and the Baltic states -- the myth of "Judeo-Bolshevism" conveyed by Hitler and the Nazi propaganda machine -- played into the trauma of NKVD atrocities in Poland and western Ukraine, perhaps fueling pogroms (as in Lviv) and collaboration with Nazi extermination units. Indeed, in his review of Kiebuzinski and Motyl Thomas Chopard (link) takes the editors to task for their overly forgiving treatment of Ukrainian nationalism (OUN) and its anti-Semitic foundations:
On retrouve en filigrane la disculpation des mouvements nationalistes ukrainiens quant à leur antisémitisme ou leur participation aux violences antisémites, portée par le narratif ukrainien nationaliste contemporain. Ainsi qu’une ethnicisation à marche forcée des acteurs (des victimes comme des bourreaux), déjà à l’œuvre dans le discours nationaliste des années 1940. Les pogromistes sont renvoyés à leur individualité, masse indistincte et indocile. (Chopard, 710)
Explaining the Holocaust is hard enough, and assigning responsibility for mass murder, collaboration, and pogrom is an important ongoing task for the historian. But the prison massacres conducted by the NKVD in 1940 in western Ukraine -- as well as the atrocious massacres in Katyn Forest in the prior year in Poland -- must be recognized, investigated, and accounted for. And most importantly -- nothing like them can be allowed to occur again. And yet here is a very specific reason to focus on those days in 1941 today. The rapes, torture, mutilations, and murder of the innocent that have been documented in Bucha today (link) are very similar in their horror to those atrocities that occurred at the orders of another Russian (Soviet) government in 1940 and 1941.
It is tempting to ask whether local memories, passed down in communities and families, of these unspeakable crimes by Russians against Ukrainians in 1941 -- as well as memories of the Stalinist war of hunger against Ukraine in 1931-32 -- are an important component of the fierce resistance and courage shown by Ukrainian people throughout the country today.
Posted by Dan Little at 11:42 AM