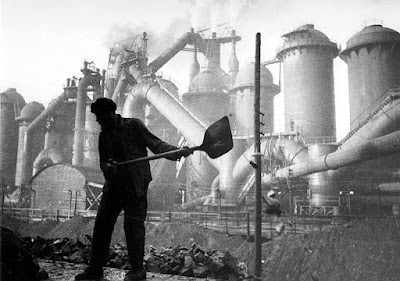 In my book A New Social Ontology of Government (2020) I tried to provide an analytical inventory of the sources of "dysfunctions" in large organizations and government agencies. Why do agencies like FEMA or the NRC so often do such a poor job in carrying out their missions? The book proposed that we can better understand the failures of agencies and corporations based on a "social ontology" of actors and networks of actors within large organizations. The book discusses principal-agent problems, failures of communication across an organization, inconsistent priorities and agendas in sub-agencies within an organization, corruption, and "capture" of the organization's decision-making process by powerful outsiders (industry groups, interest groups, advocacy organizations).

It is very interesting to see a similar analysis by Paul Gregory and Andrei Markevich of the sources of dysfunction and organizational failure in the classic Soviet economic agencies in the 1930s-1950s. Their article "Creating Soviet Industry: The House That Stalin Built" (link) provides a good indication of the limitations of "command" even within a totalitarian dictatorship, and many of the conclusions converge with ideas presented in A New Social Ontology. Stalin's economic agencies and central planning apparatus showed many of the failures identified in other large organizations in the democratic capitalist West.

First, a little background. In the 1930s and 1940s there was an idealized conception of economic organization current in socialist thought (both communist and non-communist) according to which a socialist economy could be rationally and scientifically organized, without the "chaos" of a disorganized capitalist economy. The socialist economy would be vertically organized, with a "chief executive" (boss of bosses) presiding over ministries representing major sectors of the economy and giving commands concerning basic economic factors. The chief executive would set the targets for final outputs of capital goods and consumer goods to be produced. Each ministry would be responsible for production, investment, and labor use for the industries and firms in its sector. The input needs of the overall economy and all sectors and enterprises would be represented in the form of vast input-output tables that capture the interdependency of industries throughout the economy. The professional staff of the chief executive would set final needs for each commodity -- refrigerators, tanks, miles of railway tracks, ... Each industry has "input" requirements for primary goods (steel, coal, labor, metals, machines, ...), and an equilibrium economy requires that the right quantity of final goods and production goods should be calculated and produced to satisfy the needs of each industry as well as final demand. Wassily Leontief proposed a computational solution for this problem in the form of a large multi-sector input-output table -- an NxN model for representing the input-output relationships among N industries. Suppose there are 100 basic industries, and each industry requires some quantity of the inputs provided by every other industry. We can now compute the quantity of iron ore, coal, electricity, and labor needed to produce the desired end products in one time period. The results of the I-O model permit the development of plans and quotas for each industry: how much product they need to produce, and how much raw material and other inputs they will need to consume to complete their quota. Now there is the apparently simple problem of organization and management: bosses, managers, and supervisors are recruited for each industry to implement the sub-plan for the various industries and enterprises, and to ensure that the production process is efficiently organized, waste is minimized, and quotas are reached. Production by each enterprise is managed by plans originating with the central economic ministry. Orders and quotas begin with the central ministry; master plans are broken out into sub-plans for each industry; and each industry is monitored to ensure that it succeeds in assembling its resources into the specified quota of output. And the I-O methodology eliminates waste: it is possible to plan for the amount of steel needed for all producers and the number of refrigerators needed for all consumers, so there is no surplus (or deficit) of steel or refrigerators.

This is a vertical conception of economic organization based on a command theory of organization. It is dependent on determination of final output targets at the top and implementation at the bottom. And it is coordinated by the modeling permitted by Leontief tables or something similar. Resource constraints are incorporated into the system by inspection of the final output targets and the associated levels of raw material inputs: if the total plan including capital goods and consumer goods results in a need for ten times the amount of iron ore or coal available to the nation, then output targets must be reduced, new sources of iron ore and coal (mining) need to be developed, or international trade must make up the deficit. International trade presents a new problem, however: it requires that a surplus of goods be available (consumer goods, capital goods, or raw materials) that can generate currency reserves capable of funding purchases from other countries. This in turn requires readjustment of the overall system of plans.

This description is incomplete in several important aspects. First, this account focuses on quantity rather than quality by setting quotas in terms of total output rather than output at a given level of quality. This means that directors and managers have the option of producing more low-quality steel or bread rather than a smaller quantity of high-quality product. Much as a commercial bakery on Main Street in Fargo can reach market goals by adulterating the bread it produces, so the railway wagon enterprise in Chelyabinsk can substitute inferior inputs in order to achieve output quotas. (Here is a critical assessment of product quality in the late Soviet economy and the last-ditch efforts made by Mikhail Gorbachev to address the issue of quality control; link.) But the problem is systemic: managing to quota does not reward high standards of quality control, and there is no way for consumers to "punish" producers for low-quality products in the system described here because price and demand play no role in the process.

However, there is a more fundamental problem with the vertical description provided here: it makes assumptions about the capacity to implement a command system in a vast network of organizations that is completely impossible to achieve. It is simply not the case that Stalin could decree "10 million toasters needed in 1935"; his ministry of "Small Electrical Appliances" could take this decree and convert it into sub-plans and commands for regional authorities; and plant bosses could convert their directives into working orders, smoothly implemented, by their 1,000 toaster assemblers. Instead, at each juncture we can expect to find conflicting interests, priorities, problems, and accommodations that diverge from the idealized sub-plan delivered by telegram from the Ministry of Small Electrical Appliances. We may find then that firms and sub-ministry offices fail to meet their quotas of toasters; or they lie about production figures; or they build one-slice toasters at lower cost; or they may deliver the correct number of completely useless and non-functional toasters; or they may deliver the toasters commanded, but at the cost of shifting production away from the electric borscht cookers and leave great numbers of Soviet consumers short of their favorite soup. And in fact, these sorts of opportunistic adjustments are exactly what Gregory and Markevich find in their analysis of Soviet archives. So let's turn now to the very interesting analysis these researchers provide of the organizational dysfunctions that can now be detected in Soviet archives.

Here is the approach taken by Gregory and Markevich:

The textbook stereotype has focused on the powerful State Planning Commission (Gosplan) as the allocator of resources, but most actual planning and resource management was carried out by the commissariats and more specifically by their branch administrations (glavk). This study considers the internal workings of the commissariats, rather their dealings with such organizations as Gosplan and the Commissariat of Finance. (789)