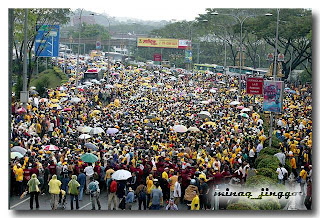 Most nations are at least nominally based on the idea of the legal equality of all citizens. This commitment provides a salient pathway through which even the most disadvantaged groups can pursue their goal of achieving greater equality for themselves and their communities, consistent with the defining values of the nation. Some countries, however, have embodied legal differences among groups of their citizens based on the religion or ethnicity of the person. And in these circumstances, pariah groups have no pathway -- legal or moral -- through which to attempt to create a non-violent pathway towards greater social justice for themselves.

Malaysia is a striking example of the latter circumstance. Its constitution and legal system give fundamental privileges to members of the Malay majority, referred to as "Bumiputra" privilege, and accord more limited rights and opportunities to non-Malay groups (Indian, Chinese, Christian, other). It is a polity based on differential rights for different ethnic and religious groups. Many of the most desirable opportunities in Malaysian society -- in employment, government office, contracting, and education -- are reserved or prioritized for Malays, defined as a racial group. It is hard to see how such a political system, defined on the premise of significant legal and economic inequality across different groups, could be justified to members of the subordinate groups. And, in fact, large street demonstrations in 2007 by the Indian community marked an exceptional indication of the discontent these policies create, and the lack of legitimacy these policies create in the whole population.

The question here is a fairly specific one: how can a polity founded on these sorts of invidious and permanent distinctions among groups of its citizens remain stable? Is it possible to generate any variety of "political legitimacy" across the whole population that contributes to political stability in these circumstances of extreme constitutional inequality among ethnic groups? How can the government maintain its power and ability to govern?

In the case of Malaysia the answer to the question about governing seems to be a combination of institution-rigging, force, and intimidation of the large ethnic populations. The constitution sets the stage with its stipulation of Bumiputra privilege. And electoral and parliamentary rules pretty much guarantee a permanent and large Malay majority in the parliament for parties such as the UMNO. So the political rules entrench the political hegemony of the Malay majority. This means that minority ethnic groups and parties have no hope of gaining progress towards legal equality of rights of citizenship through the legal process.

And this is where force and intimidation come in. It would seem that the strategy of mass demonstration and protest would be a natural recourse for large ethnic groups in Malaysia. But the state has made it clear that it will quickly suppress demonstrations with force -- in fact, the 2007 demonstrations were striking by their rarity in Malaysian public life.

But there is a deeper and more sinister kind of force in the air as well. This is the threat of largescale "race riots" directed against Malaysia's Indian and Chinese communities. The riots of 1969 were vicious and destructive, and they are remembered. The threat of pogrom and ethnic cleansing by Malays against Indian and Chinese Malaysians is not far from the surface and it is taken seriously. Rhetoric by UNMO politicians in speeches before parliament reinforce this sense of threat.

The theoretical questions at issue here can be posed from two angles -- the state and the group. From the state's point of view, the question is whether it is possible to navigate the fundamental conflict of interest that is created between Malays and the rest of Malaysian society through some combination of minor accommodation and the threat of repression. Can a consensus politics, backed by the perennial threat of force, emerge from this kind of fundamental inequality across groups? From the point of view of the large Indian or Chinese Malaysian populations, the question is whether there are tactics of collective action and popular mobilization that might allow them to pursue their demands of social and political equality effectively. Can they turn the tables on the Malay government? Can they gradually create the conditions in which the Malaysian state is compelled to accept the fundamental premises of a just civil society -- equality of all citizens and free rights of political participation for all?

Here is a link to an independent Malaysian news source that many Malaysians have confidence in.
Posted by Dan Little at 1:39 PM