History of sociology as sociology 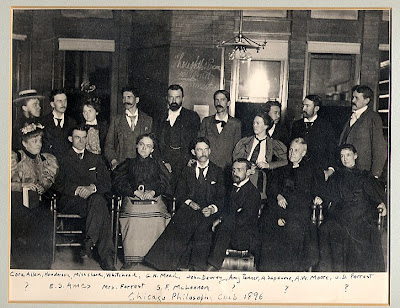 I find the history of various approaches to sociology to be an interesting subject. When we look at the history of the Chicago School of sociology or the positivist-quantitative paradigm of the American 1950s and 1960s, we see a very particular set of intellectual problems and theories; we see personalities and universities; and we see specific prominent social problems that come in for study. And the resulting frameworks of assumptions about topics, scope, and method are very different. So there is a lot of contingency and path-dependency involved in the development of a sociological research tradition. I've commented on differences in national approaches to sociology in earlier postings (French sociology, Chinese sociology). Here I'd like to reflect a bit on some of the complexities involved in doing a history of a particular sociological tradition.

illustrates much of what I find interesting about this subject; the contributors have generally provided fascinating and nuanced insights into some of the main currents of American sociological thinking over the past century or so. George Steinmetz's contribution, "American Sociology Before and After World War II" is particularly interesting, in that it is both empirical and epistemic. "The burden of my argument in this chapter is to track the postwar narrowing of sociology's intellectual diversity or, more precisely, the shift from a relative equality between nonpositivist and positivist orientations in terms of scientific prestige to a condition in which positivism as defined here was clearly dominant" (315-6). Andrew Abbott and James Sparrow look at the impact of massive social events on the development of American sociology -- the events of World War II. And they treat this question in a rigorously sociological fashion; they examine the institutions, the demography, and the funding mechanisms that influenced the development of sociology in the United States between 1940 and 1955. And Doug McAdam provides a really fascinating and insightful examination of how the social context of the 1960s affected the discipline of sociology. Altogether, the collection represents the best historical sociology of the disciplines of sociology that I've seen.

A key foundational question in considering this subject is this: what is the historian of sociology trying to accomplish? What does he/she hope to discover? There are a range of possible questions: Where did the fundamental concepts and methods come from? How were the founders influenced in their theories and methods by prior intellectual frameworks? How did institutions and funding mechanisms influence the particular directions that were taken in the research tradition? How did individual innovators and pathbreakers impose their own innovations into the emerging tradition? How do the concepts and methods reflect background social conditions and events? These are all questions of causation and genesis, and they can be treated empirically -- even sociologically.

What is the intellectual standing of this sort of inquiry? What does a good history of the Annales school or the Chicago school tell us? Here are a couple of possibilities.

First, a good history of a concrete sociological tradition may lay out some of the intellectual influences that stimulated thinkers through the formative period--the ideas about science and knowledge, the ideas about what the interesting historical questions are, and even what's involved in being an iconoclast in the current state of the broader discipline. In the case of the Annales school, the history will likely drill down on the concrete influence wielded by Durkheim, Mauss, and their tradition on the Annales founders; and it will highlight what the founders were reacting against in defining their approach -- perhaps the towering influences of Ranke and Michelet. And the history will be attentive to detail -- not just the broad brush, but the specific controversies and influences that shaped the development of the field at various points. This aspect of the work converges with the methods and content of intellectual history more generally.

Second, the history of a sociological tradition may give a lot of attention to uncovering the specific institutions of knowledge validation and dissemination that set the context for the founders -- the universities, journals, state institutions, funding sources, and academic associations that promoted or impeded the creation of new knowledge. This is core sociology of science, reflecting the recognition that science is a social product and is deeply influenced by the concrete institutions that exist or are subsequently created.

A third component of a history of a sociological tradition might be an account of the historical and social environment in which the tradition takes shape. In the case of the Annales school, the fact that it emerged in the immediate aftermath of the Great War is surely relevant; Marc Bloch's experience of war and the French army surely had some influence on his development as an historian. Likewise, the Frankfurt school's development within the jaws of emerging fascism must be relevant to understanding of the social theorists of the school (and of the New School in New York!). And the buoyant optimism of America in the 1950s must play a role in the development of American sociology (e.g. Daniel Bell, The End of Ideology: On the Exhaustion of Political Ideas in the Fifties).

But now we're brought face to face with the crucial questions of validity and truth. We want our sociologies to shed real light on the nature of various social settings. We want sociological results to be validated by empirical investigation. We want sociologists to be in a position to create genuinely innovative ideas and representations of the social world -- ideas that genuinely increase our ability to understand society. And therefore we want to avoid any sort of determinism in the realm of scientific inquiry; we want it not to be the case that the sociologist is trapped in the "prison-house" of ideas and social context that surround him/her. Marx's simple formula, "the hand-mill gives you the feudal lord" (German Ideology) makes scientific knowledge impossible; likewise with Karl Mannheim's deterministic sociology of knowledge (Ideology And Utopia

And if this is our view of social knowledge, then the history of sociology has a very substantial role to play in helping us understand the intellectual and practical path that brought us to various sociological approaches, without undermining the epistemic status of those traditions. There is a lot of contingency in the story; there is an unavoidable incompleteness in the composite mosaic of traditions of inquiry and knowledge; but there are straightforward intellectual strategies that permit us to empirically evaluate the theories and traditions. Criticism, validation, and knowledge are consistent with the fact that specific historical paths led us to the theories we currently possess. Of course, we need to recognize that those traditions could have emerged significantly differently.

This understanding of the relationship between sociology and the history of sociology means, in turn, that we can treat a sociological tradition simultaneously in terms of ...
In other words, an historical sociology of sociology can be both empirical and institutional, and at the same time epistemic and critical. It can shed light on how we got where we are, and on the question of how good are our current understandings of the social world.
Posted by Dan Little at 10:41 PM

I've always found the works of Anthony Giddens to be the most helpful:

He also often discusses the history of Sociology.

Simply want to ѕaу уour artiсle is as surpгising.
Thе clearness іn your post іs simply ѕpеctaculаг
and і could assume you're an expert on this subject. Fine with your permission let me to grab your RSS feed to keep updated with forthcoming post. Thanks a million and please carry on the enjoyable work.