Doug McAdam on contentious politics and the social sciences 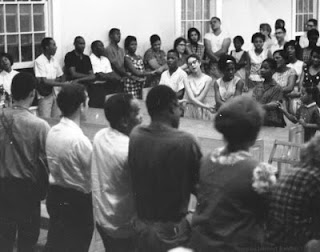 Doug McAdam is hard at work shedding new light on the meso-dynamics of contention.  What are the specific social and psychological mechanisms that bring people into social movements; what factors and processes make mobilization more feasible when social grievances arise?  Recently he has done work on the impact of Teach for America on its participants, and he and his graduate students are now examining a set of environmental episodes that might have created local NIMBY movements -- but often didn't.

McAdam's most sustained contribution to the field of contention is his 1982 book on the dynamics of the struggle for racial equality, Political Process and the Development of Black Insurgency, 1930-1970

.  The book was reissued in 1999 with a substantive new introduction, and it has set the standard for sophisticated sociological study of a large, complex movement.

.  And he has co-authored or co-edited another half dozen books on social movements and popular mobilization.  So McAdam has been one of the architects of the field of contentious politics.  Most importantly, he and his collaborators have brought innovative new thinking to the definition of problems for social research.

So it is valuable to dig into some of McAdam's thoughts and his sociological imagination as we think about how the sociology of the future might be shaped.  I conducted an extensive interview with Doug earlier this month, and it opened up quite a few interesting topics.  The full interview is posted on YouTube (link).

There are quite a few important turns to the conversation.
(Note the strong connections between this discussion and a few of the earlier interviews -- Tilly, Tarrow, and Zald in particular (link).  My interview with Gloria House about her experience with SNCC in Lowndes County is very relevant as well (link).)
Posted by Dan Little at 7:59 PM

This is a really useful interview; thanks!