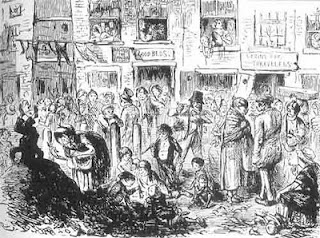 A city is a complex social agglomeration, and all too often it represents a concentration of social ills that are very difficult to eradicate.  Poverty, violence, and poor public health are three social problems that seem to be almost synonymous with "urban."  We might ask two rather different sorts of questions about these facts.  One is "Why so?", and the other is, "Under what circumstances not?"

The "why" question has a number of fairly obvious answers -- not all consistent with each other.  A city is often a magnet for extremely poor people looking for better opportunities than those afforded in their current locations.  A city is often segregated and stratified, with high barriers to exit; so poor people are concentrated in their cores.  Extreme poverty reproduces extreme poverty, as businesses and other social activities exit the core.

The question, "what circumstances help a city to avoid these outcomes?" also has some obvious answers.  Robust business growth promotes jobs at a range of skill levels, so unemployed unskilled people (usually poor) are able to find work and to climb the ladder of economic advancement.  The presence of a well funded and robust social welfare net helps the poor population. A high degree of civic pluralism in the population facilitates easy movement across the neighborhoods and jobs of the city.   And there are virtuous circles at work among these factors: more job growth enables more pluralism, and helps to fund more social welfare spending; which in turn stimulates more job growth.

As we contemplate these social processes in the contemporary U.S. city, it is instructive to think about an important historical example as well.  In this context it is interesting to reread Gareth Stedman Jones' Outcast London: Study in the Relationship Between Classes in Victorian Society, a brilliant piece of social and urban history first published in 1971.

Stedman Jones frames his narrative around the shocking puzzle that London presented to the English nation in the first half of the nineteenth century.   London was the cultural, financial, and political center of England, a world city with a privileged and affluent population.  But at the same time it was the home to a large population of extremely poor people who fell under the general label of "casual labor."  And, as Stedman Jones points out repeatedly, educated London had almost no conceptual framework within which to categorize the social reality of the slum.

In fact, there was a growing perception of "two Englands" and two races of English people -- the poor and the rest.  As Stedman Jones makes clear, the political economists of the mid-nineteenth century devoted a good deal of their time to the effort to decipher this paradox of wealth and poverty.  Malthus placed much of the responsibility for the slums of London on over-population; slum dwellers represented the cutting edge of "positive checks" on population growth.  Alfred Marshall, on the other hand, took a more benign view of the possible future of the working class; he argued for a gradual process of improvement that lifted the quality of life for many poor people.


Economic institutions are the product of human nature, and cannot change much faster than human nature changes.  Education, and the raising of our moral and religious ideals, and the growth of the printing press and the telegraph have so changed English human nature that many things which economists rightly considered impossible thirty years ago are possible now. (S-J, 9, quoting Marshall in "How far do Remediable causes influence prejudicially (a) continuity of employment, (b) the rates of wages?")

But there was a lower end of the lower class in Marshall's worldview: the "residuum" of people who would never benefit from the rising tide.


Marshall expressed the prevailing opinion when he characterized the 'residuum' as those who are limp in body and mind'.  The problem was not structural but moral.  The evil to be combated was not poverty but pauperism: pauperism with its attendant vices, drunkenness, improvidence, mendicancy, bad language, filthy habits, gambling, low amusements, and ignorance (11).

So Marshall's diagnosis of extreme poverty came down to something akin to a biological moral theory: there is a segment of humanity who cannot benefit from the progress of civilization and the economy.  And London was ground zero for this segment:


London was regarded as the Mecca of the dissolute, the lazy, the mendicant, 'the rough' and the spendthrift.  The presence of great wealth and countless charities, the unparalleled opportunities for casual employment, the possibility of scraping together a living by innumerable devious methods, all were thought to conspire together to make London one huge magnet for the idle, the dishonest, and the criminal. (12)

Dock labor was the largest source of casual-labor employment in these decades, and it was notoriously prone to fluctuation.  And the collapse of traditional industries left even more people unemployed.  S-J quotes George Godwin in an ethnographic mode:


At the corners of the streets may be seen groups of youths of the age from 16 to 20 (evidently not of the vicious class), lean, wan and ragged. On speaking to these lads, they will tell you that they are sons of silk weavers: they have no employment: some have tried to get into a man of war, but being over 15 years of age have been refused: they have tried to enlist into the army, but their chest or height would not pass inspection. (102)

In order to treat these conditions rigorously Stedman Jones provides a careful analysis of the dynamics of the casual labor market in London in the mid-nineteenth century and its high degree of seasonality, and demonstrates that economic insecurity and immiseration were the foundation of slum culture.  He quotes Henry Mayhew from London Labour and the London Poor


Where the means of subsisence occasionally rise to 15s. per week, and occasionally sink to nothing, it's absurd to look for prudence, economy, or moderation.  Regularity of habits are incompatible with irregularity of income... it is a moral impossibility that the class of labourers who are only occasionally employed should be either generally industrious or temperate. (263)

An interesting feature of Outcast London is the dual perspective that Stedman Jones takes: he offers a narrative of economic change and social class; but he also dissects the intellectual frameworks through which economists and policy makers sought to understand these processes.  So the book does a good job of both describing the economic circumstances as well as the shifting theories through which British intellectuals and the public tried to make sense of these circumstances.

Here is the interesting and relevant conclusion of Stedman Jones's argument: in the end, it was not dissoluteness or poor morals that condemned the extreme poor to their stations, but simply the lack of economic opportunity presented by the urban environment of London in the 1850s.  It was the lack of jobs, not the lack of morals, that constructed the great slums of London.
Posted by Dan Little at 4:49 PM

Lack of jobs, or overpopulation? Then Malthus was right in this sense. No one is entitled to a meaningful job with a living wage, after all.

Malthus claimed that the reason for the existence of poverty was simply overpopulation - and that enough food couldn't be produced to feed everyone (along with a ridiculous mathematical calculation to prove his theory). that's why, he said, surplus population better be left alone for the "common good" - death of any sort was labeled as "positive checks" on population. It was a move to promote the elimination of the welfare policy in Britain, and to divert the sensitive issues of unequal distribution, exploitation etc. There is still many Malthusians around. We have to be aware of what regulations they want to legitimize on the basis of "overpopulation" rhetoric. See those who promote genetically modified foods for the "third world" for example.