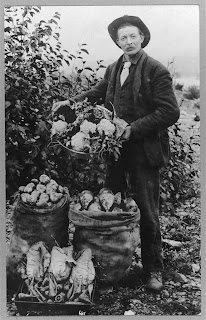 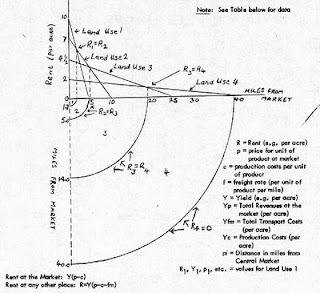 The study of economic history reveals a number of different patterns when it comes to agricultural production and the standard of living of a given population in a region.  Let's think about the issue in very simple terms.  Imagine that the standard of living for a population in a region is determined by the amount of grain that each household is able to acquire in a time period.  Grain is produced on farms using labor and technology (water, traction, fertilizer, pesticides, harvest tools).  Output is influenced by the existing agricultural technology and the quantity of labor expended in the farming process.  At a given level of technology and a given practice of labor use, a certain quantity of grain Q can be produced for the population P (farmers and their families).  If population is stable and if land area, technology, and labor use remain constant, then the total amount of grain produced remains constant as well and the standard of living remains level at Q/P.

Now several things can begin to change.  First, consider a steady population increase over time.  If land, technology and labor remain constant, then the standard of living falls, since Q remains constant while P increases.  So how can this population sustain and perhaps improve its standard of living?  It needs to increase the output of grain at a rate at least equal to the rate of increase in population.  And this can be done in several ways.

First, the population can bring more land into cultivation.  Population increase leads to more farm labor; more farmers can farm the additional land; and if agricultural technologies and practices are unchanged, then output will increase proportionally to the increase in population; so the standard of living will remain constant.  This assumes, however, that the new land is of equal productivity to existing land; but as the physiocrats observed, generally new land is of lower productivity.  So in this scenario, output would increase more slowly than population, and the standard of living would slowly decline.  We might call this extensive growth; technique and labor practices remain constant, but the arable land area increases (at the cost of deforestation and loss of common lands).

Second, more labor can be applied to the process of cultivation to increase output, using traditional farming practices.  More frequent weeding and destruction of pests takes time, but it increases output.  So if population is rising and land extent and productivity are constant, it is possible to offset the tendency for average output to fall, by applying more labor to the process.  Family labor, including children, can be expended more and more intensively in order to achieve additional gains in output.  But, of course, the marginal product of these additional hours of labor is small.  This process is familiar from the history of agriculture; Chayanov calls it "self-exploitation" (The Theory of Peasant Economy

) and Clifford Geertz calls it "agricultural involution" (Agricultural Involution: The Processes of Ecological Change in Indonesia

).  The standard of living may remain fairly constant, but the work load for the farm family increases over time.  Naturally, this process reaches a limit; eight hours a day of farm labor is sustainable; twelve hours is difficult; and eighteen hours is unsupportable.  (Here is an explanation and application of Chayanov's theory to the circumstances of Sri Lanka; link.)  We can call this involutionary growth or labor-intensive growth.

A third possibility is somewhat more positive for the standard of living and quality of life.  Intelligent farmers can recognize opportunities for improving and refining existing techniques and practices.  A better kind of sacking material may do a better job of protecting the harvest from rats; a bicycle-powered irrigation pump may increase the amount of water available for crops, thus increasing the harvest; a different form of labor cooperation across households may permit more effective seeding during the appropriate season.  So the traditional practices can be refined, permitting an increase of output with a constant quantity of land and labor.  This is what Mark Elvin refers to as "refinement of traditional practices" in his pathbreaking analysis of the "high-level equilibrium trap" (The Pattern of the Chinese Past

).  It is an incremental process through which the productivity of the traditional farming system is increased through a series of small refinements of practice and technique.  Improvement in productivity permits an improvement in output per person; but if population continues to increase, then soon these gains are erased and the standard of living begins to decline again. 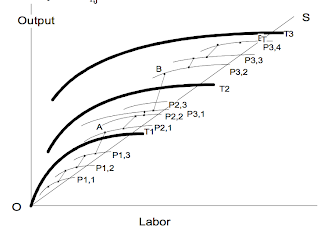 A fourth possibility is even more dramatic.  The fundamental technologies in use may be qualitatively improved: manure may be replaced by bean curd, which in turn may be replaced by chemical fertilizers; seed varieties may be significantly improved through selective breeding; electric-powered pumps may improve the availability of irrigation; small tractors may replace oxen and many person-hours of labor.  This kind of improvement in productivity can be represented as a jump from one of the heavy curves above to a higher "production possibility frontier."  And this enhancement of agricultural productivity can result in massive increases in the quantity of grain relative to the farming population -- thereby permitting a significant improvement in the standard of living for the farming population.  This can be referred to as modern technological productivity growth.

Two problems arise at this point, however.  First is Elvin's fundamental point about Chinese agriculture: these significant technological improvements require a significant social investment in scientific and technical research.  And if a population has already approached a subsistence trap -- a level of population at which intensive labor and existing farm technology only permits a near-subsistence diet for the population -- then there is no source of social surplus that can fund this research investment. (This is the core of his theory of the high-level equilibrium trap: farming techniques and practices have been refined to the maximum degree possible, and population has increased to the point of subsistence.)

Another problem is equally important.  The sorts of productivity improvements described here are "labor-expelling": the size of the labor force needs to fall (unless more land is available).  So the standard of living may rise for the farm population; but there will be a "surplus population" that is excluded from this improvement in productivity.  (This is a process that James Scott describes in Green-Revolution Malasia in Weapons of the Weak: Everyday Forms of Peasant Resistance

.)  And at this point, the only hope for improvement of the standard of living for this segment of the population is for economic growth in another sector -- manufacturing or service -- where the labor of displaced farmers can be productively used.

So there are three large patterns, with several structural alternatives among the growth scenarios. 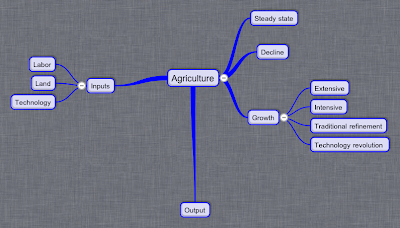 One of the underlying economic problems of the U.S. in the 1920s was that, despite rapidly improving agricultural technology, a large part of the farm population was poor, and getting poorer. A major success of the New Deal -- possibly accidental -- was in stabilizing agriculture, to allow the application of advancing technology and to allow the migration of labor to cities. Output per acre began to rise markedly from roughly 1935 for a wide variety of important crops.

The charts here:
http://greedgreengrains.blogspot.com/2009/04/six-stylized-facts-about-us.html
are quite interesting, though I don't think the blog author has any reliable insight into what was happening in 1935.
This also might be interesting to you, in regard to your thesis:
http://greedgreengrains.blogspot.com/2009/07/conservation-programs-drive-crop.html