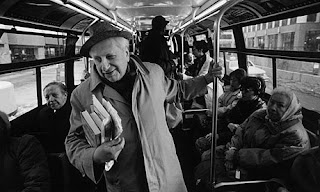 Is there a place within the social sciences for the representation of concrete, individual-level experience?  Is there a valid kind of knowledge expressed by the descriptions provided by an observant resident of a specific city or an experienced traveler in the American South in the 1940s?  Or does social knowledge need to take the form of some kind of generalization about the social world?  Does sociology require that we go beyond the particulars of specific people and social arrangements?

There is certainly a genre of social observation that serves just this intimate descriptive function: an astute, empathetic observer spends time in a location, meeting a number of people and learning a lot about their lives and thoughts.  Studs Terkel's work defines this genre -- both in print and in his radio interviews over so many years.  A particularly good example is Working: People Talk About What They Do All Day and How They Feel About What They Do

.  But Studs is a journalist and a professional observer; does he really contribute to "sociological knowledge"? (See this earlier post on Studs.)

Perhaps a better example of "concrete, individual-level experience" for sociology can be drawn closer to home, in Erving Goffman's work.  (Here is an earlier discussion of some of Goffman's work; link.)  Here are the opening words of The Presentation of Self in Everyday Life


I mean this report to serve as a sort of handbook detailing one sociological perspective from which social life can be studied, especially the kind of social life that is organised within the physical confines of a building or plant. A set of features will be described which together form a framework that can be applied to any concrete social establishment, be it domestic, industrial, or commercial.

The perspective employed in this report is that of the theatrical performance; the principles derived are dramaturgical ones. I shall consider the way in which the individual in ordinary work situations presents himself and his activity to others, the ways in which he guides and controls the impression they form of him, and the kinds of things he may and may not do while sustaining his performance before them. In using this model I will attempt not to make light of its obvious inadequacies.  The stage presents things that are make-believe; presumably life presents things that are real and sometimes not well rehearsed. More important, perhaps, on the stage one player presents himself in the guise of a character to characters projected by other players; the audience constitutes a third party to the interaction -- one that is essential and yet, if the stage performance were real, one that would not be there. In real life, the three parties are compressed into two; the part one individual plays is tailored to the parts played by the others present, and yet these others also constitute the audience. Still other inadequacies in this model will be considered later.

The illustrative materials used in this study are of mixed status: some are taken from respectable researches where qualified generalisations are given concerning reliably recorded regularities; some are taken from informal memoirs written by colourful people; many fall in between. The justification for this approach (as I take to be the justification for Simmel's also) is that the illustrations together fit into a coherent framework that ties together bits of experience the reader has already had and provides the student with a guide worth testing in case studies of institutional social life. (preface)

Goffman's text throughout this book relies on numerous specific descriptions of the behavior of real estate agents, dentists, military officers, servants, and medical doctors in concrete and particular social settings.  Here are a few examples:


[funerals] Similarly, at middle-class American funerals, a hearse driver, decorously dressd in black and tactfully located at the outskirts of the cemetery during the service, may be allowed to smoke, but he is likely to shock and anger the bereaved if he happens to flick his cigarette stub into a bush, letting it describe an elegant arc, instead of circumspectly dropping it at his feet. (35)

[formal dinners] Thus if a household is to stage a formal dinner, someone in uniform or livery will be required as part of the working team. The individual who plays this part must direct at himself the social definition of a menial. At the same time the individual taking the part of hostess must direct at herself, and foster by her appearance and manner, the social definition of someone upon whom it is natural for menials to wait. This was strikingly demonstrated in the island tourist hotel studied by the writer. There an overall impression of middle-class service was achieved by the management, who allocated to themselves the roles of middle-class host and hostess and to their employees that of maids -- although in terms of the local class structure the girls who acted as maids were of slightly higher status than the hotel owners who employed them. (47-48)

[hotel kitchens] The study of the island hotel previously cited provides another example of the problems workers face when they have insufficient control of their backstage. Within the hotel kitchen, where the guests' food was prepared and where the staff ate and spent their day, crofters' culture tended to prevail, involving a characteristic pattern of clothing, food habits, table manners, language, employer-employee relations, cleanliness standards, etc. This culture was felt to be different from, and lower in esteem than, British middle-class culture, which tended to prevail in the dining room and other places in the hotel. The doors leading from the kitchen to the other parts of the hotel were a constant sore spot in the organization of work. (72)

So Goffman's sociology in this work is heavily dependent on the kind of concrete social observation and description that is at issue here.  Much of the interest of the book is the precision and deftness through which Goffman dissects and describes these concrete instances of social interaction.  This supports one answer to the question with which we began: careful, exacting and perceptive description of particular social phenomena is an important and epistemically valid form of sociological knowledge.  Studs Terkel contributes to our knowledge of the social world when he accurately captures the voice of the miner, the hotel worker, or the taxi driver; and a very important part of this contribution is the discovery of the singular and variable features of these voices.

At the same time, it is clear that Goffman goes beyond the concrete descriptions of restaurants, medical offices, and factory floors that he offers to formulate and support a more general theory of social behavior: that individuals convey themselves through social roles that are prescribed for various social settings, and that much social behavior is performance.  (This performative interpretation of social action is discussed in an earlier post.)  And this suggests that there is a further implicature within our understanding of the goals of sociological knowledge: the idea that concrete descriptions should potentially lead to some sort of generalization, contrast, or causal interpretation.
Posted by Dan Little at 9:50 PM

If I remember correctly, Bourdieu criticised Goffmann and the symbolic interactionists for trying to explain interactions in terms of the particular situation of the interaction, without taking into account the structure of social space and the positions of the actors in that space?

What I see as a necessary extension in Goffman's work is a serious inquiry into the reasons individuals do what they do. Frame analysis and the definition of the situation are a step in this direction, as is the work on embarrassment and other emotions, but I'm still left wanting to go deeper into the heads of the actors. From my brief readings of Schutz, it seems that he goes in this direction, though what I've read has stayed at the very abstract level. It seems to me that bringing together the approaches of Goffman and Schutz would be very fruitful. Do you know of any work that has attempted anything like this? If you could do a post comparing Goffman to Schutz, that would be awesome.

Christian, if you haven't already, I suggest reading Bourdieu's Distinction and his Logic of Practice. This may lead you to think about these issues in a completely different way. -Ben

Ben, thanks for the tip. I haven't read those yet, but I've been wanting to dig into Bourdieu.

David Swartz's book Culture and Power: The Sociology of Pierre Bourdieu is also a great introduction if you're in a hurry. -Ben