What now for Michigan? 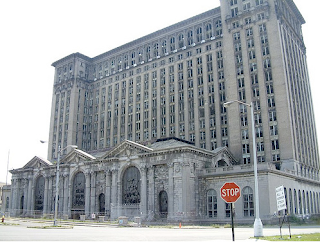 The Detroit Regional Chamber Leadership Conference at Mackinac has come and gone. Leaders from all sectors in Southeast Michigan participated in discussions about how the state might move forward and regain the vitality and quality of life that the state has lost in the past decade. All agree that the state faces very tough challenges. And solutions and strategies were put forward. Central themes included a range of strategies -- Create more jobs.... Improve K-12 schooling.... Create and retain more college graduates.... Improve the climate for business and entrepreneurs.... So there are ideas about what is needed, and there are organizations investing effort in achieving some of these goals.

So why might one board the ferry from the island with a sense of disappointment? For a few reasons. First, there are a number of critical social issues that got no public discussion at all: the persistence and depth of urban poverty in each of Michigan's cities, the continuing reductions the state is imposing on the social services budgets, the enduring inequalities the state accepts along racial lines, and the state's stubborn refusal to face up to its fiscal crisis, to list several. One might imagine that these problems would disappear if and when the state's economic crisis abates; but I'm not persuaded of that.

A more fundamental source of disappointment is the lack of serious, realistic analysis of the problems we face in the state and what interventions might actually succeed in addressing them. The lack of realism in these discussions is often truly staggering. There are exceptions, of course; for example, Lou Glazer's efforts at Michigan Future are data-driven (link), and the Citizens' Research Council has done great work on the fiscal crisis of the state (link). But all too often various political and business leaders have picked out one small issue and have tried to present it as a comprehensive strategy. For example, leaders in state government tout the opportunity represented by alternative energy and the manufacture of windmills. But there is no honest calculation of the likely scope of labor force demand created by this sector; and to date, the numbers are tiny. The state has lost over 800,000 jobs in the past eight years, and windmill manufacture has the potential to employ a few thousands. So how can this be a realistic avenue for "putting Michigan to work again"?

Similar comments might be made about the idea that Michigan should focus on biotechnology. The state has assets in this field, to be sure, including world-class researchers in many of its universities. But how many states and regions have already declared themselves for the future of biotechnology (including Pittsburgh, several of whose leaders spoke at the conference); and how many are likely to succeed? So picking out alternative energy and biotech as the primary areas of growth in the state sounds sexy but unrealistic.

More credible is a broad strategy of improving the human capital and quality of life of the state. Logically, it makes sense that dramatic improvement in K-12 education, educational attainment, and college graduation will add a broad-based and fungible resource to the state's arsenal for productive activity in the future. And equally, it seems very logical that creating appealing, safe, and fun cityscapes will be conducive to productivity, quality of life, and business growth. (These are Richard Florida's central insights in the CreativeClass.) So investments in education and the urban environment seem to be very practical ways of increasing the prosperity of the state in the medium run. (The unemployment rate of baccalaureate adults is about 1/3 that of high school graduates in the state right now.)

But significantly, each of these areas of public investment has declined in the past 8 years. State support for K-12 and post-secondary education has declined significantly over the past eight years. All cities and municipalities in Michigan are facing a current and severe fiscal crisis because of declining property values and revenue sharing, and this crisis will get dramatically worse in the next 5-10 years. So improving urban quality of life is not being supported either.  (Proposal A makes matters worse, since it means that it will take many years for cities to regain the tax base they lost during the real estate meltdown in the past several years; link.)  So the result is that Michigan is disinvesting in exactly the factors that hold out the greatest promise for improvement in the next 15 years.

It is possible that there is no intelligent solution to Michigan's crisis -- no smart strategy that could be pursued by public and private organizations that would do this set of things in order to bring about that set of good results.  It is possible that regions come out of economic tailspins only through a lot of trial and error, and sometimes they come out in a much reduced state.  Nothing guarantees that the end of this story will be a happy one, resulting in a prosperous society of 10-12 million people moving forward confidently.  In other words, it may be that repairing deep economic and social damage is essentially beyond our ability.  But one would want to think otherwise.  We would want to think that there are investments and reforms that can be adopted now that will make recovery most likely and full.  And we would want to think that it is possible to identify some of the broad structural obstacles to productive growth, and work to remove these.  Each of these efforts is likely to bear fruit -- much as a baseball team increases the odds of success by recruiting and cultivating strong players, working on the essentials of teamwork, and removing the process issues that may be in the way of success.
Posted by Dan Little at 4:33 PM

I saw this article in WSJ on Saturday: front page. Very sad.

"Black Flight is the New Worry For Detroit".

For WSJ searching for the title of the article works better than posting a link. The searched for links seem to bypass the pay wall.