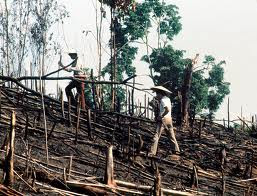 Clifford Geertz's contributions are wide-ranging, in a couple of ways. He wrote about North Africa as well as Indonesia; and he touched on Islam as well as water systems. So there was both geographical as well as topical diversity in his research life.  But here is another dimension of range: Geertz demonstrated a surprisingly wide variation of methodology and theoretical framework in his many studies of Indonesia. I am particularly struck by the conceptual distance between two important studies of Bali and Java. Both these studies are relevant to long processes of economic and social development. But the perspectives taken are quite divergent.  (Geertz provides an appealing account of his early career in Available Light: Anthropological Reflections on Philosophical Topics.)
The first is Geertz's 1963 book, Agricultural Involution: The Processes of Ecological Change in Indonesia

, and the second is his 1981 book, Negara: The Theatre State In Nineteenth-Century Bali

. The first is a close and detailed reading of agricultural practices in Java.  Geertz examines the progression and the social and ecological settings of two major agricultural regimes -- swidden and sawah (slash and burn and rice paddy).  It is a material ethnography, spending a great deal of effort on the nature of labor practices and the ecological setting of agriculture. It is historical, looking to identify the ways in which the Dutch colonial regime and rising population produced a distinctive social-cultural response in agricultural society.  And it provides an enduring thought paradigm for understanding traditional agriculture, the idea of involution. This is basically the idea of a fine division of task to assure a place for every working adult within the farm economy.

With the steady growth of population came also the elaboration and extension of mechanisms through which agricultural product was spread, if not altogether evenly, at least relatively so, throughout the huge human horde which was obliged to subsist on it. Under the pressure of increasing numbers and limited resources Javanese village society did not bifurcate, as did that of so many other "underdeveloped" nations, into a group of large landlords and a group of oppressed near-serfs. Rather it maintained a comparatively high degree of social and economic homogeneity by dividing the economic pie into a steadily increasing number of minute pieces. (Geertz 1963:97)

The productive system of the post-traditional village developed, therefore, into a dense web of finely spun work rights and work responsibilities spread, like the reticulate veins of the hand, throughout the whole body of the village lands. (Geertz 1963:99)

This is a strikingly materialist treatment of rural Javanese society, with essentially no symbolic interpretation.  Here is how Geertz describes the book in 1991 (link):

The book was originally intended as a prolegomena to a general analysis of Indonesian society. But after I published it, such a project seemed premature, so I more or less set it aside and addressed myself to a series of other issues in Indonesian sociology.  As a result, its very close relation to my work overall has tended to go unnoticed, and the book has become something of an orphan with a special history of its own.

The second book is very different. Negara is a thoroughly symbolic interpretation of Balinese politics and local life, and organizes its gaze through interpretation of the semiotics and history of the "theatre state." Here is one passage in which Geertz describes his view:

The expressive nature of the Balinese state was apparent through the whole of its known history, for it was always pointed not toward tyranny, whose systematic concentration of power it was incompetent to effect, and not even very methodically toward government, which it pursued indifferently and hesitantly, but rather toward spectacle, toward ceremony, toward the public dramatization of the ruling obsessions of Balinese culture: social inequality and status pride. (2)

This study is a great example of symbolic or interpretive anthropology; countless aspects of Balinese social life, behavior, and architecture are interpreted in terms of the ideas associated with the theatre state. But the book also gives a lot of attention to some of the social-material aspects of social life in Bali. Particularly interesting is Geertz's treatment of the control of irrigation water through a set of channels and gates. And this part is an exquisite example of micro-analysis of social coordination. Where the two narratives come together is in the role of symbolic hierarchy in organizing both systems.
One thing that I find interesting about the pair of books, beyond the detailed content, is the remarkable distance in thought frames that they represent. They almost give the impression of being the product of different authors. So what explains this distance?
One piece of the answer is simply time. Agricultural Involution was researched and written in the 1960s, drawing on fieldwork from the 1950s, when Geertz was a young anthropologist. Negara was written in the 1980s, following the extensive development of Geertz's pathbreaking ethnographic ideas of the 1970s.  So a part of the difference between the two books is simply the result of the growth and development of Geertz's ideas.  But I think the two books support something else as well: that really great social scientists are not captive to their own intellectual presuppositions.  It is possible for a Geertz or a Sahlins to treat a topic in a way that represents a fresh approach, an innovative set of ideas.
Another book of Geertz's that I find very interesting is Islam Observed: Religious Development in Morocco and Indonesia

(1968). This work is different from each of these examples -- and again provides a strikingly original contribution to the task of thinking culture.  Here again there is also a critical contribution that is useful in many areas of the social sciences: Islam is not a single, unified "thing" across the many Islamic societies and communities in which it exists.  It is valuable to probe in specific detail some of the distinguishing characteristics of Islam in North Africa and in Indonesia; and the finding of heterogeneity is one that applies to a much wider swath of behavior, consciousness, and culture than simply religion.
Here is a superb archive of almost all of Geertz's corpus (link). (Thanks to Isaac for the link!)
Posted by Dan Little at 7:30 AM