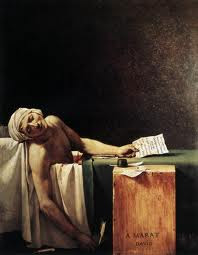 Rousseau's political philosophy probably represents the richest and most adequate view of the moral foundations of the state of any of the great figures in the history of political thought. But it is also complex and opaque. Rousseau is usually cast as falling within the social contract tradition, according to which the legitimacy of the state depends on the hypothetical consent of the governed. This puts him in discussion with Hobbes and Locke. But he had substantive and radical ideas about freedom and equality that separate him sharply from these British theorists. His ideas about freedom and equality made him a prime candidate for the title, "philosopher of the French Revolution". He offered a sometimes mysterious theory of the "general will" as the central focus of politics; but philosophers have offered wildly different interpretations of the meaning of this concept. And, unlike Locke, Hobbes, or Mill, Rousseau had an elaborate theory of psychology -- the motivations that lead social actors to behave as they do and the processes of social construction through which they come to have these characteristics. This theory appears to fit into his social philosophy, but it isn't perfectly clear how.

It is for these reasons that Josh Cohen's recently published Rousseau: A Free Community of Equals

is such an important contribution. The book is an exceptional achievement. Cohen offers a coherent, developed interpretation of Rousseau's theory; he provides clear statements of the central ideas and shows how they tie together; and he makes use of virtually all of Rousseau's enormous corpus to tease out Rousseau's intricate line of thought. Cohen demonstrates that Rousseau's theory is not simply a series of aphorisms, but is rather a detailed and subtle logical argument, with premises and inferences that can be rigorously reconstructed. It is a full philosophy of politics. Most basically, Cohen shows how philosophical principles, institutional assumptions, and psychological theories are intended to tie together into a coherent view of a democratic society.

This is an enormously difficult task to have accomplished. Just take the Social Contract as your starting point and you are inclined to emphasize chiefly the relations between institutions and freedom. Just take Emile or the Confessions as the point of origin and the emphasis will be on the individual's development. And if you begin with the more applied parts of Rousseau's work -- the constitution for Poland, for example -- and you are likely enough to get lost in a forest of institutional details. In other words -- three Rousseau's. Cohen has paid close attention to all these components of Rousseau's thought, and he has succeeded in showing how they all contribute to a single, coherent line of thought.

The key idea in Cohen's construction is the notion of a "free community of equals." (This is also the subtitle of the book.) Each part of the phrase demands analysis -- equality, freedom, and community, and unpacking them provides a basis for a nuanced and powerful political philosophy. The phrase also invokes the central problem of political philosophy, the contradiction between security and freedom: how is it possible to find personal security within a state (and therefore being subject to coercive laws), while fully maintaining one's freedom and autonomy? Here is how Cohen puts the solution he attributes to Rousseau:


The essential point about content is that Rousseau's solution requires that individuals commit to regarding themselves as belonging to a political community whose members are committed to regarding one other as equals: acknowledging one another as political equals, with equal status in establishing the laws; recognizing one another as equally subject to the laws; and agreeing to regulate their association by reference to reasons of the common good, which gives equal weight to the good of each citizen. (Kindle loc 221)

This formulation captures every element of the solution: equality, the common good, and a consequent situation of full autonomy. The citizen is autonomous (self-legislating) because he/she has willed the creation of exactly this system of law. The common good referred to here is the "general will"; and Cohen makes a good case for understanding that this concept is one that comes down to the individual perceiving and willing outcomes that serve the whole of the citizenry.

Citizens also have their own particular interests; so the situation described here, where all citizens give priority to the common good over their particular interests is one that requires a fairly specific bundle of institutions and motivations. And Cohen demonstrates that Rousseau methodically explores these institutional and behavioral requirements.

Cohen analyzes the idea of a community as being regulated by the general will into a conjunction of four conditions:
It is evident that these are strong conditions. So it is incumbent on Rousseau (and Cohen) to demonstrate that they are singly possible and jointly consistent. If these points cannot be established, then the idea of a general will is useless. If the conditions are possible and consistent, then there is a further question to investigate: what empirical conditions (institutions, processes of individual moral development) are needed to establish and sustain them?

Another fascinating line of thought in the book is Cohen's attempt to reconstruct Rousseau's argument for the "natural goodness" of the human being. It is a complex argument and one I found highly convincing as an interpretation of Rousseau. And the issue is simply crucial; if this argument cannot be made out, then the free community of equals is an impossibility.

Much of Cohen's work here is that of philosophical reconstruction: what were Rousseau's positions and reasons? This is descriptive work, and doesn't require that Cohen evaluate the theory. (In fact, we can ask the question whether this is simply a hypothetical reconstruction of a Rousseau-like theory, or whether we are to understand that Rousseau actually had these logical connections and explications clearly in mind.) But beyond the explicative work, it is plain that there is much in Rousseau's conceptions of equality, freedom, participation, and democracy that Cohen admires deeply and regards as fruitful for contemporary discussions of democracy. There are also a few important threads that he is distinctly not pleased by: in particular, the exclusion of women, of course, and Rousseau's sometimes incipient communitarianism. The latter makes for the possibility of an ethnically or nationalistically grounded community, rather than a community of simple moral equals. And Rousseau sometimes seems to suggest that only a highly uniform community is likely to satisfy the conditions above -- a discouraging finding for those of us interested in a creating a democratic, multicultural world.

There is a particularly important meta-level point that emerges from Cohen's book and that seems to be fully embedded in Rousseau's thought process: the importance of addressing the question of social justice in full detail from three interrelated perspectives. We need a convincing set of moral principles that help to define what the most important features of a just society are. We need an analysis of some of the institutional requirements that these principles present; an idea of the kinds of institutions that could satisfy the principles. And we need an analysis of human psychology -- both the fixed parts and the malleable parts -- that would either support or undermine these institutions and principles. In other words, social philosophy requires a concrete study of institutions and psychology if we are to succeed in arriving at convincing and practical models of a good society. And Rousseau seems to have understood this imperative in greater detail than other contributors to the traditions of political philosophy.

Here is a schematic representation of major parts of Cohen's analysis of Rousseau: 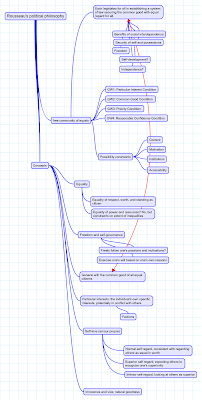 Awesome mindmap! What software did you use to generate it? If you have mindmaps like this on other subjects, I think your readers would appreciate seeing them along with your posts (at least I would).

Ed-- The graphic was produced using iThoughtHD on the iPad. I'll try to find ways of using other such concept maps -- I agree with you that they're useful. Thanks for the comment.

The social conflict and the description of an ideal society are almost the same between the western and eastern philosophies, but the approaches of thinking between the two are quite different. For example, security is emphasized in both western and eastern philosophy, but freedom is not emphasized that much in Chinese philosophy. The substitution of freedom in Chinese culture might be harmony. But if you can get harmony, then you are not troubled with the conflict between freedom and security. The different perspectives of conceptualization make the two philosophies move on two different paths.