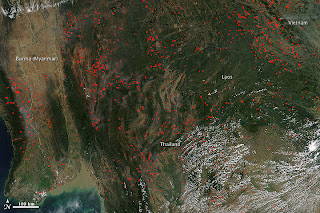 An earlier post described James Scott's recent book on the segment of Southeast Asia that he refers to as Zomia (The Art of Not Being Governed: An Anarchist History of Upland Southeast Asia

).  As noted there, Scott turns in his usual creative, imaginative, and innovative treatment of the subject matter; the book is an absolutely captivating argument about the push and pull between states and fugitive peoples.  As such, it suggests the possibility of bringing some of the central ideas and analyses to bear on other geographies as well.  But how accurate is Scott's reading of the primary historical experience of these parts of Southeast Asia -- Burma, Thailand, Vietnam, China, Cambodia, and Bangladesh?

This is the question posed by the current issue of the Journal of Global History (link), with essays by C. Patterson Giersch, Magnus Fiskesjo, Sarah Turner, Sara Shneiderman, Bernard Formoso, and Victor Lieberman.  All the essays are fascinating, including the editorial introduction by Jean Michaud.  But particularly important is Lieberman's essay.  Lieberman is one of the leading contemporary historians of Southeast Asia, and he is a very fertile and imaginative thinker himself.  So his responses to Scott's arguments are worth looking at closely.  (His most recent volumes, Strange Parallels: Volume 1, Integration on the Mainland: Southeast Asia in Global Context, c.800-1830 (v. 1)

, are directly relevant to Scott's analysis.)

Lieberman begins by establishing the territory on which he agrees with Scott. First, he accepts the fact of a growing separation between lowland and highland peoples in Southeast Asia during early modern times, and he agrees about the importance of analyzing this pan-Southeast Asian phenomenon.

Another point of agreement is the fact of highlander agency. Lieberman agrees with Scott's insistence that highland peoples throughout Southeast Asia crafted their own social worlds in response to the political and natural environments that faced them. He writes:


Scott's basic thesis is that highland societies, far from living in isolation, have been profoundly and continuously moulded by their relation to plains-based kingdoms. (333)

He notes that Scott's approach turns the narrative of state-building on its head; highland peoples were defined in terms of state-avoidance. The lowland states had an interest in gathering manpower and taxes, and the highland peoples had a persistent interest in evading both. Lieberman writes:


Scott claims that these processes transformed Southeast Asia's mountainous interior into a vast "shatter zone," an area of flight, a sphere of asylum and marronnage for runaways from state-making projects in the plains. (334)

Scott's central achievement, then, is to bring hill peoples into the mainstream of regional history by uncovering their relation to lowland states and societies. (336)

So Lieberman acknowledges the importance and boldness of Scott's effort at providing a comprehensive historical study of Zomia.  But Lieberman offers a series of important criticisms of Scott's historical case.

First, he finds Scott's documentation to be weak, in that it makes little use of Burmese-language sources. This has led, in Lieberman's opinion, to a number of errors of fact, some more significant than others. He cites estimates of literacy, for example; Scott says less than 1 percent of people were literate in Southeast Asia, and Lieberman documents 50 percent for Burma in 1800.

More significantly, Lieberman believes Scott over-estimates the importance of manpower as a determinant of military success in the region. The degree of maritime commerce was equally important, he argues. And this is critical to Scott's argument, since competition for manpower is one of the primary reasons Scott cites for the efforts of lowland states to attempt to dominate the highlands.

Finally, and most important, Lieberman argues that there is little documentary evidence for significant population flight from lowland to highland (339). This is key to Scott's interpretation, and Lieberman argues the evidence isn't there to support the claim. After reviewing Scott's own evidence and some additional data of his own, he writes:


All in all, outside central Vietnam perhaps, this remains a rather limited record of displacement and flight. (341)

Moreover, Lieberman argues that Scott's interpretation of the highlands becomes so dependent on one causal factor, state oppression, that it neglects the processes of development that were internal to the highland societies themselves. "Ecological and cultural conditions that were intrinsic to the hills and that were substantially or completely divorced from the valleys receive little or no attention" (343).

This point is more important when we consider an example not included in Scott's analysis -- the highland peoples of Borneo/Kalimantan. Lieberman argues that these tribes had virtually all the characteristics of culture and agriculture displayed by Zomians, including swidden cultivation and a proliferation of local languages, and Scott interprets these traits as deeply defensive. Yet these features of highland life emerged in Borneo without the pressure if a surrounding predatory lowland state (345). And this casts serious doubt on Scott's anarchist, anti-statist interpretation of Zomia.

Lieberman's point isn't that Scott's interpretation of Zomia is unsupportable. Rather, his point is that it is a bold and substantive interpretation of a complex historical domain, and it requires serious, fact-based consideration. And this is exactly what the essays in this special volume of Global History promise to do.

This debate is interesting and important, in part, because it sheds light on the practical empirical research challenges that arise when we consider bold new interpretations of social data.  A bold hypothesis is advanced, purporting to pull together the processes of development observed in a variety of places; and then there is the practical question of evaluating whether the hypothesis is born out when we do the detailed, local historical research needed to test its basic assertions.  In this case, Lieberman is suggesting that several of the components of the theory are found wanting when applied to highland Burma.

(The image above is a satellite-based survey of fires across Southeast Asia (link), relevant to the practices of swidden farming.)
Posted by Dan Little at 4:02 AM

Frederik Barth reviews Scott's book in the journal Science, vol. 328, p. 375 (2010). As someone working on comparative methods, this aspect of Barth's critique stands out to me:

“his conclusions seem weakened because of a failure of comparative method … I felt overwhelmed by a spate of brief comparisons and one-liners about much of the world … If we are to draw useful conclusions, we need features to be systematized and the connections among them to be illuminated” (p.175).

Rigorous scholarship is not just about getting your sources and data correct -- it is also about using appropriate comparative methods as part of the inferential structure.

The art of not being govern is one of the most interesting books i've ever read in my whole life. however, i've got one problem with the term "Zomia". The term is coined by Dutch social scientist William Van Schendel after his field work in India's north-east. he actually borrow the term from the Mizo (some called themselves Zomi, Chin, Zo, Zhou etc) tribal of North East India. Since, i belong to this tribal group and i'm sure zomia is not a Mizo/Zomi term at all. Rather a corrupt form of Mizo/Zomi...to be precise, European mispronunciation of the Mizo language..

The art of not being govern is one of the most interesting books i've ever read in my whole life. however, i've got one problem with the term "Zomia". The term is coined by Dutch social scientist William Van Schendel after his field work in India's north-east. he actually borrow the term from the Mizo (some called themselves Zomi, Chin, Zo, Zhou etc) tribal of North East India. Since, i belong to this tribal group and i'm sure zomia is not a Mizo/Zomi term at all. Rather a corrupt form of Mizo/Zomi...to be precise, European mispronunciation of the Mizo language..

"Lieberman argues that there is little documentary evidence for significant population flight from lowland to highland (339).

This deepens on what might count as relevant or important data in answering the research..?i guess,finding local oral traditions are pre-requisite when conventional archive indicates little evidence. Similarly, Osborne (South East Asia: Introductory history, 1979) and Scott drew their source of information from the oral traditions of highland societies recorded by colonial ethnographers and latter American anthropologist i'm not trying to defend james's argument..but there are evidences from the oral tradition of zomia in the North East India.Their origin, migration and their interaction with the surrounding empires are encoded in a number of oral traditions. Oral tradition indicates that during the construction of Great Wall of China (Wan-Li Qang-Qeng),The Chinese empire has recruited a large number of slave workers from the surrounding tribes and ethnic groups. thus, similar to James C. Scot’s suggestion, many tribal groups of China were dispersed in order to escape the oppression of the Chinese state project.

After all, what can we expect conventional sources especially when ethnic group moves away from the state without the notice of the state.

The issue of Borneo as a counter-example is puzzling: perhaps there wasn't a dpominant lowland group that displaced people into the hills or up the river, but colonialism and outside traders sure pushed some people up stream and away.