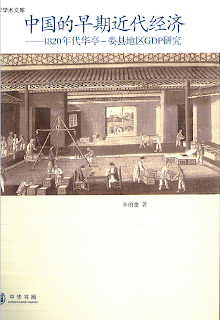 Li Bozhong is one of China's most influential economic historians, and he is undoubtedly the most internationally connected.  Much of his work in the past several decades has been devoted to constructing a detailed economic history of the lower Yangzi Delta (for example, Agricultural Development in Jiangnan, 1620-1850)

.  His findings have been crucial empirical contributions to the "involution" debate (link, link, link) about whether the Chinese economy was stagnant and significantly less productive than the European economy.  Thanks to his research we now have a much more informed understanding of the economic dynamics of the Lower Yangzi region in the early modern period (1620-1850).  And his research largely supports the "no involution, significant productivity growth" interpretation.  (Ken Pomeranz has a nice review of Agricultural Development in Jiangnan, 1620-1850 here.)

Li's most recent book has now appeared in Chinese, and it takes an important step forward in terms of methodology.  (The cover and title are included above.  The book includes an extended summary in English, which allows non-Chinese speakers to get the highlights of method and findings.)  The important step that Li introduces here is a first effort to apply the methodology of historical national accounts to China. Essentially this method allows the researcher to use the discipline of GDP accounting to arrive at systemic and internally validated estimates of economic activity in a region over a period of time.  (Jan-Pieter Smits, Edwin Horlings, and Jan Luiten van Zanden provide an extensive and detailed description of the method in "Dutch GNP and its Components, 1800-19193" (link).  Olle Kranz describes the method in application to Sweden here.)

Li's current book is a massive effort (over 600 pages), but it is itself only a pilot project for a more ambitious study to come in future years.  Li has selected one limited district within his previous area of study in the lower Yangzi Delta (Huating-Lou), and attempts to apply the method of historical GDP to this limited region for a single period of time (1823-29).  His goal is to determine whether the discipline and method of historical GDP can shed new light on the scattered economic statistics and materials that more traditional economic histories have assembled.  The results are highly interesting, and they challenge several key assumptions that have been made about the early Qing economy.

Li hopes for two advantages from this approach.  The first is that it provides a unified framework within which to organize and validate existing economic data.  "Because the methods of the GDP study are quite elaborate and standardized, they can provide a coherent macroeconomic framework covering the whole economy" (603).  And the second is to provide a consistent basis for comparison with other historical regions where the same methods have been utilized.  This means that the kinds of comparisons suggested by recent work in Eurasian economic and demographic history will be enhanced as other scholars apply the methodology to European regions.

Huating-Lou is roughly a single county, Songjiang County, with an area of 870 square kilometers and a population in 1816 of 563,052.  (From the maps it appears that the county falls squarely within the current city of Shanghai.)  So the area covered by Li's study is a microcosm of the larger economic region in which it is lodged; Jiangnan had a population of roughly 36 million in the mid nineteenth century.  Li makes use of the same kinds of data sources he has used in earlier works: gazetteers, agricultural handbooks, and modern field investigations of the region (in particular, the Japanese South Manchurian Railway Company studies from 1937-41). Essentially Li proceeds by transforming the variety of data provided by these sources into a uniformly formatted table of national accounts. 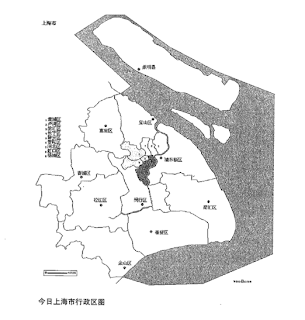 The method involves attempting to estimate the magnitude of economic activity in several sectors by assessing production, expenditure, and income. The idea is that the data for these three aspects of the economy are fairly independent; but they should be expected to lead to similar estimates of overall economic activity. (If production estimates indicate a region is producing 10 million yuan of goods, but income estimates indicate only 2 million yuan of income, we can be assured that there is an important data inconsistency.) The method involves making use of the System of Historical National Accounts to provide a unified framework for collecting and presenting the economic data. (See also a paper by Frits Bos describing the use of national accounts as a tool for economic history (link).)

Here is a description of this method as implemented by Luiten van Zanden and colleagues for the Netherlands (link):


Our main method is to gather specific information on annual output and added value in each of the most important economic branches, following the System of National Accounts (SNA) used in contemporary economic-statistical research. The starting point is the production approach; the branches that are being reconstructed include agriculture, herring fisheries, peat extraction, production of textiles, sugar and paper, to name but a few. Weights will be derived from a reconstruction of the structure of the labour force in three moments in time: 1510/14, 1670/80 and around 1800. Combined, the chronological series and the data on the structure of the labour force will serve as a basis for estimating developments in the level and structure of national income. 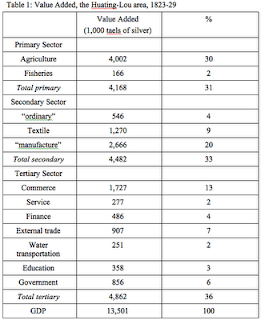 Second, the sectoral composition of the Huating-Lou economy is genuinely surprising (as indicated in table 1). We commonly think of China's Ming-Qing economy as largely rural and agricultural. But the primary sector, including agriculture and fisheries, amounts to only 31% of the local economy, while the secondary sector (manufactures and textiles) contribute 33% and the tertiary sector (commerce, service, government, etc.) contributes 36%. The prior expectation we might have had of the early modern Chinese economy as largely agricultural is flatly refuted for this region by the 1820s. This finding is corroborated by Li's analysis of the structure of employment in the region; only 27% of employment was in the primary sector, with 56% in the secondary and 16% in the tertiary sectors.

Third, Li points out that the composition of income is also somewhat surprising. Wages represented 61% of the Huating-Lou economy; rent 11%; interest 3%; profit 20%; and depreciation 6%. What is surprising about this estimate is the unexpectedly low percentage of all income that derived from rent -- contradicting the idea that the Chinese economy was a rent-dominated one. (Earlier work by Victor Lippit (Land Reform and Economic Development in China: A Study of Institutional Change and Development Finance

) sought to estimate the total surplus created by the Chinese rural economy; he estimates 10.7% of income from rent, 3.4% of income from farm business profits, and 2.8% from rural interest payments.  See Understanding Peasant China: Case Studies in the Philosophy of Social Science

, pp. 121-22, for more discussion.  Li's estimates of rent and interest are about the same as Lippit's, whereas Li's estimate of profits is substantially higher than Lippit's.)

All of this is highly interesting, though (as Li emphasizes throughout), it is based on only one small region during one limited time period.  So it will be very interesting to see whether it is possible to perform this kind of analysis for larger parts of the historical Chinese economy.

Estimating economic activity was one of the goals of this research.  The other was to establish a consistent basis for comparison across different parts of Eurasia.  Li takes up the comparison with the Netherlands that is made possible by the work mentioned above by Jan-Pieter Smits, Edwin Horlings, and Jan Luiten van Zanden (link). And indeed, the comparisons are very interesting.  Here is the comparison of the sectoral composition of Huating-Lou and the Netherlands:

And here is the comparison for the structure of employment:

The one comparison that Li does not highlight (in the English summary, anyway) is the GDP per capita comparison between Huating-Lou and the Netherlands.  This comparison raises some of the issues involved in a recent discussion here of the standard of living (post), since the Dutch analysis is denominated in guilders and the Chinese work is denominated in taels of silver.  Smits, Horlings and van Zanden estimate a Dutch population size of  2,163,092, implying a GNP per capita of 227 guilders per capita.  Recall that Li estimated a per capita GNP of 24 taels.

So what is the conversion of tael to guilder? Here I have to go beyond my own specialized knowledge and speculate a bit, so this calculation shouldn't be taken uncritically.  The guilder was defined in 1840 as equivalent to 9.45 grams of fine silver (link).  A tael was equivalent to 37.3 grams of silver, according to Li. So in silver equivalents, the Dutch GDP per capita was 227*9.45 grams of silver, and the Chinese GDP per capita was 24*37.3 grams of silver -- 2,145 grams versus 895.2 grams.  By this estimate, the early nineteenth-century Dutch economy produced a silver equivalent per capita over two times that of the Chinese economy.  However, the purchasing power of silver was significantly greater in China than Europe; so this estimate overstates the disparity in real wage between the two regions.  In "Real Wages in Europe and Asia: A First Look at the Longterm Patterns" Robert Allen estimates the wage basket for China at 247.3 grams of silver, versus 579.7 grams of silver in England (link, pp. 180, 182).  If we took the wage basket as the basis of a cost-of-living deflator, then the disparity between the Netherlands and China essentially disappears.  The Dutch GDP per capita PPP-adjusted product is 3.7 against a 3.6 per capita PPP-adjusted product for China, using the wage basket as deflator.  This would indicate that the Dutch economy was marginally richer than the Chinese economy in the lower Yangzi region -- but not by much.

Li finishes this comparison by raising the question of traditional versus modern economies.  Both economies considered here contradict the assumptions of a "traditional" economy -- largely rural, largely agricultural, and largely stagnant.  Instead, these comparisons indicate a surprisingly urban, manufacturing- and service-based economy in the second decade of the nineteenth century, and Li argues that we can appropriately describe each of them as a "modern" economy.

Li's book is an important new contribution to Chinese economic history, and the historical GDP method seems to be a highly fruitful innovation. It is a really valuable new analytical perspective on the Chinese economy.  I hope the book will be translated into English as quickly as possible.
Posted by Dan Little at 5:51 PM