The politics of cultural despair 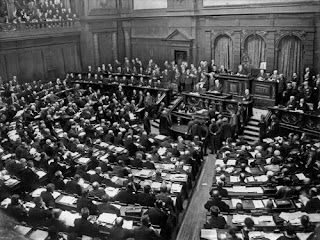 The last century gave us far too many examples of the rise of extremism in mass societies -- both democratic and authoritarian.  Some of the political mechanisms of extremist seizure of power are well known -- paramilitary force, extremist organizations, demogogic leaders, hyper-heated rhetoric, appeals to nationalism and racism, and inflammatory mass media.  But it's also worth asking -- what is the cultural basis for the rise of various extremisms?  What factors in the ideas, thoughts, and emotions of a population have sometimes led to the rise of extremist states -- fascism, ethnic cleansing, murderous nationalism, or deranged communism such as the killing fields of Cambodia?  Does philosophy play a role in the rise of extremism?

For observers born since 1930 a natural place to raise this question is the rise of National Socialism in Germany.  How could a party dedicated to an explicit programme of racism, repression, and murder have gained mass support and control of the state in Germany?

A particularly important early effort to answer this question was Fritz Stern's pathbreaking The Politics of Cultural Despair: A Study in the Rise of the Germanic Ideology (1961), now fifty years old.

The book is a careful intellectual history; but it is more than that.  It is an effort to link a set of philosophical ideas to a series of political developments that involved increasingly wide circles of German citizens.  So it serves as one example of how we might think about the relationship between large cultural ideas and currents, and more specific developments in politics.

Stern opens the book with these words:


This is a study in the pathology of cultural criticism.  By analyzing the thought and influence of three leading critics of modern Germany, this study will demonstrate the dangers and dilemmas of a particular type of cultural despair.  Lagarde, Langbehn, and Moeller van den Bruck--their active lives spanning the years from the middle of the past century to the threshold of Hitler's Third Reich--attacked, often incisively and justly, the deficiencies of German culture and the German spirit.  But they were more than critics of Germany's cultural crisis; they were its symptoms and victims as well.  Unable to endure the ills which they diagnosed and which they had experienced in their own lives, they sought to become prophets who would point the way to a national rebirth.  Hence, they propounded all manner of reforms, ruthless and idealistic, nationalistic and utopian.  It was this leap from despair to utopia across all existing reality that gave their thought its fantastic quality. (1)

These three figures were important cultural voices in Germany, even though they were undistinguished within the academic world.  Paul de Lagarde (1827-1891), Julius Langbehn (1851-1907), and Arthur Moeller van den Bruck (1876-1925) were intellectual and cultural precursors for the ideology of National Socialism.  They were harsh, vitriolic critics of modern German social life; they were anti-Semites; and they were wedded to a discourse of passion and hatred as devices for influencing their readers.

The central focus of this cultural criticism was the fact of modernity -- liberalism, secularism, Manchesterism, consumptionism, and individualism.  These were conservative critics; they favored an earlier time that was more traditional, moral, hierarchical, and religious.  They preferred villages and towns to cities; they preferred cultivated thinkers to merchants and professionals, and they feared the rise of the proletariat.

By liberalism they meant to encompass several ideas: individualism, self-interest, parliamentary government, and glorification of commerce and the market.  And their criticisms were unswerving: they hoped to turn back all of the liberal democratic and industrial transformations that modern Europe was undergoing.


The movement did embody a paradox: its followers sought to destroy the despised present in order to recapture an idealized past in an imaginary future. They were disinherited conservatives, who had nothing to conserve, because the spiritual values of the past had largely been buried and the material remnants of conservative power did not interest them.  They sought a breakthrough to the past, and they longed for a new community in which old ideas and institutions would once again command universal allegiance. (7)

The conservative revolutionaries denounced every aspect of the capitalistic society and its putative materialism.  They railed against the spiritual emptiness of life in an urban, commercial civilization, and lamented the decline of intellect and virtue in a mass society.  They attacked the press as corrupt, the political parties as the agents of national dissension, and the new rulers as ineffectual mediocrities.  The bleaker their picture of the present, the more attractive seemed the past, and they indulged in nostalgic recollections of the uncorrupted life of earlier rural communities, when men were peasants and kings true rulers. (9-10)

In addition to their critique of a rising liberalism in Germany (and Europe more generally), these critics were also united in a virulent anti-Semitism.  Their denunciations of the Jews became a common thread in Nazi propaganda in the 1920s and 1930s.

Stern makes the important point that these three writers depended on the emotions and the passions rather than reason and argument to express themselves.  "All three wrote with great fervor and passion.  They condemned or prophesied, rather than exposited or argued, and all their writings showed that they despised the discourse of intellectuals, denied reason, and exalted intuition" (4).  Here is a particularly important observation of the nature of this cultural criticism that appears to be relevant in our own time as well.  Julien Benda, a liberal thinker, noted that political discourse "began to play the game of political passions.... Our age is indeed the age of the intellectual organization of political hatreds" (6).

Stern has two fundamental aims in this study.  First, he hopes that the study of these three cultural critics will illuminate an important current of history: Germany's drift towards extremism and anti-Semitism.


This study, then, takes up the origins, content, and impact of an ideology which not only resembles national socialism, but which the National Socialists themselves acknowledged as an essential part of their legacy.  But it will also point to another link, admittedly less tangible--to wit, that the Germanic critics in the peculiar tension between their lives and their ideological aspirations anticipate the type of malcontent who, in the 1920's, found a haven in the idealism of the Hitler movement.  ... We may not have sufficiently reckoned with the politically exploitable discontent which for so long has been embedded in German culture. (5)

But second, the book is interested in popular culture as well.  How did ordinary Germans fall prey to mobilization and propaganda based on nationalism, violence, and anti-Semitism?  Stern tries to show through a detailed study of the cultural framework expressed by these thinkers, that we can also attempt to reconstruct the modes of popular consciousness that percolated through German society in these decades.  These ultra-conservative currents helped to make even ordinary people susceptible to the efforts at mobilization that were directed towards them by the National Socialists.

Are there parallels in twentieth-century America?  Stern thought there were, in 1961.


Cultural pessimism has a strong appeal in America today.  As political conditions appear stable at home or irremediable abroad, American intellectuals have become concerned with the cultural problems of our society, and have substituted sociological or cultural analyses for political criticism. ...  There is a discontent in the Western world that does not stem from economic want or from the threat of war; rather it springs from dissatisfaction with life in an urban and industrialized culture -- a dissatisfaction that the three critics discussed in this book felt and fostered. (13, 14-15)

Two elements seem especially relevant in today's political culture: the willingness of some voices in the political sphere to engage in the emotional hyperbole and hatred that were the stock-in-trade of these German critics; and the extremist language surrounding the rejection of "liberalism" that is to be found in the airwaves today.  Today too we are confronted with a virulent rejection of many aspects of a "liberal" world, and an apparent yearning for an earlier (mythical) time when there was one defining moral-religious framework to which all of society subscribed.

One of the greatest failures of German liberals and academics in the 1920s and 1930s was their inability -- perhaps even their unwillingness -- to make the positive case for a modern, liberal society.  The values of justice, equality, citizenship, and mutual respect embodied through decent economic and political institutions need to be defended; and German thinkers fell short in this historical task in the early twentieth century.  It is certainly important for Americans in the early twenty-first century to be more successful in making this case.

(Here is Fritz Stern on Fora.tv:)

I've been thinking about Weimar myself recently--lots to talk about of course, but sometimes I wonder if one problem was that all the classical liberals immigrated to the Americas. I have my own ancestors who did, for example, in the wake of the failure of '48.

I've long agreed that Germany (and Japan) suffered acutely from a high rate of industrialization and modernization--in their cases, it was a kind of system shock to their societies, imposed top-down by authoritarian governments. (Arguably we saw the same in Russia, too, though in their case the totalitarian coup happened during that modernization, not after. And of course it's happened in China, too, though that's an interesting exception--in the case of China, so far it hasn't engendered a nostalgic, semi-religious, xenophobic ideology of militarism and foreign conquest. It's interesting to wonder why.)

The case of China is marked by deliberate, planned economic growth aligned to western consumerism.

Arguments surround whether this can be maintained, especially in the face of environmental damage, but this is also aligned to an accelerating cultural development that counters "cultural despair".

Most news about China today concerns the 300 milliion people who have been brought out of poverty, rather than the billion who have not. The level of "system shock" is therefore difficult to judge.