How are people's political beliefs, concerns, and passions influenced within a modern mass society? There are many mechanisms, certainly: family, school, place of worship, place of work, and military service, to name several.  But certainly the various channels of the media play an important role. Newspapers, television and radio, social media, and blogs have a manifest ability to focus some parts of the electorate on one issue or another.

So it seems worthwhile to ask whether it is possible to perform some empirical study of the content and value systems associated with various media channels.  (Here is a textbook by Klaus Krippendorff on the use of content analysis in journalism and the media; Content Analysis: An Introduction to Its Methodology

.) This question falls into several parts: first, are there important differences in content and tone across various media channels? And second, what effects do these configurations of content and tone have on the users of the media?

The Pew Research Center's Project for Excellent Journalism offers a window into the first of these questions with a fascinating new tool (link).  The "Year in the News Interactive" tool is the front end of a valuable database that codes various media streams according to content.  The database is then searchable so that the user can produce reports on the percentage of the "newshole" devoted to a particular issue or person in a particular medium.  Here is a sample of what the tool produces: 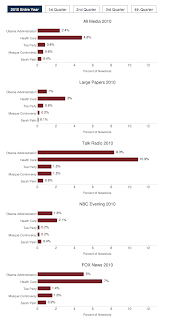 This chart repays close examination.  It picks out five segments of media -- "All Media," "Large Papers," Talk Radio," "NBC Evening News," and "Fox News," and it compares these outlets with respect to five issues: Obama Administration, Health Care, Tea Party, Mosque Controversy, and Sarah Palin.  These are highly politicized issues, so it is interesting to see how the patterns of treatment differ across different segments of the media.

If we consider "All Media" as a benchmark -- representing the average amount of attention given by the media as a whole to various issues -- we see that Talk Radio and Fox News show a few remarkable patterns.  Both sources give the mosque controversy more than twice the percentage of the newshole; likewise the Tea Party gets twice as much attention with Talk Radio and Fox News as with All Media.  Fox News gives Sarah Palin over twice the exposure she gets from All Media -- and nine times the exposure she gets from Large Papers.  Both Talk Radio and Fox News give an inordinate amount of air time to Health Care and the Obama Administration. 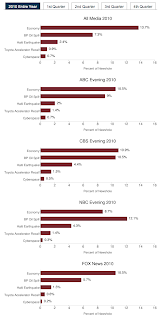 Here the main contrast that seems evident is that Fox News devotes significantly less time to the non-political issues.  Fox devoted about half the percentage of its newshole to the BP Oil Spill compared to NBC news; Haiti got roughly a third the amount attention on Fox; and the Toyota Accelerator Recall got less than half the exposure as it received on NBC news.

At a minimum, this shows something pretty interesting: the regular viewer or listener to Fox News and Talk Radio will get a very different view of the world from the person exposed to All Media or Large Papers.  These media channels give an inordinate amount of airtime to "hot button" issues that have the potential of inflaming their viewers.  And these channels spend much less time that the other media on non-political issues -- Haiti, Toyota recall, or Cyberspace.

What would be particularly interesting in today's environment is an additional dimension of content analysis, reflecting antagonism, intolerance, and hostility.  It would be very useful to have a few years of data on the percentage of the newshole devoted to incendiary reporting about issues, individuals, and the government.  Many observers have the definite impression that this kind of language has increased dramatically; it would be very useful to have quantifiable data on this topic.

(As we think about the tenor and extremism of some of the voices in political media today, it is sobering to remember the role that "hate radio" played in the Rwandan genocide; link.)
Posted by Dan Little at 10:35 PM

Consider Fox News and Talk Radio as new media. I wonder if the predominance of hot-button topics there compared with more traditional (lamestream) media relates to the increasing blurring of truth and opinion in America today. Is American democracy now at a stage where truth - whether of facts like Obama's birth, or of scientific truths like global climate change - is sincerely seen as a matter of opinion on which people are free to disagree and then vote on? i.e. is the world becoming political all the way down?

Its indeed a Gr8 post about NEW MEDIA'S in a good democracy.

You bring up two interesting - and analytically feasible - questions.

1) With regard to the existence of empirical studies of content and value systems associated with various media channels:
A vast literature exists that through content analysis of news media, seeks to explain the elements that may influence the production of news content, including but not limited to individual, organizational, regulatory, ownership, ideological, economic, and cultural factors.


2) With regard to the additional dimension of antagonism, intolerance, and hostility in news content:
I haven't come across any scholarly studies to date that have addressed this. But I believe that in the next year or two we should see some studies in this area. I'll keep my eye out for any. Content analyses tend to be time-consuming and at times expensive. It would be very interesting to compare political discourse from before and after President Obama's election to determine if it has changed, and if so, the extent to which it has.

The average person watches up to 4 hours maybe even 5 hours of television a day. That means they go to work 9 to 5 then watch television and go to bed. What a crummy way to live your life.

It would be very useful to have a few years of data on the percentage of the newshole devoted to incendiary reporting about issues,