.  The diagram is often referred to as "Coleman's boat." Here are two versions involving different examples (8, 10): 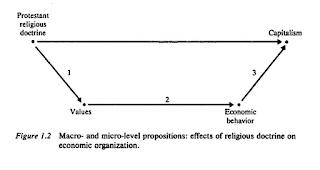 Macro is at the top; micro is at the bottom; and the arrows indicate possible pathways of causal influence.  Coleman illustrates his idea with the example of a simulation game.


Such a game is composed of the following:

A set of roles that players take on, each role defining the interests or goals of the player
Rules about the kinds of actions that are allowable for players in each role, as well as about the order of play
Rules specifying the consequences that each player's action has for other players in the game

It is this structure which corresponds to the two transitions I have described: macro to micro and micro to macro. The first of these transitions is mirrored in the player's interests, given by the goal established by the rules; the constraints on action, which are imposed by other rules; the initial conditions, which provide the context within which action is taken; and after the game is in play, the new context imposed by others' actions. The second transition is mirrored by the consequences of the player's action: how it combines with, interferes with, or in any other way interacts with the actions of other ..., thus creating a new context within which the next action takes place.
...
There is no tangible macro level. The answer is that the macro level, the system behavior is an abstraction, nevertheless an important one. (11-12)

In his detailed and insightful discussion in Methodological Individualism: Background, History and Meaning

Lars Udehn labels the arrows this way, with three forms of causal connection that are valid for Coleman (300):

Type 4 connections -- macro to macro -- are ruled out ("the macro level is an abstraction, nevertheless an important one"; Coleman 12); so causal influence for macro factors can only work through disaggregated effects at the micro level.  We might refer to Type 3 connections as aggregative, and Type 2 as formative; Type 3 represents the composition of the macro-level effect through the activities of individuals at the micro-level.  And Type 2 represents the "shaping" or "forming" of individuals that occurs when a macro-level entity affects them -- schools, norms, institutions.  Type 1 are connections within the individual's psychology and agency.


In structural individualism, on the other hand, actors are occupants of positions, and they enter relations that depend upon these positions.  The situations they face are interdependent, or functional related, prior to any interaction. the result is a structural effect, as distinguished from a mere interaction effect. In addition to natural persons, then, there are social positions and corporate actors made up of social positions. The behaviour of social systems is, at least in part, determined by the structure of those systems. (304)

So according to Udehn's interpretation, Coleman diverges from strict methodological individualism in that he admits the "structural" effects of organizations and positions within them: that these system-level characteristics have effects on social behavior at the individual level that are different from the mere aggregation of independent interests among individuals.  Further, Udehn highlights the fact of socialization: the fact that individuals are socialized by macro-institutions, with the result that their behavior at the micro level is already conditioned by features of the macro value system -- ways of thinking, ways of valuing, ways of interpreting. "Every individual living in society is socialised and internalises, in varying degrees, the values and beliefs prevailing in the society, or group, to which he/she belongs" (301).

Let's try to illustrate this inter-levels explanation problem with a fairly simple example.  Suppose we notice that a certain country has chronic fiscal crises surrounding its effort to fund a naval expansion.  We also observe that this country has an abnormally high rate of tax evasion. As a consequence, government revenues are lower than they would otherwise be.  We would like to explain this collective fact of high tax evasion.  We might consider three possibilities:
Hypothesis 1 supports a Type 2 explanation: the moral system of the population as a whole forms the consciousness and moral sensibilities of individuals to become tax evaders; their individual actions aggregate to a low tax collection rate.

What I have objected to in this picture, without formulating it very clearly, is that it seems to require social explanations to proceed through the actions of individuals.  Essentially it seems to imply that only agent-based simulations will provide acceptable explanations of "macro-macro" effects; which means that we are compelled to give up the Type 4 (macro-macro) explanation in favor of a trip through Coleman's boat, formalized with an agent-based simulation.

The position I would like to defend is two-fold and is a defense of Type 4 explanations. First, macro entities (organizations, institutions, normative systems) have stable characteristics with behavioral consequences. Second, those entities must have microfoundations; we must be confident that there are individual behaviors at lower levels that support these macro characteristics.  But third, it is legitimate to draw out the macro-level effects of the macro-circumstance under investigation, without tracing out the way that effect works in detail on the swarms of actors encompassed by the case.  I've referred to this possibility as "relative explanatory autonomy" of the meso-level (link, link, link).  And the requirement of microfoundations is not a requirement on explanation; it does not require that our explanations proceed through the microfoundational level.  Rather, it is a condition that must be satisfied on prima facie grounds, prior to offering the explanation.

(Another important exponent of the programme of methodological individualism is Jon Elster.  Here is Udehn's paraphrase of Elster's version of MI:

As Udehn points out, this puts Elster much closer to the "narrow individualism" end of the spectrum than Coleman.)
Posted by Dan Little at 11:26 AM

I wonder how Levi Martin deals with Coleman in his last book.

As you probably know, there are in physics many examples of systems that admit microscopic and macroscopic examples.

The canonical example is thermodynamics, which can be given a microscopic basis in terms of statistical mechanics.

In practice microscopic-macroscopic explanations do not exclude each other.

Even when a well established microscopic foundation is available, there are systems for which microscopic explanations are unfeasible and one has to rely on purely macroscopic reasoning.

Reductionism, in a word, does not work in general.