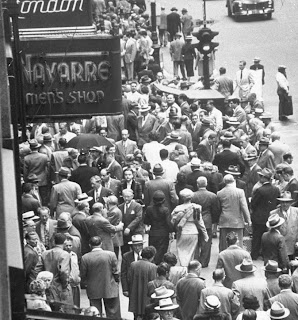 What role do subjectivities play in the composition of society? How does subjectivity influence social functioning, social structure, and social relationships?

By subjectivity I mean considerations that have to do with the mental state of an observer or participant: for example, stereotypes about race or religion, propositional attitudes, attitudes towards other people, understandings of social situations and rules, representations of others' states of minds, and so on. Essentially, people come to the world with ideas, attitudes, expectations, and understandings that are "in their heads."  These are abstract, intangible, personal, and private.  And yet these forms of subjectivity also have concrete intersubjective social effects.

Here is an example. Suppose individuals in a society have expectations about how people ought to behave in certain circumstances, and also have expectations about how some subgroups -- teenagers, people of other religions or races, people from other parts of the country -- are likely to misbehave relative to those expectations. These expectations are all subjective in the sense that they are embedded in the individuals' cognitive and affective systems. And they are then projected onto the local world of social interaction. The individual perceives the activities of others, and he/she behaves, in part, out of consideration of the attitudes and preconceptions that he/she possesses. So these representations are subjective; they are internal to the individual's cognitive-affective system.

This kind of interaction among actors, perceptions, and frames is closely related to the kinds of phenomena that Erving Goffman and Harold Garfinkel study in many works. Each of these micro-sociologists approaches the problems of social action and structure from the perspective of the practices, thoughts, and frameworks that the actors bring to the social interaction.  And they try to discern how the practices reveal frameworks, and how the frameworks drive conduct.  When we recognize that human actors are sensitive to and reactive to even minor cues from the actors around them, we also recognize the complexity of behavioral evolution that can occur in a small group.  (I tried to think about this complexity in a post about modeling interactive behavior.)

These subjective features are often intersubjective as well, in the sense that some or most other members of the surrounding society may share these representations. So presuppositions about behavior, expectations about talent and performance, and stereotypes about other groups may be broadly shared across the individuals in a society. But intersubjectivity is still subjectivity: the fact of agreement in attitudes doesn't imply the correctness of the attitudes or expectations as a description of objective, external facts.

How do these subjective and sometimes intersubjectively shared attitudes come to have external, objective effects? How do subjective experiences and attitudes get transformed into persistent social realities? There are a couple of pathways or mechanisms that are fairly obvious. One is the fact that the individual's attitudes and presuppositions affect his/her behavior and concrete interactions with other individuals. Take racial stereotypes as an example: that fact that an individual has a set of racial stereotypes affects his/her interactions with other people, both same-group and other-group. These influences are complex: behaving in a racially polarized way presumably evokes other sets of behaviors from other individuals, and a complex dynamic of racially-valenced pattern of behavior that would not have emerged absent the subjective racial stereotypes that a certain number of the individuals brought to the arena. So this is an example of a strong effect from the subject's inner experience to the structure of a social environment.

The work done by Claude Steele and colleagues on "stereotype threat" is a good example of how attitudes can be expressed in subtle ways through behavior and words, and result in very significant changes of behavior and performance by other people (link).

Moral frameworks and assumptions about justice are also subjective, in the sense that they are features of the individual's cognitive-affective system.  These moral ideas and presuppositions too have social consequences.  Peasants who frame the landlord's behavior as fundamentally unjust are likely to behave differently from those who lack this set of ideas about justice.  And if it is widely understood that certain kinds of behavior are quick to press the "injustice" button, this may lead the powerful towards a more accommodating set of strategies with respect to the disadvantaged people in their orbit.

So it seems fairly clear and direct to say that human subjectivity is itself an important cause of a variety of forms of social patterns: forms of collective behavior, the shaping of social practices, and the adjustment and accommodation of the behavior of other actors in society.  This seems to have a fairly striking consequence, however: it seems to imply that the ways that we think about society and social relations actually has a substantial effect on the ways in which society plays out.  This is a fundamentally different situation from the natural sciences; it doesn't matter how we think about gravity, since the inverse square law applies irrespective of our beliefs.

(There is, of course, a direction of causation that proceeds in the opposite direction, from persistent social institutions to subjective states of mind. People gain their cognitive-affective tools and presuppositions through concrete, recurring social experiences. So the local society is an objective force in shaping the subjectivities of the individuals in society.)
Posted by Dan Little at 10:51 PM

You, of all people, should be doing a piece on Charles Murray's book. Talk about someone raising issues of social causation....

Or did I miss a piece by you?

But not all expectations, social judgments, or intuitions are subjective or internalized within 'the mind.' There is a wide body of evidence that suggests that everything from moral decisions to facial expressions are innate in our biology. We should be careful not to separate the mind from the body (or humans from animals, for that matter). Once you start ignoring the role of biology, you start to ignore reality and indulge in fantasy.