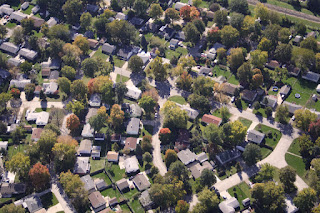 A very interesting and current sociological study of "meso"-social causation can be found in the literature on neighborhood effects over the past 15 years or so. Robert Sampson and various colleagues have offered striking new analyses and arguments that establish the importance of geo-social neighborhoods on the occurrence of a variety of important social behaviors.  And their thinking represents a concrete, empirically rigorous and theoretically well developed effort to probe the effects and mechanisms that link neighborhood to resident.

Sampson, Morenoff and Gannon-Rowley provide a review of this literature in "Assessing 'Neighborhood Effects': Social Processes and New Directions in Research" (link). Sampson's contribution to the Demeulenaere volume, Analytical Sociology and Social Mechanisms, makes explicit the connection of this line of argument to issues about causation and methodological individualism that have been important to the analytical sociology movement.

Here is the preliminary definition of "neighborhood" upon which Sampson et al depend:


Robert Park and Ernest Burgess laid the foundation for urban sociology by deﬁning local communities as “natural areas” that developed as a result of competition between businesses for land use and between population groups for affordable housing. A neighborhood, according to this view, is a subsection of a larger community—a collection of both people and institutions occupying a spatially deﬁned area inﬂuenced by ecological, cultural, and sometimes political forces (Park 1916, pp. 147–154). Suttles (1972) later reﬁned this view by recognizing that local communities do not form their identities only as the result of free-market competition. Instead, some communities have their identity and boundaries imposed on them by outsiders. Suttles also argued that the local community is best thought of not as a single entity, but rather as a hierarchy of progressively more inclusive residential groupings. In this sense, we can think of neighborhoods as ecological units nested within successively larger communities. ("Assessing," 445)

What Sampson and his co-authors want to discover is how sociologists have begun to identify and measure features of "neighborhoods" that are not simply aggregate features of individual behaviors, and how they have attempted to identify causal relations between these meso-level neighborhood characteristics and individual-level behaviors and outcomes.  They are particularly interested in health outcomes and other forms of disadvantage for children and adolescents, or what they term "problem-related or health-compromisingbehaviors among children and adolescents" (448): "infant mortality, low birthweight, teenage childbearing, dropping out of high school, child maltreatment, and adolescent delinquency" (446).

A key fact about neighborhoods and larger communities in the United States is the salience of race and poverty in residential patterns; neighborhoods are usually characterized by a concentration of racial groups and income groups.  And high-poverty, high-racial-minority neighborhoods are frequently characterized by high-negative-health outcomes.  But this is a mere correlation; what are the causal linkages between a neighborhood's characteristics and the health and behavioral outcomes of its residents?  In other words, they want to know something about the mechanisms through which these meso-level properties influence the individual resident:


During the 1990s, a number of scholars moved beyond the traditional ﬁxation on concentrated poverty and began to explicitly theorize and directly measure how neighborhood social processes bear on the well-being of children and adolescents. Unlike the more static features of sociodemographic composition (e.g., race, class position), social processes or mechanisms provide accounts of how neighborhoods bring about a change in a given phenomenon of interest (Sorensen 1998, p. 240). (447)

A more recent contribution from Sampson appears in the Demeulenaere volume discussed in several earlier posts, Analytical Sociology and Social Mechanisms.  The essay is called "Neighborhood effects, causal mechanisms and the social structure of the city," and it makes an explicit attempt to line up the neighborhood-effect literature with some of the issues of analytical sociology.  Most important is the fact that neighborhood effects are thought to be "emergent" or autonomous with respect to the individual characteristics of the people who make up the population.

Sampson's effort in this essay is to give a satisfactory definition of "neighborhood," to indicate some ways of measuring or describing neighborhood-level properties (what he refers to as "ecometrics", in analogy with "psychometrics"), and to reflect on some possible mechanisms that might work from this level of analysis to the individual level of the people who make up the neighborhood.

Here is how Sampson characterizes "neighborhood" in this piece:


I begin with a general definition of neighborhood as a variably interacting population of people and institutions in a common place. Neighborhoods form a mosaic of overlapping ecological units (e.g. blocks, streets) that vary in size, boundaries and social organizational features. (228-229)

It is the intersection of practices and social meanings with spatial context that is at the root of neighborhood effects. (230)

And he offers a somewhat different definition of social mechanism from those provided in the existing literature:


I conceptualize a social mechanism as a plausible contextual process that accounts for a given phenomenon, in the ideal case linking putative causes and effects. (230)

Sampson has quite a bit of interesting perspective on the topic of "levels" of social analysis and social causation.  Neighborhood effects are fairly proximate -- local social facts influencing local individual behavior. But Sampson believes that there are plausible mechanisms linking much more distant social conditions or circumstances to the local level as well. For example:


It is not just city-level processes that are at stake -- national and global forces can influence place stratification…. How do we go about documenting the extra-local layers of this kind of "macro-level" neighborhood effect?  … Even calls for analytical sociology are not terribly helpful, focused as they are on the relation of micro and macro (in this case neighborhood) levels, as opposed to higher order structures. What is needed is a truly systemic approach that seeks to theorize and study empirically the "articulation" function of the local community vis-a-vis the larger social world -- how organizations and social networks differentially connect local residents to the cross-cutting institutions that organize much of modern economic, political and social life. (235)


Unlike most research intentions on neighborhood effects to claim a hierarchical or "top down" primacy of neighborhoods over the individual, I have considered "side to side," "bottom up" and "bird's eye" orientations along with issues of measurement, social causality, methodological individualism, extra-local spatial processes, percepts as causation, and selection bias all as a way to address what I consider a modified analytic sociology "Coleman project". (244)

Despite the real promise of analytical sociology, I conclude that methodological individualism would do well to grant social context and macro-level factors an equal forum in theories of neighborhood effects. (245)

Ultimately, then, higher-order processes that induce structure at the neighborhood level require a different way of thinking than the individualist and largely micro-level approaches of existing experimental paradigms. (245)

Sampson's work, with a handful of different collaborators, is a very impressive example of the possibility of bringing together very rigorous quantitative methods with a social realist's interest in causal mechanisms and a non-reductionist's willingness to assign causal powers to supra-individual structures and conditions.  The systematic effort to introduce methods for observing and measuring "neighborhood-level" characteristics -- what they call ecometrics -- is a valuable addition to the toolbox for sociological analysis at a range of levels of social activity.

(Incidentally, I find it interesting that Sampson highlights some of the same difficulties of defining a concept like "neighborhood" that I discussed in an earlier post on definitions in social theory (228-229); link. Here is a particularly apt statement: "I thus define neighborhoods geographically and leave the nature and extent of social relations problematic. This conceptualization opens the door for empirical research to proceed without tautology and a menu of ecological units of analysis from which to choose depending on the theoretical constructs or social phenomenon under study" (229).)
Posted by Dan Little at 10:30 PM