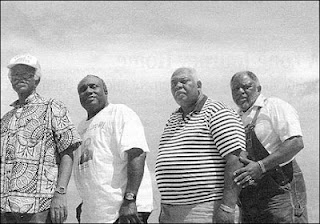 What is involved in assembling the history of a complicated period like the US civil rights movement?  This is a difficult question for any complex historical phenomenon, and there are many choices that the historian is forced to make.
The question of when to start the story is certainly an important one.  If our interest in the movement is how it worked -- who were the important leaders, how did the key organizations get started, and so forth -- then perhaps beginning in the 1950s is the right choice. This would be to look at the movement through the eyes of a sociologist. But if we really want to know what the context and causes of racial inequality were, then we need to start much earlier.  On this framing of the problem, we are interested in longterm causes and contexts, not simply the particulars of the struggle.  In this case the realities of slavery and the Jim Crow south are crucial, and the starting point needs to be sometime following the end of the Civil War.

Doug McAdam's Political Process and the Development of Black Insurgency, 1930-1970, 2nd Edition takes its orientation from specific answers to several of these questions. His fundamental goal is to understand the Civil Rights period of the 1960s as a social movement.  He wants to understand the ordinary people who came to be mobilized in marches, demonstrations, and boycotts; he wants to understand the organizations that facilitated these acts of mobilization; and he wants to understand the legal and political context within which this mobilization took place.  He begins his account in the 1950s, taking the historical facts of racial inequality and oppression as a given. And he attempts to discover the factors that led to the successes and failures of this prolonged period of activism and protest.  There is not a great deal of narrative in McAdam's book -- he doesn't tell a lot of stories of the particulars of various moments of activism, and he doesn't attempt to give the reader a strong feeling for the experience of ordinary African American participants. Instead there is a sustained effort to quantify and understand the timing and location of various moments of public activism. And he wants to understand the national and international factors that were conducive to mobilization in those years.

Taylor Branch's trilogy on the history of the same period of time takes a very different point of view (Parting the Waters : America in the King Years 1954-63). Branch's narrative gives strong priority to giving the reader a vivid sense of the actors -- from leaders like Martin Luther King, Jr., to ordinary African American participants who were inspired to great involvement in the movement.  His book is based on a wide range of primary sources, including FBI files, and it is committed to providing a detailed and accurate account of the events of the movement.  He organizes his narrative around key events (the Freedom Rides, Selma, the Memphis boycott) and key individuals (Martin Luther King, Jr., J. Edgar Hoover). The trilogy is long and detailed; and yet it doesn't answer all the kinds of questions mentioned above.

Lance Hill's The Deacons for Defense: Armed Resistance and the Civil Rights Movement pulls the screen into a tighter focus by concentrating on a smaller geography and a specific element of the movement -- the emergence of a grassroots organization that favored armed self-defense against organizations like the KKK.  Hill's narrative gives the reader a very strong sense of the places and people of this organization -- the circumstances in which they lived, the personal experiences that led them to this form of activism, and the ways in which this strategy played out in Louisiana and Mississippi.


In 1964 a clandestine armed self-defense organization formed in the black community in Jonesboro, Louisiana, with the goal of protecting civil rights activists from the Ku Klux Klan and other racist vigilantes. After several months of relatively secret operations, the group publicly surfaced in February 1965 under the name "Deacons for Defense and Justice." By the end of 1966, the Deacons had grown to twenty-one chapters with several hundred members concentrated in Louisiana and Mississippi. The Deacons guarded marches, patrolled the black community to ward off night riders, engaged in shoot-outs with Klansmen, and even defied local police in armed confrontations. (2)

The reader gets a vivid understanding of the human circumstances of white violence and organized efforts at self-defense, and the actors become real through the narrative.

These are just three examples of different approaches taken by historians and historically minded sociologists to the challenges of representing and understanding this crucial period in American history. They illustrate a basic point about historiography more generally: every historical topic admits of treatment from a wide range of perspectives and methods, and the stories that are told will provide very different insights into the history.

i intended to use a comment to ask this question:

how did the concept of "civil rights" has a long history in western civilization...how did it become associated exclusively with african-americans?

i checked wikipedia before asking...

"In early 19th century Britain, the phrase "civil rights" most commonly referred to the problem of legal discrimination against Catholics. In the House of Commons support for the British civil rights movement was divided, many more largely known politicians supported the discrimination towards Catholics. Independent MPs (such as Lewis Eves and Matthew Mountford) applied pressure on the larger parties to pass the civil rights act of the 1920s.