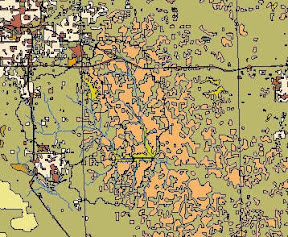 Actor-centered sociology (ACS) begins in the intuition that social processes begin in the interactions of socially constructed individuals, and it takes seriously the idea that actors have complex and socially inflected mental schemes of action and representation. So actor-centered sociologists are keen not to over-simplify the persons who constitute the social domain of interest. And this means that they are generally not content with sparse abstract schemata of actors like those proposed by most versions of rational choice theory.

Agent-based modeling (ABM) is a collection of aggregative techniques aimed at working out the aggregate consequences of the hypothetical choices of a number of individuals interacting in a series of social environments. ABM models generally represent the actors' motivations and decision rules very abstractly -- sometimes as economic actors, sometimes as local optimizers, sometimes as heuristically driven decision makers. An ABM model may postulate several groups of actors whose decision rules are different -- predators and prey, landlords and tenants, bandits and generals. The goal is to embody a set of behavioral assumptions at the actor level and then to aggregate the results of the actions and interactions of these actors at a macro level. (Stephen Railsback's Agent-Based and Individual-Based Modeling: A Practical Introduction provides an accessible introduction.)

My question here is a focused one: do these apparently similar approaches to explaining social outcomes actually have as much in common as they appear to at first glance? And the answer I'll suggest is -- not yet, and not enough. (Here are earlier discussions of the two frameworks; link, link.)

The sticking point between them is the issue of abstraction and granularity concerning the nature of the actors. ACS researchers are critical of the methodological move towards abstraction in the description of the actor. They believe that the socially embedded and rather specific features of deliberation and action that they investigate in various historical and cultural settings are crucial and are lost when we move to a more abstract desire-belief-opportunity (DBO) approach. ABM theorists argue that abstraction about the agent is necessary if a social situation is supposed to be tractable -- to model the behavior of a population of agents we need to be able to represent their decision rules in a reasonably compact and mathematically representable way. So if we take the view that each individual is a unique bundle of mental frameworks and action-practices, we will have to give up the enterprise of modeling their collective behavior.

However, some efforts to apply ABM techniques to real contemporary and historical problems -- for example, land use patterns in contemporary African agriculture -- have had disappointing results. The patterns predicted by the simulation diverge fairly significantly from the observed patterns on the ground. And some of these researchers believe that the problem lies not with the model but with the assumptions made about the actor. Those assumptions are basically Chicago-style rational choice assumptions, and researchers are coming to see that the actors -- farmers, herders, traders -- are operating on the basis of rules that are more nuanced. The actors are prudential and they make deliberative choices; but their reasoning doesn't reduce to an application of expected-utility calculation. So the researchers themselves are asking whether it would be better to incorporate more realistic assumptions about actors' motivations and reasoning frameworks.

This suggests that there is perhaps more fertile ground between the ACS and ABM frameworks than has yet been exploited. ACS focuses its attention on the question of refining our understanding of how actors are constituted, and ABM provides a rich set of techniques for transporting from assumptions about individual actors to the simulated result of aggregating these actors' behaviors onto a collective pattern.

The hybrid approach still requires abstraction about actors. But perhaps it is worth considering adjusting the focus, from "farmers in an environment" to "Kenyan farmers with X, Y, Z features of goals and reasoning schemes". Perhaps the disaggregation of types of actors needs to go even further. And perhaps the question of "what kinds of actors are involved in land use in Kenyan agriculture?" needs to be driven by empirical investigation rather than methodological fiat or computational convenience.

So maybe the great centers for complexity studies around the country would be well advised to begin including anthropologists and cultural sociologists within their research teams. And maybe the result will be a fertile marriage of modeling with greater cultural specificity.

"The actors are prudential and they make deliberative choices; but their reasoning doesn't reduce to an application of expected-utility calculation."

Makes me roll my eyes and say 'duuuuh'. But that's perhaps uncharitable. *Of course* people's decisions are based on a wide - potentially infinite - range of variables. Does anyone doubt this? Honestly, though, I would have expected ABM models to have greater predictive power.