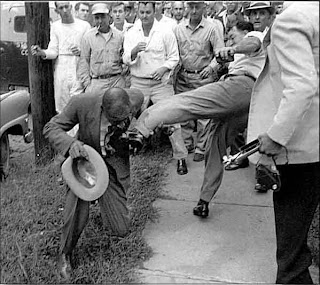 Understanding history is partly about understanding some of the dry facts of social sequence and cause and effect in the making of various periods of historical change. But it is also about coming to a more visceral understanding of the human realities of the events that historians describe.  This is particularly true in the history of the American Civil Rights movement. How can we come to have a more vivid understanding of those events and social unfoldings?

Most white Americans have a very limited understanding of the real social setting in the South of the Civil Rights movement in the 1950s and 60s. We know it was a struggle for equality and freedom, and we know that racism and segregation were key elements of the situation of African Americans in their everyday lives. But mostly we don't know the systematic violence and racial hatred that served to stabilize those social relations of inequality in cities, towns, and rural areas throughout the South.

And yet a social order based on subordination and degradation of a whole people requires a heavy use of coercion to survive.  This coercion was provided by the local and regional organizations of white supremacists who enforced the social order of the Jim Crow South.

White supremacist organizations are today an extremist fringe in American politics. They are dangerous and violent, but they do not appeal to the great majority of the American population. But in the 1950s white supremacy was a viable and widespread ideology, and white supremacist groups were mass-based and powerful organizations that were very explicitly devoted to maintaining segregation and the subordinate status of African Americans. They were explicitly racist and they were also explicitly committed to using all means necessary to resist integration and the extension of full equality to African Americans. These organizations were key to enforcement of the rules of racial separation and behavior in the South.  Key among these were the White Citizens' Councils in various southern states. And many southern politicians were open advocates of the ideology and rhetoric of WCC in the 1950s and 1960s -- often under the rhetoric of "states' rights."  (Former Mississippi governor Haley Barbour created a stir in 2010 when he recalled his own perceptions of the WCCs in nostalgic terms; link.)

Here is a description of the WCCs from an encyclopedia on the Civil Rights movement maintained at Stanford:


In response to the 1954 Brown v. Board of Education decision ending school segregation, white segregationists throughout the South created the White Citizens’ Councils (WCC). These local groups typically drew a more middle and upper class membership than the Ku Klux Klan and, in addition to using violence and intimidation to counter civil rights goals, they sought to economically and socially oppress blacks. Martin Luther King faced WCC attacks as soon as the Montgomery bus boycott, began and was a target of these groups throughout his career.

(It is interesting that I. F. Stone began writing about the violent and racist nature of the WCC almost as soon as it was formed (link).)

What this shows is that at a relatively recent time in the history of the United States these organizations competed in the full light of day, without embarrassment, and with a rhetoric that encouraged violent enforcement of the racial status quo. To see video of the faces of the young men and women who opposed the integration of the Little Rock schools following the Brown v. Board of Education decision in 1954, is to see a kind of widespread, committed hatred of another social group that is more familiar to us from Rwanda or Bosnia. (Here is a short clip of the integration of Central High School from Eyes on the Prize; link.) The murder of Emmett Till in 1955 is just the most extreme example of this kind of murderous hatred and ferocious defense of the racial order. (The murderer of Medgar Evers was a member of the Citizens' Council.)

There are several hard and important questions raised by this history. How could an otherwise decent society have created the willing participation of so many millions of people in such a cruel and unjust system? Where did the virulence of the emotions of racism and aggression come from? How is it that the moral culture of the American south was such a fertile and welcoming ground for organizations like the White Citizens Councils and the Ku Klux Klan? And most crucially -- can these strands of hated, intolerance, and violence emerge again?

This last question is perhaps the most urgent one.  Are racism and white supremacy once again threatening to become parts of mainstream politics? The NAACP has tracked connections between the modern descendant of the White Citizens Councils, the Council of Conservative Citizens, and the Tea Party (link). There are some very notable connections. This suggests that white supremacists continue to attempt to achieve their goals through politics and political mobilization.  The anti-immigrant rhetoric of some strands of contemporary conservative thought, the hyperbolic opposition to Federal legislation for equality of rights, and the equation of a politics of equality with "Communism" all have enormous resonance with the racialized platforms of the WCCs of the 1960s.

Are we sure the NAACP is a viable source?

and why should we be a priori skeptical about the NAACP?

The NAACP has an extraordinarily honorable record. Philip Black's comment seems designed to illustrate a sentence from the post: "Most white Americans have a very limited understanding of the real social setting in the South of the Civil Rights movement in the 1950s and 60s"

This is an excellent article. I'm not sure how the hatred works exactly, but it is built on an economic base that rewards the white upper class. As has been discussed much elsewhere, slavery was a beloved tradition because it was profitable, not because people just naturally hate African Americans. In fact, slavery became explicitly racist in this country as a way of mollifying the poor Europeans.

I bring this up because I think it is important to remember that there are powerful interests who encourage race hatred for their economic gain. Too often, we dismiss clear signs of racism (e.g. prison populations) as if they are just the market at work.

"at a relatively recent time in the history of the United States these organizations competed in the full light of day, without embarrassment, and with a rhetoric that encouraged violent enforcement of the racial status quo"

This is what I struggle to impart to undergraduates in teaching about civil rights - to give them a sense of how close they are to the virulent hatreds of that time. If this is understood then the students may grasp that the persistent effects of this cannot be easily dismissed as having been cured by the passage of time.

The NAACP study may help in that regard to show the linkages/history of hate groups. I'll investigate the hyperlink but approach the report with some caution - the "guilt-by-association" brush is equally dismissed by those on the left when the right makes connections between Obama-Ayers-Wright, etc.

I wonder if it would be fair to call southern US society in the 1950s 'decent'. Given the hatred directed towards communists, gay people, beatniks, and the non-religious, it isn't so surprising that black people were also attacked. And in the case of African Americans, there were particular problems - including their poverty (which made them an easy and convenient target) but also the fact that they were seen as the cause of southern poverty generally. The south lost a war over the issue of black freedom, and the south was still poorer, and much more insular, than the north. Presumably this produced a grievance still burning in the hearts of a vocal minority capable of spurring the white majority to violence, even despite the increase in prosperity brought about by the post-war economy.

Anyway, a fascinating post. Not something I'd consider deeply before, hence the fragmentary and not-particularly-helpful ideas on the subject.

Some have suggested that the history of racism in the United States should be framed within a larger dimension of economic analysis. I'm not sure if I buy that argument or not, and when I read this post, it reminds me of the importance of focusing on racism as a phenomenon unto itself that is worth studying and denouncing because of the moral ugliness of racism. What perplexes me most about the world in which we live is that since the Jim Crow era, there has been a lot of progress on the one hand, but on the other hand the insidiousness of racism seems even more complex now. That has been explained by some social scientists as being related to the shift in racism from one kind to another, and I am not sure if this is the case or not. But what I do know is that we need posts like this one to remind us of the ugliness of racism and to make us think deeply about the history of our nation; it really wasn't that long ago that our nation was engaged in overt racism of the sort that is depicted in the photograph with this blog post. So how far have we actually come in the intervening decades? It would be great to think that we've really come a long way, but I'm not sure if we have or not. One example of this is the fact that Obama was elected twice, but in each case, we had prominent white people in this country whose responses to Obama's election ranged from distaste to overt prejudice. So how exactly do we square the election of Obama with the ugliness his election produced within our nation? The Tea Party, for example, seemed to me to have a covertly, if not overtly, racist project contained within their ostensible "economic concerns." And they gained so much of our popular and elite attention that Paul Ryan came close to being the vice president of the U.S. -- though I don't think Romney really had all that much of a chance to win, to be honest.